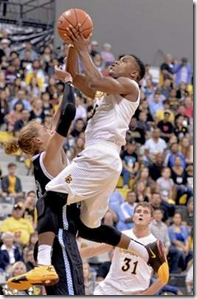 Michigan opens the Puerto Rico Tip-Off tonight against Long Beach State tonight in a game that’s projected to be the most lopsided of the tournament.

Long Beach State won the Big West regular season crown each of the last three seasons but repeating this season will be a tall order after a mass exodus of players this summer. Leading scorer James Ennis and glue-guy Peyer Pappageorge graduated while Keala King, Tony Freeman, Deng Deng and Gatate Djuma  were all were all asked to leave because head coach Dan Monson wasn’t happy with how they represented the school. “It wasn’t about rules, but attitudes”, the school’s program states. Another player, Kyle Richardson opted to play a post-graduate year at Portland State. When all was said and done, the 49ers lost six of their top eight scorers and 52 points per game combined.

Monson does have two very good, and experienced, returners in point guard Mike Caffey and big man Dan Jennings. Caffey and Jennings are the only double-digit scorers on the 49er roster and average over 30 points and 16 rebounds per game combined. Beyond that the 49ers will rely on three rotational players, two redshirts and five junior college transfers in supporting roles.

Long Beach State has already faced some fairly impressive competition but has come away empty handed. The 49ers lost to Arizona (by 33) and Kansas State (by 13) and also barely lost to Loyola Marymount by one despite controlling the game. Their lone win was against non-Division I Hawaii Pacific.

Long Beach State has struggled to shoot the ball this season, shooting 47% inside the arc and just 23% outside the arc. Shooting struggles combined with a lack of turnover discipline (coughing the ball up on 21% of their possessions) have led to a 49er offense ranked 214th nationally. Long Beach State has only managed to score over a point per possession once this season, against Loyola Marymount at 1.01 points per trip.

Defensively, there aren’t many strong points on the LBSU resume. The 49ers struggle to defend the rim, allowing opponents to shoot 58% inside the arc, but have been stellar defending the three-point shot. Long Beach State opponents are shooting just 25.8% from three-point range. The 49ers don’t force many turnovers (17.5% of possessions) but foul a lot (50.6% FTA/FGA allowed) and have struggled on the defensive glass. Long Beach State opponents around rebounding 40% of their missed shots

Jennings, a transfer from West Virginia, stands 6-foot-9, 245 pounds and is the most efficient 49er by a wide margin. He’s shooting 63% around the basket and is a top-100 rebounder on both ends of the floor, averaging a double-double in LBSU’s first four games. He gets to the free throw line often (55% FTA/FGA) but shoots just 48% at the charity stripe.

A.J. Spencer and McKay LaSalle round out LBSU’s three guard look and both players are fairly inefficient offensively. Spencer is 0-of-6 from three but 62.5% inside the arc, he turns the ball over on a quarter of his possessions but has just one assist all season. LaSalle is 7-of-27 from long range and has yet to attempt a field goal inside the arc. Spencer has been the hotter player, reaching double digits in Long Beach State’s last two games.

On paper, this looks like a perfect game for Michigan to get back on track after a frustrating loss. Here are three keys to victory:

Ken Pomeroy projects a 74-60 Michigan victory, giving the Wolverines a 91% chance of advancing to the semifinals of the Puerto Rico Tip-Off. Michigan should take care of business tonight before setting up an intriguing semifinal matchup against VCU or Florida State.

This & That:  Long Beach State has had success in preseason tournaments before, knocking off UCLA in 2009 and Xavier in 2011. Dan Monson has a career 7-4 record against Michigan from his time at Minnesota. LBSU will add UCLA transfer Tyler Lamb to the mix after the first semester which could help this game’s RPI potential later in the season.