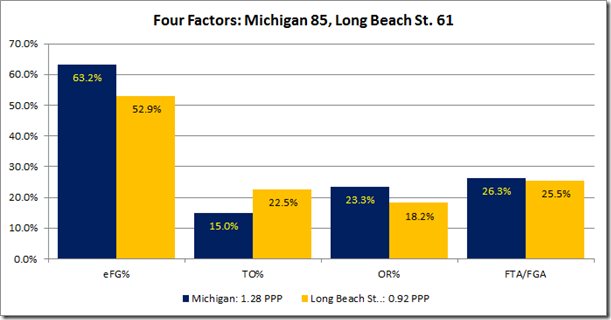 It took a tournament record 14 made three-point field goals but Michigan beat Long Beach State by 24 points to open the Puerto Rico Tip-Off in style. The Wolverines didn’t play flawless basketball but had too much talent and shooting ability for their mistakes to catch up to them.

Michigan jumped out to an 18 point lead in the first 11 minutes of play but allowed Long Beach State to hang around. The 49ers abandoned the various zone looks they utilized in the game’s opening 10 minutes and managed to cut the deficit to 13 at the half with their man-to-man defense. Six Wolverine turnovers in their first 20 possessions of the second half allowed Long Beach State to cut the lead to nine points with nine minutes remaining but the Wolverines had one more answer.

Michigan regrouped after a 30 second timeout followed by an additional stoppage for a clock error. Nik Stauskas buried a three and from that point on the Wolverines never looked back, outscoring the 49ers 24-9 over the final nine minutes to run away with an 85-61 victory.

Michigan’s offensive statistics resemble a classic Beilein-offense with lots of threes, few turnovers, efficient twos and not a whole lot else.

Over half of Michigan’s field goal attempts originated from three-point range (52.5%) and the Wolverines connected on 14-of-30 for 47%. The two-point shot attempts were good ones and Michigan made 61% of its attempts inside the arc for the game. The Wolverines didn’t turn the ball over but didn’t make much of an impact on the offensive glass or at the free throw line either. Michigan’s halfcourt offense, especially against LBSU’s man-to-man, never looked quite in sync but it’s tough to argue with the results – 1.27 points per trip. That recipe works against teams that don’t have Michigan’s talent but will have to improve as the season wears on.

Defensively, Michigan was far from perfect. The Wolverines held Long Beach State to .92 points per possession but looked average when they weren’t forcing the 49ers into turnovers. Long Beach State did turn it over on 22.5% of its possessions which led to 25 Michigan points. Late closeouts, especially from freshmen, cost Michigan in the first half as LBSU went 6-of-13 from three-point range. The 49ers hot shooting cooled in the second, 2-of-9 from long range, but the effective close outs will be high on Michigan’s list of necessary improvements. (To be fair, I did write in the preview that Michigan should let LBSU have the long range shot.) Long Beach State only rebounded 18.2% of its misses on the night and three of its six offensive rebounds were on missed free throws.

Long Beach State played well enough to force the Wolverines to play the game out but this was the sort of confidence building win that Michigan needed heading into a more difficult Friday game. Caris LeVert and Glenn Robinson III both had strong performances and the Wolverines shot the ball very well as a team. That being said, it was a step in the right direction and not a perfect performance. Whether Michigan plays Florida State (up 66-40 right now) or VCU they are going to play a team with significantly more athletic ability and talent.