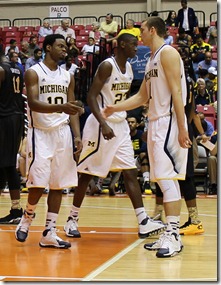 Michigan Coach John Beilein: “Long Beach State just wouldn’t go away. Dan (Monson) has been waiting for his guys to shoot the ball a little bit better and they shot it well in the first half. They hit six threes and were right there. Thank goodness we shot it even better than that.”

“You know at this time of the year, given the inexperience on both teams, there’s going to be runs. They made a great run, but then we picked up on the clock mistake and Nik (Stauskas) made a big, big shot. That’s probably one of our first big shots of the season, because it was going the other way quick. He made a huge one. That wasn’t part of a play; that was Nik doing what he does.”

“A couple of things we saw during their run – we thought our spacing was bad, it had crept back so we shrunk the court for them. We didn’t think we ran very well. And then our defense at times, it was just really bad. We just showed a lot of inexperience.”

“I wouldn’t say Nik (Stauskas) has taken over, but when we feel he’s got it going…in the last couple games he did a good job. We’ve got a set of plays we run through him, and what I like is he’s finding open people. I don’t think he forced a shot today.”

Michigan Guard Caris LeVert: “We did a great job the second half of really pulling away, they played well the whole game though. I think our defense really helped us get the win.”

“I think I rushed some shots against Iowa State. I watched a lot of film and got a lot better from that. We played a lot better today.”

“I think we’re getting better at closing out games, each game we get more experience.”

Michigan Guard Nik Stauskas: “You’ve got to give a lot of credit to Long Beach State. They gave us a really good game today, they were really competitive with us. Like Caris (LeVert) said, I think we did a really good job in the second half. That last 10 minute stretch we really just pulled away and took the game away.”

“Guys were just doing a really good job of getting into the lane and finding me when I was open. Caris (LeVert) and Glenn (Robinson III) had a couple of really good passes to me today. Anytime I can get open shots, I hope I can knock them down.”

“Trey (Burke) was National Player of the Year so, and Tim (Hardaway, Jr.) was a first round pick so it’s kind of tough to replace that. Me and Caris (LeVert) put in a lot of time this off-season working out. We’re just trying to do our best and we’re just happy we have this opportunity right now.”

Long Beach State Coach Dan Monson: “This is our third BCS game – Kansas State, Arizona and Michigan – we’ve just got to be able to take scouting reports and be able to disrupt somebody and not get people comfortable right out of the gate so easy. Part of it today was my fault, I tried to start in a triangle and two on Stauskas and LeVert and then Robinson III and Walton Jr. hit threes. Right out of the gate, they’ve got two guys who had been struggling a bit in a rhythm.
“We’ve been playing from behind so much in these games, you’ve got to hang in for your opportunities. We fought back and got it to seven I think in the first half and then once again in the second half, but then we made a lot of mistakes and beat ourselves. You can’t do that against a great team like this. They have so many weapons offensively and we just didn’t have an answer to slow them down on the offensive end of the floor.”
“These tournaments have always produced improvement for us, and that’s really important. You know, I’m not in Vegas, but I don’t think the odds of us winning this tournament were quite what they were a couple years ago when we were in there with some other teams. This is about us getting better for March.”
“We haven’t had a winning season in seven years, since I’ve been at Long Beach State, in the pre-season. We have had the No. 1 RPI January 1st the last three or four seasons, just playing tough teams. Every year the last three we’ve been able to win our league by getting better at this time. So it truly is a preseason for us right now. We’ve got to get better tomorrow and if we play even better than that on Sunday, then we’ll have an opportunity.”
Quotes via Tim Simmons, Puerto Rico Tip-Off Media Operations Coordinator