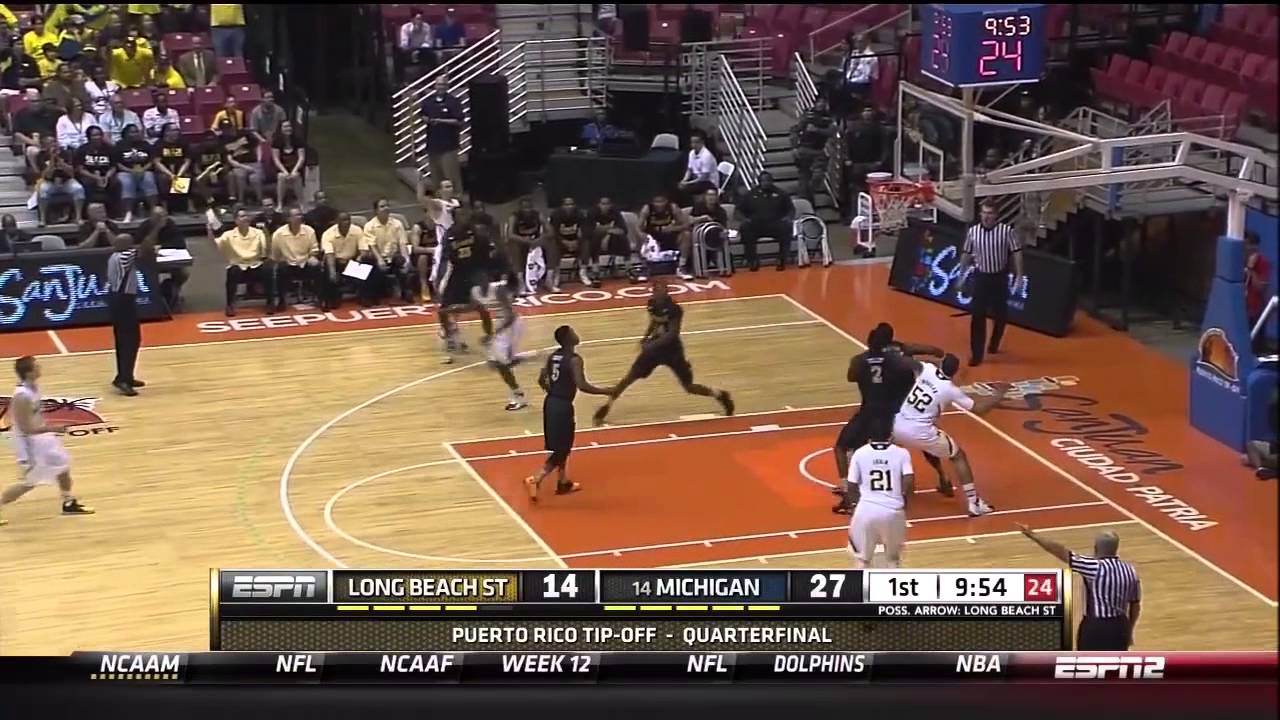 Michigan won its first game of the Puerto Rico tipoff against Long Beach State comfortably, 85-61. But one of the reasons the 49ers were able to stay within striking distance in the first half was their ability to knock down 3-pointers. Long Beach hit six of its 13 attempts from deep in the opening frame, and on a few of those long range shots it was Michigan’s so-so close outs that led to open makes. In this sequence, we have two freshmen — Zak Irvin and Derrick Walton — responsible for closing out on shooters. Lest you be misled, let’s be clear: these shots weren’t entirely the fault of Irvin and Walton. The player who makes two of them, point guard Mike Caffey, surely was not listed on the scouting report as a “shooter.” The guard is talented but last season he shot 33 percent from deep, and this season he’s shooting at a 27 percent clip. On the first play, Irvin actually does a decent job closing out, but just leaves too much space between him and Caffey, and Caffey nails a deep three from about the free-throw line extended. On the second play, we see Walton still learning on defense — the freshman slides over and turns his back on Caffey to help Caris LeVert on the potential drive by A.J. Spencer, but Spencer gets the ball right back to Caffey and Walton simply doesn’t respect the jumpshot, leaving Caffey with plenty of space to launch. Once again — these were good shots by a player who doesn’t usually hit them, and those two in particular were close to NBA range. On the third play, Walton just doesn’t work hard enough to get around a half-hearted screen and leaves the freshman Branford Jones open for a long three. After that shot, Long Beach State was within eight points and Michigan was in a game.

Nik Stauskas had himself a game on Thursday. Every time it looked as thought Long Beach State would make it competitive, the reliable Canadian would slam the door shut with another big play. In the first half, those big plays came in the form of 3-pointers. The 49ers were playing a similar matchup zone to South Carolina State, which meant Michigan’s strategy was to get the ball in the middle of the court — and that’s precisely what the Wolverines did. Caris LeVert and Glenn Robinson III both deserve credit for their assists on these shots. On the first make in the sequence, LeVert does an excellent job of getting into the paint with the dribble-drive, drawing defenders into the paint and immediately looking for open shooters. For the second play, Stauskas and LeVert execute a two-man game with Stauskas dumping the ball in to LeVert at the free throw line and LeVert kicking it back out as soon as the defense collapses, leaving Stauskas wide open for a three. The final three, Robinson drives baseline and finds Stauskas open in the corner. Stauskas was awesome all night, and when he wasn’t creating shots for others his teammates were creating shots for him.

3) Mitch McGary displays nice touch in the second half

Michigan’s All-American big man came off the bench and played 14 minutes in this game. This is less than the 22 minutes he played against Iowa State, which is understandable given the difference in competition and the coaching staff’s decision to bring him along slowly this year. However, McGary was severely underutilized while he was in the game. He took only three shots and made all of them, along with grabbing four rebounds, one (very pretty) assist, one block and a steal. In these two clips, we see both what McGary is capable of and what we’ve seen him do before. In the first play, McGary makes a simple turnaround jumper. If he can consistently knock down this shot, it will open up all sorts of opportunities in the post for him in one-on-one situations. Earlier in the game, McGary displayed a brilliant baseline drop step maneuver to go with a floater — that combined with a turnaround make for solid building blocks in a developing post game if they can be taken advantage of consistently. The second play in this sequence is a vintage McGary highlight: ridiculous body control and athleticism, combined with near-perfect anticipation and a high motor. The tip-in off the miss by Glenn Robinson III was a play not many other big men in the country could make — while an improved one-on-one post game for McGary would be great, it’s plays like these that separate him from the pack.

Long Beach State, for the majority of this game, simply would not go away. In the second half, after Michigan got out to 16-point lead, the 49ers closed the gap quickly with a that brought them within nine midway through the second half. The first play of this run is particularly interesting. Track Jordan Morgan throughout this play. Morgan begins the play guarding the 6-foot-9 Dan Jennings. When Jennings sets a ball screen on Nik Stauskas for Mike Caffey, Morgan hedges hard, as usual. What usually happens in this situation, as Jennings descends into the post, is another Michigan player briefly shadows Morgan’s man until he can recover. Unfortunately for Michigan, that responsibility falls to Spike Albrecht in this particular case. Long Beach clearly has planned for this, as Branford Jones, Albrecht’s matchup, effectively screens Morgan and keeps him from getting back to Jennings. This leaves Albrecht alone on Jennings when Jennings gets the ball on the block, a worst-case scenario for Michigan. Morgan finally gets past Jones to help Albrecht, but by that time Jennings has anticipated the double-team and passed the ball out to Jones. Morgan is unable to close out in time, and Jones hits the three. A lot had to go right for the 49ers on that play, and it did — I did love the box-out by Albrecht on the shot, as he had perfect position on Jennings (ha). Later, David Samuels frankly camps out illegally in the post against Stauskas and scores. This is followed by a fast break basket, and Michigan is ahead by only nine.

5) Caris LeVert takes over late in the game

Nik Stauskas was Michigan’s leading scorer, but Caris LeVert was the one who put this game away. Of the 18 points Michigan scored between the 7:45 mark and 2:28, LeVert was responsible for all but three of them. The lanky sophomore started things off with a great pass to Glenn Robinson III under the basket on a delayed fast break after LeVert saw Robinson’s defender stumble. Then, LeVert took a ball screen by Mitch McGary and scored after knifing through two defenders for an up-and-under lay-in at the rim. The next play is also made off a ball-screen by McGary, but it’s essentially a one-on-one play after McGary’s defender recovers. LeVert makes a nice move and crosses over before hitting a tough leaner in the lane. Just a really impressive play late in the shot clock. On the ensuing two plays, LeVert was the beneficiary of great passes from his teammates: first on the drive-and-kick by Derrick Walton, then by Stauskas. LeVert hit both 3-pointers to finally put the game out of reach. It’s looking more and more like the LeVert Michigan fans saw in the games preceding Iowa State is the one they can expect, which is very good news. LeVert finished with a ridiculous stat line: 20 points on 8-of-13 shooting, five rebounds, four assists and zero turnovers.