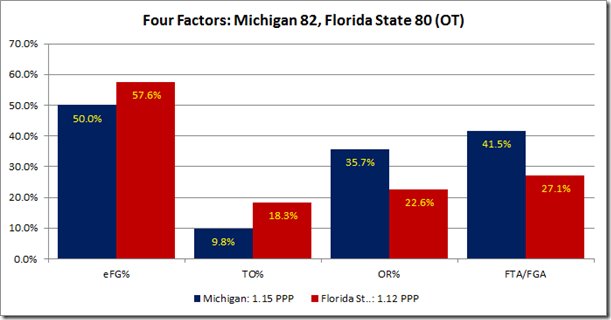 It wasn’t always pretty but Michigan grew up on Friday night.

The Wolverines were beaten up by a bigger, faster and stronger Florida State team for about 25 minutes and no one stepped up. Nik Stauskas fired errant pull-up jump shots, Glenn Robinson III sat expressionless in the corner of the floor, and Mitch McGary played his tail off but couldn’t do it alone.

There was no leadership or backbone as Florida State got whatever shot it wanted on offense. The Seminoles extended their lead to 16 points with 17:18 to play in the second half and had their sights set on back-to-back wins against top-15 foes.

Finally, the Wolverines had enough. Michigan’s stars realized that this was their team and they had to own it. Stauskas tallied 25 points while playing 44 minutes, carrying the Wolverines down the stretch. McGary posted his first double-double of the season with 14 points and 12 rebounds and Robinson awoke burying a handful of huge shots down the stretch.

There were still mistakes along the way and John Beilein had to reach deep into his bag of tricks to pull out the 1-3-1 zone but the Wolverines finally looked like a team on the same page. Michigan grew up and pulled out a game that it probably had no business winning.

Florida State’s length was as advertised inside and Michigan shot just 46% on twos but made some threes, 37.5%, and got to the free throw line. Converting the freebies was a different story, Michigan was just 17-of-27 at the stripe. The free throw shooting almost cost the Wolverines down to the final horn when Florida State had a desperation heave at the win. The one thing that Michigan didn’t do was turn the ball over against FSU’s pressure defense, giving the ball away on less than 10% of its offensive possessions.

Michigan dominated the glass on both ends of the floor against one of the tallest teams in the country. The Wolverines rebounded 36% of their misses (15 offensive rebounds) for 14 second chance points. Florida State managed to rebound just 23% of its misses for a meager six second chance points. McGary had seven offensive rebounds but four other players had at least one offensive rebound. Leonard Hamilton admitted after the game that he couldn’t play as many big men as he wanted because Michigan was able to play four guards and still control the glass.

The 1-3-1 zone is tailor made for a turnover prone team that can’t really shoot the three and it saved Michigan’s defense at the last possible moment. Michigan’s man-to-man defense had been abused all day and the 1-3-1 was a bail out. It’s worth noting that Michigan was only able to run its 1-3-1 so often down the stretch because its offense was nearly perfect – providing time to setup the defense. The Wolverines struggled to defend Florida State in transition or off the bounce and couldn’t force many turnovers with their man-to-man defense.

A loss to Florida State would have been crippling to Michigan with games against Duke, Arizona and Stanford still on the schedule.  The win means a game against Charlotte for the Puerto Rico Tip-Off Championship, one of four championships that the Wolverines set their sights on in the preseason.