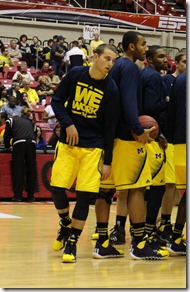 Michigan Coach John Beilein: “For a November game, we’ve had a couple of these now this and the Iowa State game, it seemed like it was a playoff feel to it. Florida State – I’ve coached a lot of years, haven’t seen a team this efficient with that type of length with their guards, they’ve got a nice compliment between their guards and big guys. When you finish over Mitch McGary with ease when he’s bodying you up, that’s a talented, talented big guy. And several of them did it, so we were very fortunate to get that win and go on to the Championship game.”

“We made our own grave there. We came out all fired up and we didn’t get a couple breaks at the other end, a couple of loose balls and then we came down and really didn’t execute on offense. All the sudden you look and it’s 16 points. Jeff Meyer said in the huddle, ‘We’re not going to score 14 points in this one possession. It’s got to be two-by-two.’ We just worked at it and changed up some things we were doing and obviously we slowly crept into the game.”

“We were just trying to get Nik (Stauskas) the ball and make sure he had some space. Mitch (McGary) was going to give him a screen and play ball. There’s not enough time with 11 seconds to go, knowing how they were shutting down some things, we just tried to keep it real simple.”

“Today, there were several times that I was comfortable with both Nik (Stauskas), but then Glenn Robinson came up big for us, made some big shots…and Mitch (McGary) just gave us so much energy.”

“You know what was really fortunate is that Derrick Walton is the only one that hadn’t played in it that much before, but he was a warrior in it. I mean absolute warrior in it. That’s something you’ve got to have at the bottom of that. They scored a couple layups, but we didn’t want to give up any threes. It’s a difficult zone in that situation. With one day prep, I’m sure that Leonard (Hamilton), I mean what are you going to do with that? So that really helped us.”

Michigan Forward Mitch McGary: “I want to credit Florida State on their play. Tonight was a battle and I think we stuck together and showed our core values tonight.”

“We just didn’t want to go home with another loss on our chests. We came together as a team and before the game, the coaches made a great point for us to stay together. We fought through that adversity the whole time and possession after possession we got stops and it paid off in the end.”

“Going into halftime we were down 10, we still had a positive attitude towards the game. We knew we needed to get stops each possession, there’s not a 10-point basket where we can get right back in the game, we just had to grind it out each possession and that’s what we did.”

“I’m getting there, it’s a process, I can’t get back into shape overnight. I didn’t play as much last night, kind of saving me for tonight and it worked out. I felt good out there.”

“Going up against a team with such size and length –they’ve got 7’3 and 7’1 – I’ve never played against a team with two seven-footers, which is difficult. I think we did a good job, Glenn (Robinson III) and I, both on the glass with both (Jon) Horford and Jordan (Morgan). I kind of just boxed them out and had the guards clean-up for me, so it was a team effort.”

Michigan Guard Nik Stauskas: “Florida State played a great game. Especially in that first half, they were beating us pretty bad. I think it just says a lot about this team, how much we’re able to stick together, the fact that we were able to overcome that deficit and win in overtime.”

“Me and Mitch (McGary) were just going to run a screen-and-roll, I looked and the whole baseline was open so I kind of just rejected the screen. The middle was wide open, I got an open layup.”

“I think I got a couple good looks in the first half, they just didn’t go down. The second half I just got into a rhythm a little bit more, started being more aggressive and getting to the basket. Anytime you can get to the free throw line a lot it’s a good way to get easy points on the board and get your confidence up so that’s what my deal was in the second half.”

Michigan Guard Derrick Walton Jr.: “We’ve been working on the one-three-one, we just thought it would work at that time. We went with it, trusted it, and it worked for us.”

“My teammates help me a lot; we stay together, they encourage me to be myself and be a leader of this team. I’m embracing the role and they’re helping a lot.”