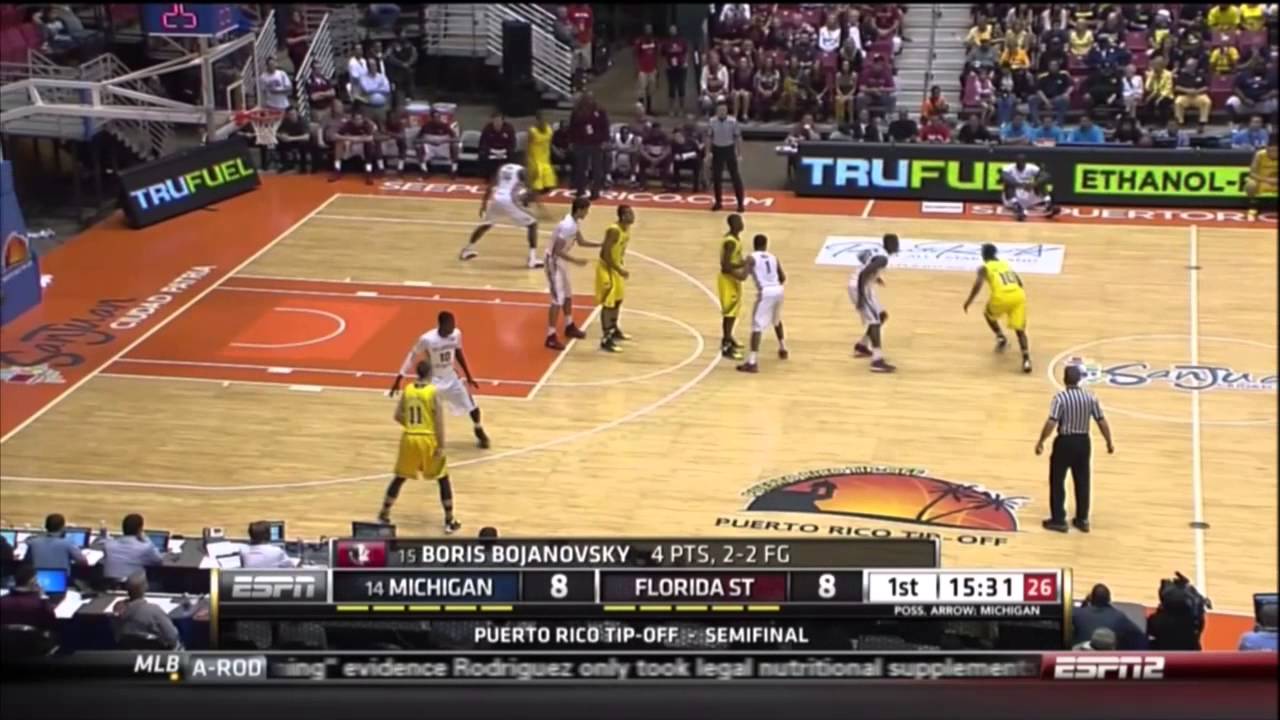 For a brief moment at the beginning of Michigan’s 82-80 victory over Florida State in the semifinal of the Puerto Rico Tip-Off, it looked as though the Wolverines were on their way to another ridiculous shooting night. Against Long Beach State the day before, Michigan shot almost 47 percent from the 3-point line, and its hot shooting was a big reason Michigan was able to run away with the game. On Friday, after Florida State jumped out to a 6-2 lead, Michigan answered by hitting 3-pointers on its next three consecutive possessions. Of note: two of those shots from beyond the arc were fast-break buckets, and three different Wolverines each made one. The first point is interesting because the line going into the game was that Michigan had to slow the game down and not let Florida State get out and run. However, Michigan saw some opportunities coming off Florida State misses, and the fast break is one of the best situations to find yourself with an open 3-pointer, as the Wolverines did in these first two plays. The final three of this sequence came as a result of penetration by Caris LeVert, who may be the best on the team at dribble penetration. He kicks it out to Derrick Walton after drawing the defense, and just like that Michigan has the lead.

At the start of the second half, things weren’t looking good for Michigan. After going into halftime down 10, the first few minutes after the break would be critical — and nothing about Michigan’s play during those first few minutes inspired confidence. After a couple of missed 3-pointers by Nik Stauskas and Derrick Walton getting blocked easily on a midrange jumpshot, Michigan was searching for answers. John Beilein called a timeout and ran a play for Mitch McGary, who missed an awkward leaner, but Stauskas cleaned up the miss with a tip-in. Our sequence begins after that shot, when Michigan came out after the official timeout. Beilein, as he is wont to do, came up with a perfect inbounds play to get McGary open: Stauskas screens Glenn Robinson III’s defender; Robinson cuts hard down the lane, forcing sophomore Michael Ojo to slide under the basket to help; this leaves McGary wide open for a midrange bank shot, which he hits easily. Great play coming out of a timeout. The next three plays indicate what the coaching staff was surely preaching to the Wolverines during halftime and in the huddle during that media timeout: attack the basket. Robinson, after gathering a Florida State turnover, doesn’t hesitate to get down the court and hit a teardrop over Ojo. Later, McGary drives right into Ojo and draws the foul. Finally, Stauskas really gets things going when he rejects a screen from Jon Horford, drives and slams home a nasty two-handed dunk in traffic. After that bucket,the Wolverines had cut the deficit back down to 10 points, but more importantly, it felt as though Michigan’s whole attitude shifted.

All the national media types who have been touting John Beilein’s 1-3-1 zone for about six years too long have finally been vindicated. Michigan’s use of Beilein’s “trademark” defense drastically turned the game and was arguably the reason Michigan was able to pull out a victory on Friday. With a little under four minutes left in the game, Michigan’s offense was clicking but its defense just couldn’t get stops — it felt like the Wolverines were right on the edge of making a run for the lead if they could just stop FSU on a few consecutive possessions, but Michigan’s man-to-man just wasn’t effective. Beilein called for the 1-3-1, and everything changed. Designed to disguise and distort passing lanes, Michigan’s zone successfully confused Florida State’s guard and made them extremely tentative on the perimeter. Caris LeVert proved to be the perfect player to work the top, using his length and quickness to disrupt the ball and completely throw off any rhythm the Seminoles hoped to establish. On the first play, Devon Bookert inexplicably takes the ball straight into the corner and dribbles it off his foot. A few plays later, the double-team on the wing by Stauskas and Derrick Walton forces Aaron Thomas to step out of bounds on the sideline, with Robinson hitting a 3-pointer on the ensuing possession. One of the best plays of the night occurred in the last play of this sequence, when LeVert poked the ball away from Okaro White when White attempted to drive the middle. Perhaps the most impressive aspect of Michigan’s implementation of the zone? Walton, a freshman, playing at the bottom of it and running it with aplomb. Beilein on Walton in the zone: “What was really fortunate was that Derrick Walton was the only one who hadn’t played it that much before. We practice it obviously. But he was a warrior in it. I mean, an absolute warrior in it, and that’s something you gotta have at the bottom of that.”

Once again, Nik Stauskas is the man with the ball in his hands as the clock is winding down. Everyone watching this game knew the final play would come down to Mitch McGary and Stauskas, Michigan’s two most effective scorers all night. There’s nothing complicated about this play: McGary sets a screen for Stauskas, Stauskas rejects it and goes the other way after he gets an early step on his defender. Florida State doesn’t have Ojo in the game to challenge at the rim, and the Seminoles are clearly worried about a 3-pointer and fouling. Stauskas wisely takes the ball directly to the rim and makes the easy layup. This play speaks to Beilein’s confidence in Stauskas as well as the sophomore’s awareness and decision-making. With every game, Stauskas seems to establish himself more and more as Michigan’s go-to player in the clutch. In this game, he proved why. Stauskas on the play: “Me and Mitch were just going to run a screen-and-roll pretty much. I looked and the whole baseline was open, so I kind of just rejected the screen and it was wide open. I got the open layup.”

Early on, Glenn Robinson III may not be having the sort of season Michigan fans expected him to have, but on Friday night he came up big when Michigan needed him most. We threw Robinson’s 3-pointer near the end of regulation in there again just for fun. That was a huge play to bring Michigan within four points near the end of the game, but it was in overtime when Robinson really shone. He kicked things off with a really impressive crossover and stepback two, and he supplemented it with some jawing as he ran back down the court, as Dan Dakich noted on the broadcast. This could be some of that fire Michigan fans have wanted to see from Robinson this season. On the next play, Robinson and Stauskas run the exact same action as they did on the 3-pointer near the end of regulation. This time, Robinson pump fakes and takes a couple dribbles in before rising and firing a contested long two. Michigan needed every basket it could get in the overtime period, and Robinson came up with a couple of huge makes.

Glenn Robinson III had some nice baskets in overtime, but Nik Stauskas was running the show. The sophomore put Michigan on his shoulders and simply willed himself to seven overtime points. On the first play, Mitch McGary sets an excellent screen for Stauskas, who makes the 3-pointer. From that point on, it was Stauskas forcing his way to the rim, drawing contact and going to the free throw line. For much of the latter portion of the game, Michigan was essentially running a dribble handoff action on the perimeter, with players setting de facto screens for each other through that movement and McGary providing secondary screens in an effort to free ballhandlers of their defenders and open up driving lanes. Stauskas took full advantage of this action and oozed confidence as he went hard to the basket again and again. Michigan got at least one point on six of its first seven possessions of overtime, and Stauskas was the main reason for that. Stauskas didn’t just look like Michigan’s go-to player at the end of this game; he looked like a budding superstar.