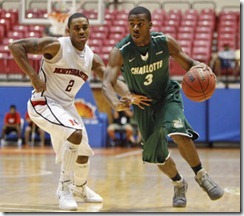 Michigan and Charlotte will battle for the Puerto Rico Tip-Off Championship this evening in a match-up that no one saw coming.

Statistics and projections gave the 49ers just a 6.2% chance of reaching the tournament championship but Charlotte cruised by Kansas State and Northeastern to earn a shot at Michigan. The Wolverines missed out on the much-hyped VCU rematch but were up against all they could handle versus Florida State, coming back to beat the Seminoles in overtime after trailing by as many as 16 points in the second half.

The 49ers are ranked 113th in adjusted offensive efficiency and 108th in adjusted defensive efficiency by KenPom. Charlotte, like a number of teams that Michigan has faced early on this season, wants to play fast and averages nearly 76 possessions per game (15th in Division I). The Wolverines average just 66 possessions per game making them the 303rd fastest team in the country.

The 49ers are 4-1 on the season but their resume lacks any true quality wins. Victories over Kansas State, Northeastern and Elon are nice but Charlotte also lost at College of Charleston earlier in November.

There aren’t many glaring weaknesses on Charlotte’s offensive profile but there aren’t many major strengths either. Despite their uptempo style of play, the 49ers are a rugged physical team that prefers to play around the basket. Charlotte is a good rebounding team on both backboards and routinely wins the free throw battle. The 49ers attempt 57 free throws per 100 field goal attempts while their opponents manage just 31 FTAs per 100 FGAs.

Charlotte shoots just 33% on threes and attempts only 24% of its shots from behind the arc. In the half-court offense, the 49ers run a lot of ball screen sets. They aren’t scared to isolate their big man on a switch and will also look for their guards to penetrate.

Defensively, the 49ers are strong on the glass, rebounding 72% of their opponents’ misses but have just an average field goal defense. Charlotte opponents are shooting 48.5% on twos, 33.9% on threes for a 49.4% effective field goal percentage. The 49ers weren’t scared to experiment with a couple of zone looks against Northeastern, opting to utilize a 2-3 or 3-2 match-up zone.

Shawn Lester leads the 49ers in scoring at 16 points per game but comes off the bench. At 6-foot-4, Lester is efficient (68% on twos, 37% on threes), gets to the free throw line (51% FTA/FGA), and is strong defensive rebounder. Despite his ability to attack, over half of Lester’s field goal attempts are three-pointers this season.

6-foot-4 guard Pierria Henry leads the 49ers in minutes and assist rate and is a free throw magnet, shooting 90 free throw attempts per 100 field goal attempts. He’s a below average shooter at 48% inside and 10% outside the arc.

Big men Willie Clayton, 6-foot-9, 237lbs, and Mike Thorne, 6-foot-11, 257 lbs, are perhaps their most effective players. Both players start for the 49ers and play major minutes. Clayton is effective at the rim (76%) but will sometimes opt for 2-point jump shots. Let him have those shots as he shoots just 18% away from the rim. Thorne is a bit more effective away from the rim, shooting 40% on two-point jumpers, and appears to be a viable pick-and-pop threat.

Terrence Williams rounds out the starting lineup and is a turnover prone, inefficient guard that excels at getting to the free throw line but is shooting just 27% on twos and 33% on threes.

Ben Cherry is a 5th-year transfer from Tulane. The 6-foot-3 guard attempts 78% of his field goals from long range but was just 1-of-11 heading into Friday’s game against Northeastern. But he knocked down 6-of-7 triples against Northeastern, all in the first half, and seemed to have regained his shooting touch.

The 49ers will test Michigan’s ball screen defense, especially with their ability to dump the ball into the post. With two big men that are both capable of playing with their back to the basket, Michigan’s small lineup will be tested for the second straight game. If Robinson is scoring the ball and the Wolverines control the glass, Charlotte might have to abandon the two-big look. If not, Michigan could have some problems.

Charlotte is probably the best rebounding team that Michigan has faced this season and will test the Wolverines on the boards. Michigan dominated the boards against Florida State but will need Mitch McGary to have another big rebounding performance to keep things in check against an aggressive 49er team.

On paper, this is a game that Michigan should win comfortably – especially with a championship on the line. Ken Pomeroy’s projections like Michigan, 80-70, giving the Wolverines an 82% chance of going home with the Puerto Rico Tip-Off Crown.

This & That: Michigan and Charlotte have played just once before, in the 1977 NCAA Tournament when Charlotte beat Michigan for a trip to the Final Four and Chad Kinch dunked on Phil Hubbard. Michigan has beaten just one team this season that has recorded a win over a Division I foe.