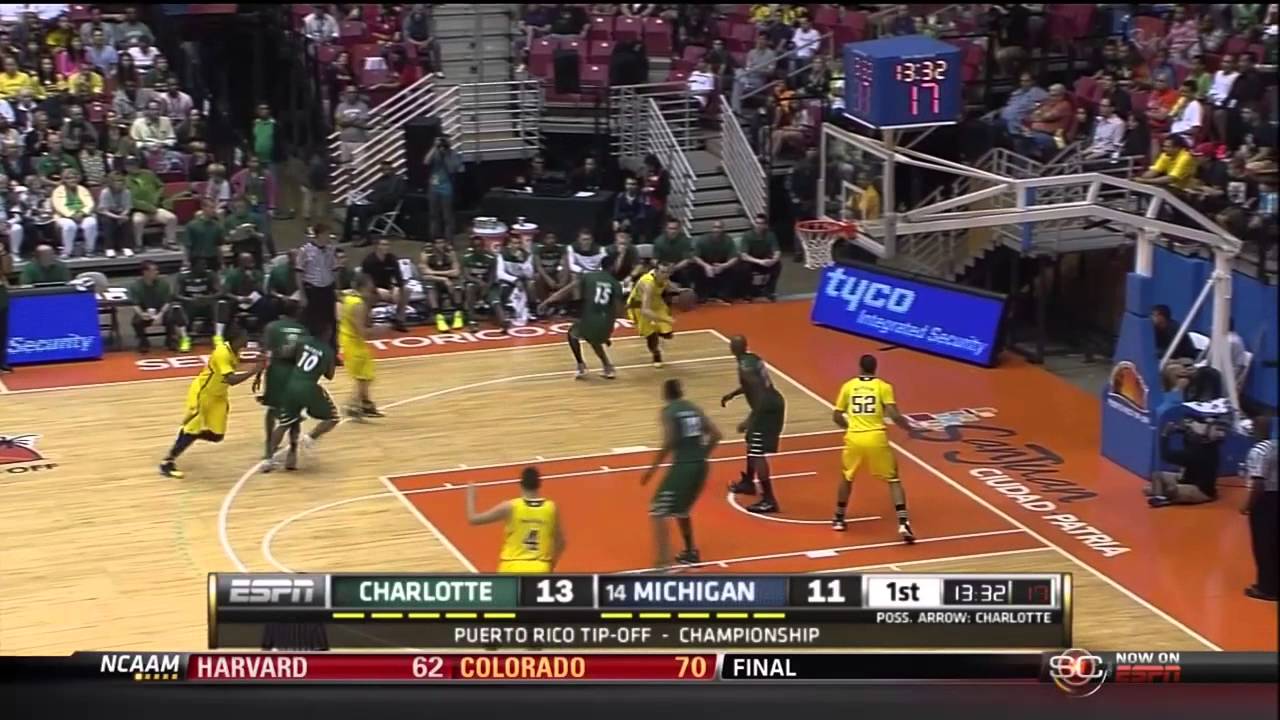 1) Nik Stauskas hits an acrobatic reverse in the first half

In a particularly ugly 63-61 loss to Charlotte, Michigan’s first half stood out as the uglier of the two. Simply put, The Wolverines couldn’t buy a bucket. Michigan shot just over 23 percent from the field, and the only reason its percentage wasn’t in the teens was because of Nik Stauskas. The sophomore was the only Wolverine who found success in the opening frame, hitting five of his 10 shot attempts for 16 points. Take out his production, and Michigan made only three of its 24 attempts from the field. One shot by Stauskas stood out in particular: this acrobatic reverse lay-in on the baseline. Michigan actually displayed some good ball rotation and patience on this play, as the offense is run through a couple times before Stauskas finds his shot. We can see after Stauskas’ initial drive to the hoop, Zak Irvin and Spike Albrecht each make crisp passes that leave Charlotte defenders on their heels as they close out, which gives Stauskas the opportunity to drive and challenge at the rim. This was an excellent shot, but its result was unfortunately rare for the Wolverines in this game. They went into halftime down five, which was a pleasant surprise given how poorly they shot the ball.

Similar to its game against Florida State, Michigan took a little while to implement its second-half adjustments against Charlotte. The Wolverines didn’t look good to start the second half and allowed the 49ers to jump out to a 12-point lead. In the first three and a half minutes of the second frame, Michigan had two turnovers and three missed jumpshots on the offensive end and zero points. Then, Michigan went on its first true run of the game thanks to some impressive plays by Nik Stauskas and the extremely well-rested Caris LeVert. LeVert is probably Michigan’s best shot-creator for his teammates when he drives to the hoop, and he showed why on two of these plays. The first play of this sequence is pretty remarkable: LeVert uses a screen by McGary in the corner and Charlotte essentially double-teams him, leaving Mike Thorn Jr. in a tough position in the post having to guard both Jordan Morgan and Mitch McGary. LeVert’s defenders give him a little room and he takes advantage, driving to the basket and forcing Thorn to make a decision. Thorn — wisely, actually — slides over to McGary, and the second LeVert sees this he throws a dart to Morgan, who does a nice job handling a tough pass and making a contested hook. On the next play, Stauskas just makes a Burke-esque hesitation move and drives the lane for a one-handed slam. Later, McGary makes a great pass to LeVert curling around Jon Horford, and LeVert up-fakes, drawing the and-1 with a tough reverse finish. On Horford’s layup, LeVert once again creates the opportunity, crossing over his defender and drawing Horford’s with a drive to the basket. Finally, LeVert’s man is a little late closing out at the 3-point line and the sophomore hits a three that brings Michigan to within one point of Charlotte, 42-41.

In the first half, it was Nik Stauskas making the plays necessary to keep Michigan in the game, when no one else could hit the broad side of a barn. In the second half, with Stauskas sustaining an ankle injury that rendered him mostly ineffective, that task fell to Caris LeVert. The sophomore tallied 11 points in the latter frame, and while the box score only credits him with one assist, he had at least two in my eyes in the plays in the previous clip to Jordan Morgan and Jon Horford. LeVert did all he could to put Michigan in a position to win this game. After getting the benefit of a touch foul call on the perimeter, LeVert hits two free throws that give Michigan its first lead since early in the first half. Later, LeVert makes an excellent play on a ball screen from Morgan, getting by his defender and using his body to seal the defender off before making a nice jump-stop move to the basket. The next play exhibits LeVert making another one-on-one move on his defender — right now, it appears Stauskas, LeVert and maybe Derrick Walton are the only Wolverines comfortable going one-on-one against defenders, and while Stauskas is the most consistent, LeVert has better vision. He shows it off on the very next possession when McGary slips behind his defender after setting a ball screen and LeVert gets him the ball high, enabling McGary to finish at the rim. Unfortunately for Michigan, amidst these good offensive plays from LeVert were failed assignments and poor on-ball defense on the other end. With a few stops, the Wolverines could have found themselves in the lead; instead, after the final play of this sequence, they were still down three with about a minute left.

4) Jordan Morgan forces a tie-up in the waning seconds

This was just a huge play by Jordan Morgan. Michigan was down two with 14 seconds left and Spike Albrecht  shooting his second free throw. John Beilein made his team aware of the situation should Michigan force a jump ball — the Wolverines had the possession arrow. Beilein said Spike Albrecht missing his second free throw was not intentional, and once it caromed off the rim, Morgan didn’t really have a realistic shot at getting the rebound. However, aware that all he needed to do was cause a tie-up, Morgan got a hand on the ball and forced it to the ground, where he pounced on it and retained possession for Michigan. Morgan didn’t have a terrific game — he only made one of his five field goal attempts — but he had perhaps his best game of the season, corralling nine rebounds (five offensive) and hitting two huge free throws with three and a half minutes left. Minutes have been hard to come by for the redshirt senior, but he did all he could to get Michigan in a favorable position at the end of this one. Beilein on Morgan’s performance: “Jordan Morgan just went in there and played his tail off. He had five offensive rebounds, he worked so hard. He got a big bucket for us and made two huge foul shots. I’m really happy for him, because finding playing time with Mitch in there is tough.” On the inbounds play, McGary is wide open because both his defender and Stauskas’ defender stay on Stauskas in the corner after McGary sets a screen for him. This play tied the game with nine seconds left, which unfortunately left too much time on the clock for Charlotte.

5) Charlotte wins the game on a last-second putback

There’s no getting around it: This was a really poor defensive possession for Michigan. The Wolverines hadn’t played well on the defensive end throughout the second half — it was far too easy for the 49ers to get into the lane and they seemingly drove the ball at will on Michigan’s perimeter defenders. This isn’t taking anything away from Charlotte — Pierria Henry made a good read to shed Caris LeVert and then he got the ball to Terrence Williams, who put back his own missed layup for the win. There are a few things Michigan could have done differently on this play, and all observations have the benefit of hindsight as well as watching and re-watching the clip over and over again. LeVert cheated on the ball screen, which was disastrous. It completely took him out of the play defensively and gave Mitch McGary no choice but to step up and stop the ball. Earlier on, McGary and Zak Irvin switched assignments on a pseudo-screen, and it may have been wiser for Irvin to stick his man given the way the play was heading (that’s expecting a lot, though, and may be unfair). I don’t necessarily blame McGary for going for the block on the initial layup — it’s a layup, so as a defender you have to think if he gets it off it’s going in. While it left McGary out of position for the rebound, I still think it was the play he had to make. Ultimately, this game hurts, but there were plenty of factors that went into this loss entirely outside of Michigan’s control, including injuries to two of its key players and being completely unable to hit open shots.