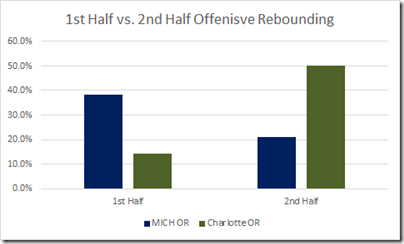 Everything went wrong from the opening tip off for Michigan in the Puerto Rico Tip-Off Classic Championship. The Wolverines had a horrific shooting performance, struggled on defense and were forced to play without Glenn Robinson III (back injury) and with a limited Nik Stauskas (ankle injury).

After starting out on the wrong foot, things never quite got better for Michigan. The Wolverines made some plays down the stretch but Charlotte always had the answer. Whether it was a defensive breakdown, blown box out or bricked three-pointer, Michigan could just never string together enough plays or stops to go home from Puerto Rico undefeated.

Seconds after a beautifully executed baseline out of bounds play led to a wide open layup for Mitch McGary, the 49ers drove the length of the floor for a layup attempt and followed it up for the game winning tip in off the glass. Charlotte was the tougher team and the team that made one more play down the stretch.

It was Michigan’s worst shooting performance since March 10th, 2012 in a 22 point loss at Ohio State. The Wolverines mustered just .86 points per possession and shot 37% on twos and 22% on threes. Although the dreadful three-point shooting made it seem as if Michigan’s offense was decidedly perimeter oriented, the Wolverines attempted just 37% of their shots from outside the arc, had a free throw rate of 39% and rebounded just short of a third of their misses. Michigan’s threes were pretty good shots, they just didn’t go in.

At 71 possessions, the game might have been a little too fast for the Wolverines. Michigan might need to take a step back and slow things down to find some offensive chemistry. Charlotte is a team that wants to play fast, it’s tough to say what Michigan is or isn’t at this point – and that’s part of the problem.

There are reasons for the poor rebounding. The Wolverines were forced to play for long stretches with Zak Irvin as the primary four man, for one. However, one of the biggest pitfalls of the Wolverine defense was the inability to stop dribble penetration on the high ball screen. Charlotte consistently got into the middle of the paint and Michigan’s help defense would slide in too late. The help would take the big man away from the basket and leaving the backside wide open. Willie Clayton grabbed eight offensive rebounds in the second half and Michigan had no answer.

Michigan went to the two-big lineup quite a bit out of necessity – both because of Robinson’s injury and the fact that Charlotte dominated the offensive glass in the second half.  The Wolverine defense was solid with two bigs but the offense suffered as a result. Players that played the four or five spots on the night were a combined 7-of-48. Irvin’s struggles were obvious, McGary played an inefficient offensive game, Morgan struggled and Robinson was hurt. Michigan is going to need production from the frontcourt and just didn’t get it today.

Overall, Michigan’s defensive performance wasn’t that bad. The Wolverines only gave up .89 points per possession and defended first-chance field goals pretty well. (Charlotte shot 38% on twos but 46% on a few timely threes. ) This game was lost because Michigan couldn’t score. And that hasn’t been a problem for Michigan for a long time. Is the offense doomed? Not at all. There are pieces there but they just aren’t on the same page quite yet.

There’s no sugar coating this loss for Michigan. Two November losses with Arizona, Duke and Stanford still on the schedule is dangerous. This is a young team that will get better, but these early losses still count. Michigan has a lot to fix and while there’s still time to make fixes, the clock is ticking.