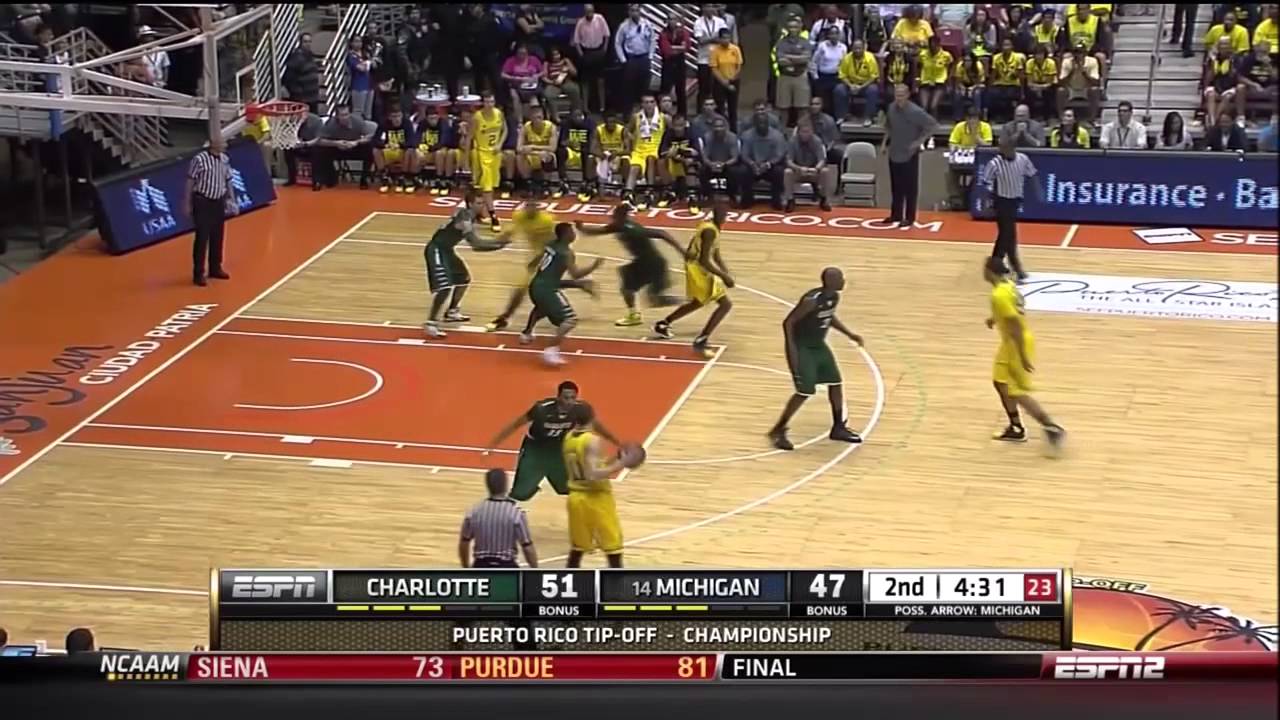 Michigan’s run in the Puerto Rico Tip-Off may have ended in frustrating loss — a last-second tip-in by Charlotte for the championship — but it provided the young Wolverines with an opportunity to learn about themselves. And if we know one thing about John Beilein, it’s that the coaching staff will encourage the players to “embrace” the loss in the championship game and “grow” from it. Here are five lessons we learned from Michigan’s play in Puerto Rico. (Photo Sanjiv Gupta)

1) As Nik Stauskas goes, so goes the team…for now

This first point is unfortunate because Stauskas appeared to twist his ankle badly during Michigan’s final game of the tournament. The injury severely limited his productivity in the second half of the championship game, but more pressing is how it will affect his productivity going forward. Luckily, Michigan is off until Friday, when the Wolverines play Coppin State at the Crisler Center. This should give the sophomore some time to heal up, but it’s impossible to know if there will be lingering effects.

Michigan fervently hopes that there aren’t, because Stauskas was the straw that stirred the drink for the Wolverines throughout the Tip-Off. He won tournament MVP honors, averaging just over 23 points, four rebounds and two steals per game. And right now, he’s the only Wolverine who has shown the ability to create with consistency. When Stauskas got hurt in the second half against Charlotte, Michigan’s offense struggled mightily until Caris LeVert took the reins late. As this team improves and players find their roles in the offense, the team won’t have to rely on Stauskas so much — but that day isn’t here yet.

2) The defense needs work, but the offense has some issues as well

Let me explain. Dylan illuminated an interesting statistic in his recap of Michigan’s loss at Iowa State earlier this season: over the past two seasons, Michigan is 45-3 when holding opposing teams below 1.05 points per possession. Last year, the offense was good enough to compensate for those decent-but-not-great defensive performances. This year, the offense just isn’t there right now. The Wolverines are actually ranked 33rd nationally in Ken Pomeroy’s adjusted offensive efficiency and 28th in adjusted defensive efficiency.

Michigan’s defensive showing against Charlotte should have been enough for it to win the game, but that doesn’t mean there weren’t noticeable holes over the weekend. Specifically, Michigan’s perimeter defense got worked, with both Florida State and Charlotte finding open lanes to the basket consistently. Particularly troubling was Michigan’s late-game defense against Charlotte: from 5:16 to 0:37, Charlotte scored on every possession but one.

This one should be easy to figure out. Against Florida State, McGary played 33 minutes almost exclusively at the five; he wound up scoring 14 points and grabbing 12 rebounds. Against Charlotte, the big man spent much of his 30 minutes at the four and wasn’t nearly as effective, scoring just six points, and while he had nine rebounds, only one was offensive. His comfort level with the offense was night and day in those two games, and a big part of that was where he was on the court. There isn’t much difference between the one and two or the three and four, but the five is much different than the four in John Beilein’s offense, and it looks as though that’s where McGary needs to be.

To be fair: Beilein was between a rock and a hard place once Glenn Robinson III went down against Charlotte in the first half. He either went with the two big lineup, inserting either Jordan Morgan or Jon Horford at the five while McGary ran the four, or he played Zak Irvin at the four. But Irvin is so unfamiliar with the position that Horford and Morgan ended up playing a combined 27 minutes. The two-big lineup is good for rebounding, but it hurts the lineup for two reasons: the lack of explosiveness offensively from both Horford and Morgan, as well as the discomfort for McGary, unable to get those putbacks that are so essential to his production.

4) Caris LeVert is the team’s best creator, but he needs to be more consistent

By “creator,” I mean for others. Stauskas is the best option when creating his own shot, but LeVert has shown a knack for getting in the lane using the pick-and-roll and either finding shooters or hitting the roll man. Unfortunately, while LeVert has performed very solidly against smaller schools, against Michigan’s two major-conference opponents — Iowa State and Florida State — LeVert has been pretty less productive. Over the weekend, LeVert averaged 15.5 points against Charlotte and Long Beach State — but scored only five points against Florida State. To be fair to LeVert, he did pull down eight rebounds and dish out five assists in that game, but his scoring was still down.

That being said, if LeVert can be consistent, it will open up all sorts of opportunities for Michigan’s bigs, especially its two more offensively-challenged centers. LeVert is quick off the bounce and he knows how to use screens, often shielding his defender from the play with his body and getting the ball to the roll man at the exact right spot where he can finish easily — skills similar to one departed Player of the Year point guard I can think of. The season to this point has been centered around players figuring out their roles, and it seems as though this is Caris’s.

I’ve been seeing people on Twitter maligning Michigan’s rebounding, but the truth is it was pretty good overall in Puerto Rico. Here are the rebounding numbers for each game:

All told, Michigan balanced one surprisingly dominant rebounding game (Florida State) with one pretty bad half (2nd half against Charlotte). Considering that the Seminoles are one of the tallest teams in the country and Michigan pretty much had its way with them on the boards, that performance was especially telling. Against Charlotte, Michigan had a dominant first half on the glass, but followed that up with one of the worst rebounding performances I’ve seen from a Michigan team in the latter frame. A true assessment of Michigan’s rebounding ability probably lies somewhere in between those two poles, and I’d bet it drifts toward the former.