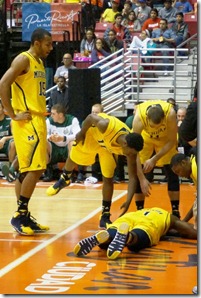 Michigan’s 63-61 loss to Charlotte in the championship game of the Puerto Rico Tip-Off was disheartening, but perhaps even more worrisome than the loss itself was the injuries suffered by two of Michigan’s most important players, Glenn Robinson III and Nik Stauskas. (Photo: Sanjiv Gupta)

Robinson went down late in the first half after a hard foul, hurting his back. Stauskas twisted his ankle about midway through the second half and was in obvious pain the remainder of the contest.

During a press conference today to recap his team’s performance at the Tip-Off, John Beilein addressed the two injuries, but admitted he and the rest of the coaching staff are still in wait-and-see mode.

“We didn’t do anything since we came back,” Beilein said. “We stretched, we lifted, we watched video, we took yesterday off. So I’ll know more. But we’ll see. Both of them had some pretty good injuries.”

When asked if either injury is expected to be long-term, Beilein said he didn’t think they were, but as far as the two players’ availability for Michigan’s game against Coppin State on Friday, “I’ll know more probably after tomorrow’s practice.”

If either injury is long-term, it would be a significant blow for the Wolverines. Stauskas is currently playing 85.3 percent of available minutes and is also the team’s highest-usage player, finishing 23.6 percent of Michigan’s offensive possessions according to Kenpom.

While Robinson’s production hasn’t been what many expected at this early point in the season, having him available is critical because he is capable of guarding and rebounding as a stretch four. Robinson frees up McGary to play his more natural position, and their chemistry is undeniable when they share the court. Robinson’s backup, Zak Irvin, struggled against Charlotte and isn’t necessarily best suited to play the four position.

Much is still unknown about the injuries to two of Michigan’s most important players, but at least we have some more specific terms. Robinson has a “bone bruise” in his back, according to Beilein, while Stauskas has an ankle sprain — though we don’t know it’s severity or whether it’s a high or low ankle sprain.

Beilein was cautiously optimistic regarding the relative seriousness of the injuries, but noted the two would obviously be limited in practice.

“I don’t think it’s significant but there’s swelling (in Stauskas’ ankle),” Beilein said. “So you just never know until he gets out there, so we’re treating it cautiously. Both will probably do very little today if anything.”