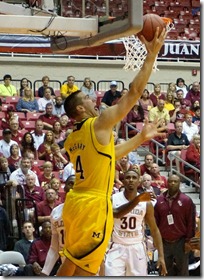 Last weekend’s Puerto Rico Tip-Off was a tournament of highs and lows for Mitch McGary. Michigan’s big man didn’t play much against Long Beach State because the coaches wanted to rest him for the Wolverines’ next game. This proved to be a solid decision when Michigan needed every bit of McGary’s 33 minutes against Florida State in order to pull off a dramatic come-from-behind victory. Unfortunately, that game was followed by a lackluster performance against Charlotte in the championship game, in which McGary notched only six points.

Michigan coach John Beilein said the inconsistency is all part of the early-season effort to get McGary back into playing shape.

"What we’re trying to do now is just get him back into the type of shape he was in last March and February," Beilein said. "As I mentioned in the radio show this morning (on the Michigan Insider), he hasn’t even lifted weights, his leg strength is going to lead to poor endurance. You could see it — we were able to save him against Long Beach and he had it all on Friday but didn’t have it all Sunday. It’ll take some time, but that’s something we’ll figure out in the next couple days. If he’s one of the best big men in the country, you’re not going to bring him off the bench. But there has to be a time to that and his has a little bit to do with his back and his warm-up and all that."

Part of the reason McGary had trouble against Charlotte was because of circumstance. The All-American was playing out of position throughout most of the game because of an injury to Glenn Robinson III in the first. The injury forced Beilein to insert his two-big lineup for much of the second half — a lineup in which McGary is slotted at the four, a position that is more perimeter-oriented.

"Obviously they knew his reputation. He got one offensive rebound in that game. That’s a very low number for him," Beilein said. "He is still developing when he’s playing different positions, and we are too. I mean, (McGary has hardly practiced at all) … I’m sure you’ll see him at both positions but when he’s in that starting lineup and in rhythm, I know he’ll be a better player."

When Beilein was asked about McGary playing the four, he said it’s determined mostly by the opposing team’s lineup.

"All depends on the opponent," Beilein said of what goes into the decision. "If they would have had a stretch four who was going to be on the perimeter, we wouldn’t have been in that situation. But there were two guys who were going to stay close to the post, and have a more traditional old style that everybody used to play and it was a no-brainer to get him in there. However, it’s still, we haven’t had the time to think about how we could use him in the offense. It’s not there yet. We’ll have to develop it.”

The Wolverines’ second half against Charlotte was pretty bad all around, but one statistic that especially stood out was its defensive rebounding. Michigan simply couldn’t keep the 49ers off the offensive glass, allowing Charlotte to rebound 50% of its missed shots.

While some may blame the big men in the post for not boxing out, John Beilein said that of far more importance was Michigan’s lackluster perimeter defense. Why? Because it’s awfully difficult to help on defense and box out at the same time.

"The rebounds, there’s no way you can box out and give help defense at the same time," Beilein said. "The way they took number 21, (Willie) Clayton, they just stuck him underneath the basket, threw something to the rim, where our point guard’s going to get in front of your point guard, and when Mitch or somebody steps up, he’s got the whole board to himself. There’s no opportunity to box out, there’s nothing. The whole thing starts with bad perimeter defense, individually and as a team, that’s something we’ll learn."

Derrick Walton didn’t play much in the second half, but unfortunately the freshman had some defensive miscues that caused the coaching staff to turn to Spike Albrecht for most of the championship game — Albrecht played 27 minutes to Walton’s 17.

"We had a non-shooting point guard for Charlotte, and four or five times we decided he was going to shoot from half court and he drove right by us," Beilein said. "That didn’t make sense. It’s not just Derrick, it’s everybody. We learn, we learn how to guard different people at different levels."

Despite Walton’s defensive mistakes, Beilein still has confidence in his young point guard.

"I think he wore down," Beilein said. "He did not have that same bounce as that last game, and that’s why we chose to stay with Spike more in that game. Gradually, his endurance will go up. Four (games) in eight (days) for an 18-year old kid, that’s a lot for him. He’ll bounce right back now."

Coppin State to provide another test for the young Wolverines

In all of the hoopla surrounding the Puerto Rico Tip-Off and then Michigan’s highly-anticipated matchup with Duke at Cameron Indoor on Tuesday, somewhat lost in the shuffle is the Wolverines’ game against Coppin State on Friday.

Fang Mitchell is the legendary coach of the Eagles, having won six conference championships. However, his team hasn’t been relevant in a while, as its last MEAC championship was in 1996.

Beilein said he isn’t fooled — this team is a throwback.

"This is a team like the Coppin State teams of old who upset people in the first round of the NCAA tournament," Beilein said. "This is the best team that I’ve seen Coppin State have (recently). I haven’t seen them in a few years, but this could be a MEAC championship team. They had a really tough year last year. But those guys got a lot of minutes, and now they’ve brought in four junior college transfers and they are all playing at a high level. They went to Oregon State and won; they gave Cal a good game; they lost at home to a good Wagner team, but they will give us a really good game. It will be great for us. Hopefully it ends in a win, I hope it’s not that great for us. But it’s going to be a tough one, and it’s going to be a great game. You want to see a great school play with a great basketball tradition — Fang Mitchell, there’s not a better coach."