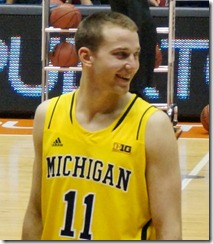 Our weekly feature tracking the performance of Michigan players performance over small segments of the season.

I’d say averaging 23 points per game at the Puerto Rico Tip-Off, taking home MVP honors and making numerous big plays down the stretch warrants this almost-perfect score. Stauskas has exceeded expectations throughout this early portion of the season and he has taken on the role of workhorse in Michigan’s offense. He is Michigan’s most-used player and can score from anywhere on the court, often driving to the hoop and drawing fouls — Stauskas’s 46 attempted free throws is already over half of his total from last season.

LeVert had an all-around solid tournament in Puerto Rico. Even taking into account his low point total against Florida State (five), the sophomore came up big when Michigan needed him and found other ways to contribute. For example, LeVert pulled down eight rebounds and handed out five assists against the Seminoles while logging 39 minutes. He also had a great game against Long Beach State, totaling 20 points, five rebounds and four assists. LeVert is moving into Tim Hardaway Jr. territory with his versatility, and it’s clear Beilein is comfortable with the ball in his hands running the offense — the only reason LeVert didn’t play more against Charlotte was because of foul trouble, and he carried Michigan at the end of that game when Stauskas twisted his ankle.

Michigan’s All-American big man is still playing himself back into shape. He had one absolutely outstanding game against Florida State bracketed by two so-so performances against lesser opponents, and Beilein credited part of McGary’s down numbers against Charlotte to fatigue. That being said, his performance against the Seminoles was vintage McGary: in 33 minutes, McGary scored 14 points and pulled down seven offensive rebounds to go with five defensive, giving him his first double-double on the season. There’s not doubt that McGary is on his way to having a special year — when he regains his timing and finds his way in the offense, watch out.

Michigan’s backup point guard was solid in a limited role over the weekend. Albrecht played 12 and 11 minutes in Michigan’s first two games, respectively, and made the most of his playing time against Florida State: the sophomore hit his only attempted 3-pointer, scored five points and handed out an assist to go along with no turnovers. Albrecht played significantly more minutes in the championship game against Charlotte when Beilein yanked Derrick Walton after some defensive miscues, and the lead guard was decent but couldn’t find his long-range shot, going 1-for-4 from deep.

The freshman point guard had a really rough championship game, but don’t let that cloud your view of his accomplishments in Michigan’s other two games. Walton has had to grow up fast this season, and so far he has performed well. He had his best game against Michigan’s best opponent, Florida State: in a grueling 34 minutes, Walton scored 15 points on nine shots, dished out six assists and pulled down four rebounds. I’d venture to guess his lackluster defensive effort was due in a large part to fatigue from playing so many minutes against the Seminoles.

It has been a somewhat forgettable season thus far for Robinson. The sophomore kicked off the weekend in Puerto Rico on a high note, playing an efficient 33 minutes with 14 points on nine shots and four assists as well as collecting two offensive rebounds. After similar numbers against Florida State — in addition to improved rebounding — Robinson was injured in the first half of Michigan’s championship game against Charlotte and has a bone bruise. Robinson still hasn’t quite found a rhythm this season, and the last thing he needs is to lose time with an injury.

Morgan had a pretty good game against Charlotte, but other than that he had a tough tournament. Against Long Beach State, he wasn’t very productive and he only played two minutes in Michigan’s second-round matchup with Florida State. That being said, he deserves credit for keeping Michigan alive against Charlotte, pulling down five offensive rebounds (nine total) and forcing a key jump ball late after a missed free throw by Spike Albrecht that retained possession for the Wolverines.

Michigan’s other experienced big big man did not have a great tournament either. Horford didn’t record a rebound against Long Beach State, and scored two points in each of Michigan’s three games on the weekend. He also struggled with his jumpshot against Charlotte, missing two short baseline attempts.

Michigan’s freshman off guard has had a tough go thus far, and it’s sure to improve for the Fishers, Indiana native. He had his highest scoring game of the tournament against Charlotte, tallying eight points. Unfortunately, he needed 14 shots to get them.