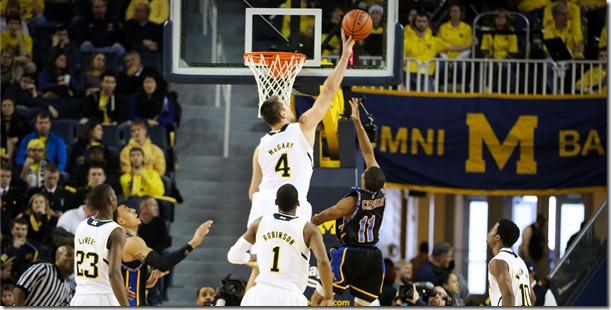 On the heels of its worst offensive performance of the year, and playing without its best offensive player, Michigan’s offense bounced back in a 42 point win over Coppin State on Friday.

The Wolverines scored 87 points on 59 possessions in their most efficient offensive performance of the John Beilein era. Scoring 1.47 points per possession, Michigan got offensive production from nearly every player that stepped on the floor as 11 different Wolverines found the score sheet. Zak Irvin led the way with 24 points on six three-point makes while Caris LeVert (15 points) and Glenn Robinson III (14 points) also reached double figures.

The win was pivotal to get the Wolverines headed back in the right direction after a frustrating loss to Charlotte and heading into their most difficult game of the non-conference season at Duke on Tuesday night.

We’ll look closer at the offensive and defensive numbers but Michigan dominated the rebounding battle on both ends of the floor. The Wolverines rebounded 55% of their missed shots, scoring 22 second chance points, and allowed Coppin State to rebound just 16% of its missed shots for only two second chance points. The domination on the glass set the done from the opening jump.

This was the most efficient offensive game that Michigan has played under John Beilein (topping a 1.46 PPP against Minnesota in 2010) and the offensive performance was driven by great shooting in all phases. The Wolverines made 10-of-29 threes, 22-of-33 twos and 13-of-14 free throws. Michigan got 39 points off the bench and 19 of its 32 makes were assisted in a thorough offensive performance.

Coppin State managed just .76 points per possession offensively, but its problems were very different in each half. In the first half, Michigan struggled to defend the interior – allowing CSU to shoot 67% on twos – but the Eagles turned the ball over on 30% of their offensive possessions and attempted just one free throw. If you read the game preview you would remember that the strengths of the CSU offense were getting to the line and protecting the basketball. In the second half, Michigan did a better job of contesting shots. Coppin State shot just 35% on twos, didn’t make a three and Michigan blocked five of 25 second half shot attempts. The foul discipline and turnovers from the first half evaporated in the second but Coppin State just couldn’t make a shot and Michigan rolled thanks to its stellar defensive rebounding.

There’s little difference between a 20 point and a 40 point in the grand scheme of things but Michigan needed a game like this to regain some confidence. It was few times this season that Michigan was able to dominate a game for 40 minutes on both ends of the floor. If the Wolverines want to stand a chance at Cameron Indoor on Tuesday, they’ll have to do that again.