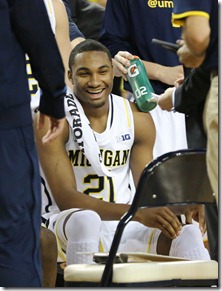 Zak Irvin doesn’t show much emotion, at least not when he’s speaking with members of the media. His answers to questions are perfectly polite but often short; in a soft monotone, he deflects attention from himself and is eternally deferential to his teammates. Since I began covering Irvin, before his junior year in high school, the most emotion I can recall him showing in an interview is a sly, confident smile. (Photo: Dustin Johnston)

Needless to say, Irvin broke open that smile a few times during his post-game interview following Michigan’s 87-45 rout of Coppin State on Friday. But he seemed to betray an added emotion after the game: relief.

"It’s definitely a relief to finally see some shots go down," Irvin said after the game. "Hopefully I can continue to do this as the year goes on."

Irvin hasn’t experienced the smoothest of starts to his career as a Wolverine. The freshman was averaging about 16 minutes per game and he couldn’t find his shot — before Friday, Irvin was shooting just 19 percent from beyond the arc. He was coming off a particularly demoralizing shooting performance against Charlotte in which he made only two of his seven long-range attempts.

But after that slow start, it’s fair to say Irvin had a breakout game against the Eagles: the Fishers native led the Wolverines in scoring with 24 points, hitting 6-of-10 3-pointers in 26 minutes, filling in for the injured Nik Stauskas. He also pulled down five rebounds, dished out three assists and played probably his strongest defensive game of the season.

While this level of play isn’t what Michigan fans have been used to seeing this season, it’s definitely the level at which Irvin is used to playing. As Michigan’s highest-ranked recruit in the 2013 class, Irvin was known as a knockdown shooter and lockdown defender. In practice, his teammates have seen his abilities firsthand and encouraged him to keep his head up through the difficult first few games.

"He’s a shooter. He can shoot it. I’ve known him since high school, so I always knew that," Glenn Robinson III said. "I’m just excited for him to be able to knock down six shots. Hopefully he’ll come back and help us every game from now on. That’s something that’s really going to build his confidence, especially as a freshman. It’s important to have these big games — I had a couple of them last year and that really boosted my confidence."

Anyone familiar with Irvin from his high school basketball days knew it was just a matter of time before the wing found his stroke. He displayed no shortage of confidence against Charlotte, and the seven 3-pointers he took against the 49ers in Michigan’s final game of the Puerto Rico Tip-Off were all shots John Beilein liked. His coach said he wanted Irvin to keep shooting despite not being able to hit anything.

Why? Because Beilein knows those are shots Irvin makes. And his teammates know that, too.

"I wouldn’t have been able to do that without my teammates," Irvin said. "They kept telling me to keep my head up, stay confident out there and that I’ll knock down the next one. I was able to do that this afternoon."

He proved them prophetic on Friday. At one point, Irvin knocked down a 3-pointer on three straight Michigan possessions in the second half. And hitting shots caused his confidence to spill over into other areas of his game — Irvin’s defense was as good as it’s been all year, and his five rebounds were big after an conspicuous absence on the glass for the majority of the early season.

Beilein was impressed with Irvin’s performance, both offensively and defensively.

"We talked about his shots. He’s got the ability to get his own shot at times, he’s got great lift and a pretty shot. It was sort of Tim (Hardaway Jr.’s) strength as well, and you can really use that. Just be a little more selective and make sure you’re in rhythm," Beilein said. "Zak can shoot and defend. And really those are his two things. So really our defense picked up a lot. Only giving them 22 points in the second half was great."

It’s impossible to know how this sort of performance will affect Irvin going into Michigan’s high-profile matchup with Duke on Tuesday. The freshman played great, but it was still Coppin State and it was still in the friendly confines of the Crisler Center.

One thing’s for sure: if Irvin can consistently knock down shots, it opens up a myriad of opportunities for Michigan, both on what the Wolverines are able to do on offense as well as how the coaching staff can use different lineups. Against Duke, a team with a great offense and an average defense, Michigan will need all the offensive firepower it can get.

Irvin called his performance against Coppin State a "huge confidence-booster" going into Tuesday’s game against the Blue Devils. Robinson didn’t mince words talking about talking about the importance of Irvin’s breakout game.

"It’s definitely important," Robinson said. "Especially for a guy like Zak, coming off the bench and doing that pump-fake, one dribble pull-up, that’s his game. That opens up everything else, and having different weapons will definitely help us, especially going against a team like Duke. They have multiple weapons themselves"