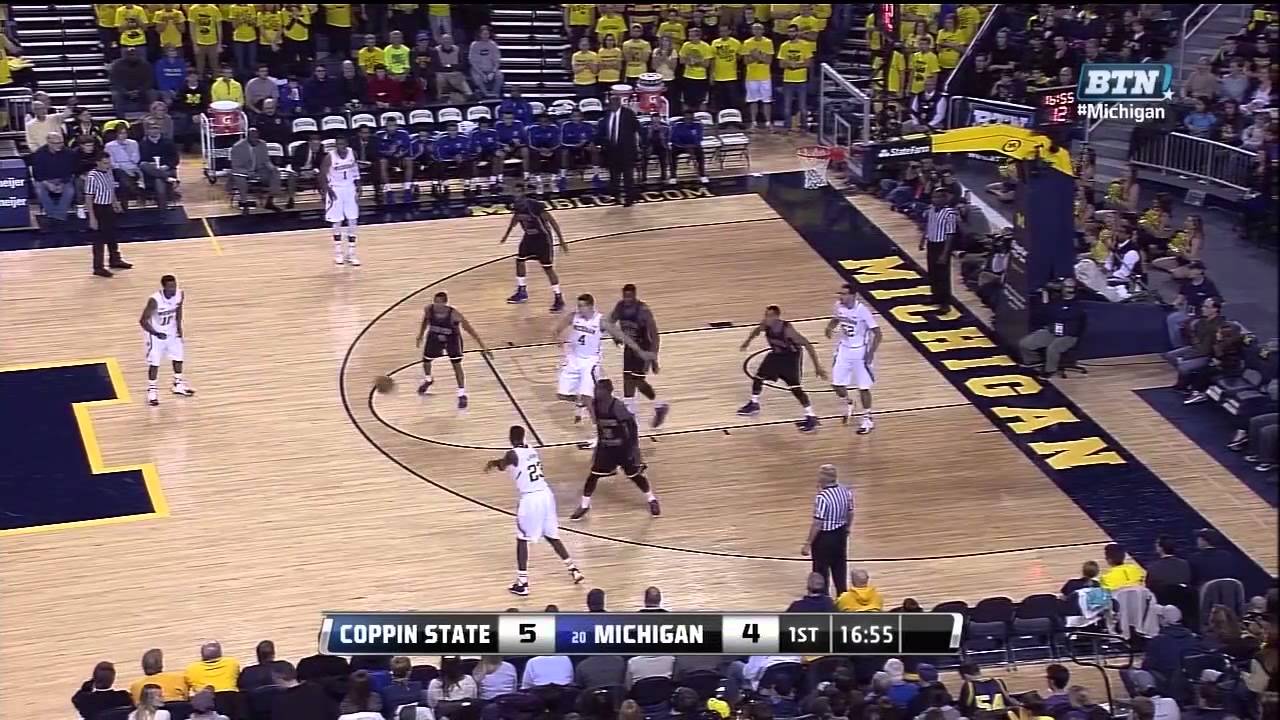 Thus far this season, Jordan Morgan’s offense has been largely MIA in the sparse minutes he’s logged. But on Friday, Michigan’s fifth year senior got the start and made the most of it, scoring six of Michigan’s first ten points and doing so in a variety of ways. With Coppin State employing a 2-3 zone for the majority of the first half, opportunities for the bigs were in the middle, and that’s precisely where Morgan got his points. On the first play of the sequence, we see Morgan and Mitch McGary alternating cuts to the free throw line. Morgan makes a good strong cut and demands the ball. He makes a nice turn and with Sterling Smith watching McGary running the baseline, he has a clear path to the hoop. On the next play, Morgan is just in perfect position to rebound Glenn Robinson III’s missed 3-pointer — he boxes his man out, elevates and gets the putback. Imbued with some confidence, Morgan cuts to the middle from the perimeter and receives the ball, rising for a short jumpshot. Morgan’s offense was a pleasant surprise in this one, even if the renaissance was short-lived: the big man did not score again the rest of the game. Overall, however, it was a productive night for Morgan: six points, five offensive rebounds and a block in 16 minutes? Not bad.

2) Michigan strategizes to beat the 2-3 zone

The Wolverines saw a few different looks from Coppin State defensively. The different sets mostly broke down into a 2-3 zone to start the game, followed by a brief experiment with an extended, trapping 2-3 and then finally straight man-to-man for most of the second half. Obviously, it didn’t matter much which defense the Eagles chose to employ — Michigan notched the most efficient offensive game of the Beilein era with 1.47 points per possession. These two clips examine how the Wolverines attacked Coppin State’s straight 2-3 zone. In the first play, Michigan has both of its bigs camp out at the free throw line, a look we didn’t see last year against Syracuse or EMU, the two notable 2-3 teams Michigan played. Usually, it would have whoever’s playing the four run baseline while the five occupies the middle of the zone. Derrick Walton gets the ball to Jordan Morgan and immediately Walton and Caris LeVert drift across the perimeter, with LeVert sliding to the corner, while McGary cuts through the middle to the basket. Morgan makes the right play, hitting LeVert in the corner. The defensive rotation is poor and LeVert takes advantage of his defender being out of position, taking the ball to the hoop for a nice finish in traffic. Having two bigs at the free throw line shifted the entire defense up and left the baseline wide open. It also left the defense vulnerable when Michigan spread the floor after Walton got the ball to Morgan — the Wolverines went from a very tightly-packed, almost congested set to something close to their usual spacing so quickly that it was difficult for Coppin State to recover. On the next play, we see a more conventional strategy against the 2-3. With players rotating in and out of the middle of the zone, McGary stalks the baseline, looking for an opening. One observation: I really like LeVert in the middle against that look because of his length and vision — it’s better than inserting Morgan there, as would usually be the case. Walton makes a great pass to McGary after the big man slips behind the defense.

Coppin State tried a few different defensive looks, but it didn’t execute any particularly well. Here, they try to use an extended 2-3 with some trapping action but they end up getting burned. On the first play, two Eagles trap Caris LeVert when he receives the ball from Spike Albrecht crossing half court. LeVert gets the ball back to Albrecht and the defenders are pretty slow to get back. Meanwhile, Jordan Morgan is drawing the defense up by flashing to the middle. The two post players for Coppin State get caught ball-watching and Spike lobs a pass clean over them to Jon Horford, who is running baseline. Horford slams it home. This was a great pass by Albrecht, who completely ignores the middle man, Morgan, when he saw the defense had lost track of Horford and was playing too far up. The second play of this sequence is pretty simple, and indicates the time-tested method for beating zones: make 3-pointers. It starts similar to the first play, with LeVert getting trapped at half court. LeVert gives the ball back to Albrecht, who fires it quickly over to Zak Irvin, who makes one of his many long-range shots on the night. Two things to notice about these plays: Michigan’s court spacing and ball movement. The Wolverines use the entire court — Albrecht is at half court, Morgan is at the top of the key, Horford is at the basket — making Coppin State run to get back into position after trapping and keeping them off-balance. Then, Albrecht makes confident, decisive passes in order to not give the Eagles any time to recover after trapping. Michigan dominated every look Coppin State gave them defensively.

What a game for Zak Irvin. The freshman hit six 3-pointers, led all scorers with 24 points, pulled down five rebounds and dished out three assists. Irvin had a special game, and it started early. His first two 3-pointers came in the first half, but he did the majority of his damage in the latter frame, especially after Coppin State switched to a man-to-man look. About six minutes into the second half, Jon Horford sets an off-ball screen for Irvin, who pops out to the 3-point line. Caris LeVert finds him on the wing and Irvin hits his first of three consecutive 3-pointers. On the next play, Michigan takes advantage of some confusion from the Eagles after a fast break. Irvin gets downcourt and drifts to the corner, and multiple Coppin State players help on Horford, who’s cutting to the basket. Walton ends up with two Eagles on him, and Irvin is left all alone in the corner. The next play sees pretty much the same action, with Michigan again getting out on the fast break. LeVert sees Irvin all alone in the corner and feeds the hot hand. On the final play, Irvin’s defender completely gets caught ball-watching and inexplicably leaves Irvin all alone in the corner. Irvin had a great game, and his teammates deserve credit for getting him the ball, but Coppin State played some seriously ugly defense all game long.

5) Michigan tallies five blocks in the second half

In the first half of this game, Michigan didn’t do a great job defending the paint — Coppin State hit 67 percent of its two-point field goal attempts in the opening frame. Then, the Wolverines really tightened things up in the second half, allowing the Eagles to score only 22 points. A big part of that was an increased focus on protecting the basket: Michigan had five blocks in the second half. In the first play of this sequence, Caris LeVert does a poor job closing out on his man after he receives the ball at the 3-point line, letting him drive to the hoop easily. Luckily, Mitch McGary slides over from his assignment to provide some help defense and swats the shot into about the third row. As McGary gets his legs back, plays like this will be more common. However, it may be a blessing and a curse: McGary has a tendency to get carried away going after balls he can’t get to and winding up out of position for defensive rebounds. On the second play, it looks as though Derrick Walton does the dirty work on Jordan Morgan’s assignment, ripping the ball, while Morgan puts his hands up and deflects the ball toward the opposite end of the court. Jon Horford is probably the team’s best shot-blocker because of his athleticism and length, and he displayed that ability in the final three plays of this sequence. First, he went up and got his hand on a ball put up by a jump shooter, something you don’t see every day. On the second play, Horford redeems himself after ignoring a defensive rebounding opportunity by blocking a shot at the rim on an offensive putback. Finally, Horford swats away a wild shot attempted in an effort to get a whistle.