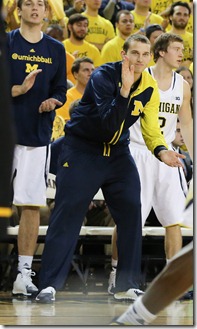 During Michigan’s final game in Puerto Rico, Nik Stauskas went down with an ankle injury in the second half. He was rendered ineffective for the remainder of the game and was forced to sit out during Michigan’s game on Friday, a blowout win over Coppin State. (Photo: Dustin Johnston)

Will Michigan’s most productive player thus far be ready for the Wolverines’ biggest game of the season, against Duke on Tuesday? Michigan coach John Beilein said on Monday that he’s still not sure — much depends on what Stauskas does in practice today.

“He hasn’t been able to do anything full-go yet, so we’ll see more how he does today,” Beilein said. “If he can play well today in practice, then we’ll play him tomorrow. If he’s not moving the way he needs to move today in practice, we probably wouldn’t use him.”

Michigan certainly hopes Stauskas can go. Duke provides the Wolverines with their greatest challenge of this young season and Stauskas has been the player who makes Michigan’s offense go. He is the most-used and most-efficient Wolverine on offense, with an offensive rating of 132.2 and an effective field goal percentage of 63.8, which places him in the top-100 in the country.

Even more than his offensive output, Stauskas has been the go-to player Michigan has turned to in late-clock situations and the player it has relied on to find the basket late in games. Stauskas was absolutely pivotal in Michigan’s overtime win against Florida State and Puerto Rico, and he had already tallied 20 points before he was injured against Charlotte.

The possibility of Stauskas’s absence obviously has implications for the rest of Michigan’s lineup. Against Coppin State, Beilein went with a starting lineup of Derrick Walton, Caris LeVert, Glenn Robinson III, Mitch McGary and Jordan Morgan — the two-big look that has been the subject of much early-season speculation.

Beilein said if Stauskas can’t go, fans will likely see the same starting lineup as they saw on Friday. The objective is to have as many players on the court who can create offense as is possible.

“(Whether or not McGary starts) depends on Nik’s situation, really,” Beilein said. “We wanted to make sure we had one more guy who can do some of the creative type of things that Nik does. Even though Nik and Mitch are very different players, they can create some things.We were trying to have as many active offensive players as we could in there. We’ll see how it goes, because they give us, obviously, very difficult matchups.”

The worry with playing Stauskas if he’s at less than 100 percent is how the sophomore will hold up on defense. Charlotte preyed on Stauskas in one-on-one matchups late in the game, and in many cases he was helpless to stop a driving 49er because he couldn’t put full weight on his ankle.

Fans hope they see Stauskas play against Duke on Tuesday, and Michigan’s player do too — Robinson said he liked the way Michigan played without Stauskas on Friday, but he knows exactly how important Stauskas is to this team.

“I thought we did a great job without Nik,” Robinson said. “Nik’s a great player and we’re definitely going to need him. Nik’s a great scorer and he’s what this team needs in order to win.”