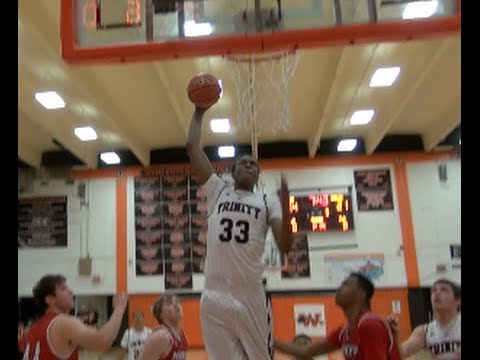 DJ Wilson traveled to the Midwest over the Holiday to participate in the State Farm Tournament of Champions in Peoria, Illinois. The tournament provided a great opportunity for Wilson to display his improved skillset on a big stage for the first time after committing to Michigan. He didn’t disappoint.

Wilson had a game-high 16 points, eight rebounds, three assists and three blocks in a 58-45 win over Champaign Central and tallied 10 points, 16 rebounds and five blocks in a 63-49 win over Fort Zumwalt North.

Iowa Elites was on hand and impressed with Wilson’s play, tweeting that “Wilson has been dunking all over the place today – dude plays above the rim” and “Wilson with the swat on one end followed by massive dunk his 3rd of first half kid is crazy.” Chicago Hoops’ Scott Burgess also was impressed, “Michigan commit DJ Wilson is a big time athlete! Two monster dunks early”

Wilson didn’t put up big numbers during his junior season but missed significant time due to injury. Michigan’s coaching staff became enamored with his game this July, when the 6-foot-8 forward was finally healthy again.

Jalen Brunson has also started his junior season with a bang. The Illinois point guard had a big game in front of Tom Izzo earlier this season, tallying 20 points, eight rebounds, three assist and three steals, and continued his strong play over Thanksgiving.

Brunson earned MVP honors at the Bison Classic, helping Stevenson to a 4-0 record. He scored 26 points in the tournament final as Stevenson cruised by Buffalo Grove, 67-44.

“(Jalen’s) got a second or third sense of where his teammates are, what we need, and how the game is being called,” Stevenson coach Pat Ambrose said of Brunson’s ability to find open teammates and control the game. “He has a unique ability. The game goes slow for him. We see it every day in practice. He plays at a higher level.”

“We knew they were going to be physical,” Brunson said. “We had some good rotations and played good team defense.”

Jalen Coleman also had a solid showing at the TOC, leading La Lumiere to a 2-1 record at the event.

Michigan commitment Ricky Doyle has also gotten off to a strong start. He scored 21 points on 7-of-11 shooting with 10 rebounds and 28 points on 9-of-15 shooting and nine rebounds in early season wins over East Lee County and South Fort Myers.

We posted video of Doyle in early season action here

Nate Fowler off to strong start

Class of 2015 big man Nate Fowler has been on the Michigan radar for a while after playing his AAU basketball with 2015 priority Luke Kennard. Fowler’s game continues to develop and he’s off to a strong start in his junior year.

Fowler had 22 points and 13 rebounds in an early season win over Chaminade Julienne. Here’s some recent footage of Fowler in action: