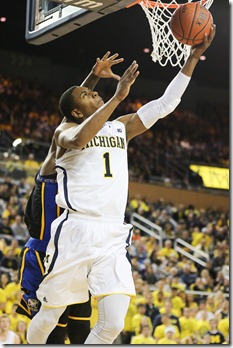 In his short career at Michigan, Glenn Robinson III has played Indiana for a Big Ten championship, Kansas and Florida for a spot in the Final Four, Syracuse to get to a national title game, and Louisville for everything. (Photo: Dustin Johnston)

But even with all that experience, Robinson conceded that in preparing for Michigan’s game at Duke on Tuesday he still feels the familiar mix of emotions he always gets before big games.

“I know coming in my freshman year, before a game like this I would have been happy, excited, nervous,” Robinson said on Monday during a press conference. “And now it’s sort of the same mood.”

Happy, excited and nervous are all apt descriptions for a player staring down a road trip to Cameron Indoor Stadium, one of the toughest road environments in college basketball. However, there is one circumstance working in Michigan’s favor: last season the Wolverines’ toughest road true test before the Big Ten season was Bradley; this season, they have already gone on the road against Iowa State. While Michigan didn’t win that game it was still useful for the young players a point of reference.

John Beilein compared the two venues, saying Duke is one of a few very special places to play in college hoops.

“I think it’ll be very similar to Iowa State,” Beilein said. “I think there are several venues in the country that have this type of setting, Iowa State being one of them. There’s more than a few — that’s why college basketball is so special. But when you look at those type of environments, Duke’s a special one, as well. It’s another opportunity for us. You don’t remember every win, but you remember wins against top-flight, top-coached teams on the road. And that’s the objective — to go down there and come back with a victory.”

Obviously, it’s not just the crowd Michigan will be dealing with. Duke is an explosive offensive team with loads of talent. The two most notable offensive players so far this season have been freshman Jabari Parker and Mississippi State transfer Rodney Hood. Both are 6-foot-8, and both possess skills that allow them to play anywhere on the court.

Needless to say, Beilein has a job ahead of him trying to figure out the weak spots in an offense that’s ranked as the fourth-most efficient in the country by kenpom.com.

“Everybody talks a lot about Jabari Parker, and he’s special. He does things that Kobe did as a first-year pro and LeBron did as a first-year pro. He’s a tremendous, tremendous player,” Beilein said. “But Hood is really good. I think they have seven players that are on their third or fourth year of college. Even thobugh they have some young players playing. Hood has really been good. They run a lot of things though the two of them. Obviously their guards are experienced as well. Experienced guards know how to win, and Duke’s won a lot of games.”

Robinson will likely find himself matched up with Parker for stretches of this game. The two go back to their high school days, when they would find themselves at the same camps and AAU events in the summer.

The sophomore was quick to praise Parker, but also emphasized that Duke has plenty of talent that deserves attention outside the gifted freshman.

When asked if their personal relationship adds any extra motivation to the matchup, Robinson responded: “Definitely, definitely. Anybody I’m friends with, we’re friends off the court but once we step on the court, we’re competitors.”

For Beilein, the test of his team will be its ability to block out the chatter that comes with playing a nationally-televised, high-profile game.

“There’s a lot of noise, and I’m not talking about the noise of the crowd even though that’s obvious,” Beilein said. “There’s a lot of noise that goes on in a road game. You have to block out all that noise, all that talk, especially big road games like this, and just focus on the next play, on making the right play, forgetting about the last play, defending. That’s a major step when you go over there.”