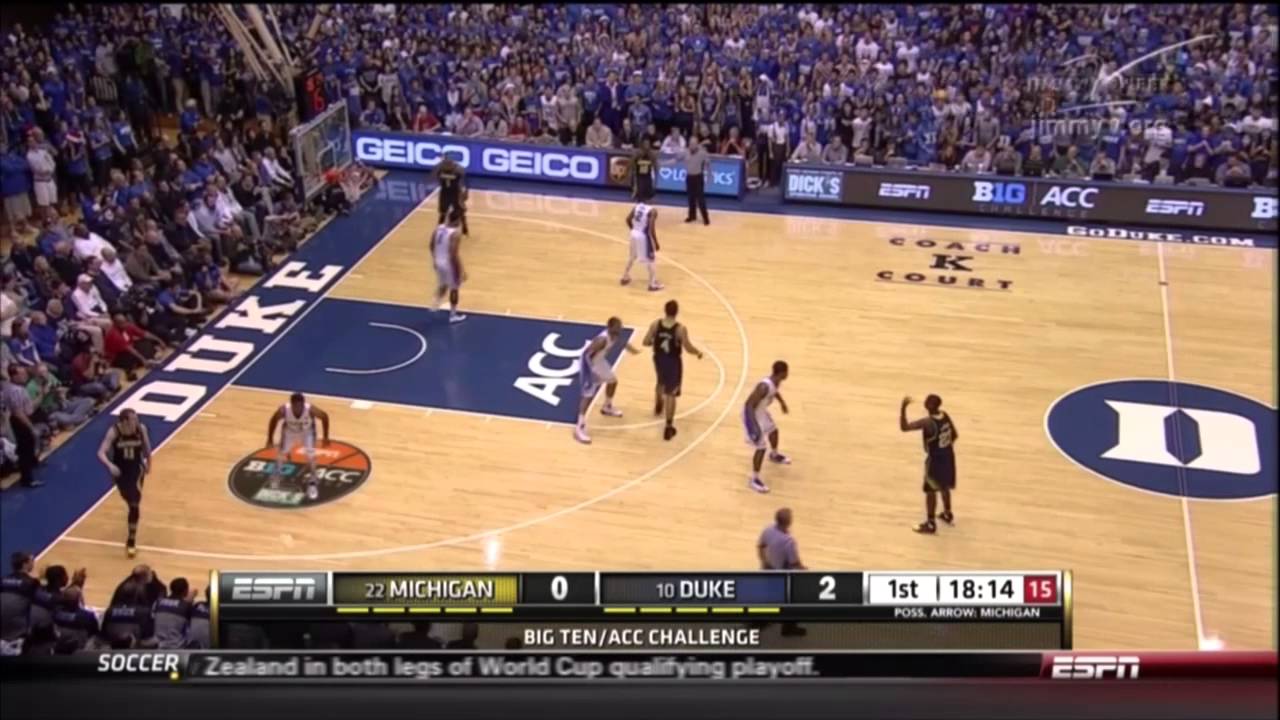 1) Michigan looks shaky out of the gate

This was Michigan’s biggest game of the season to date. That combined with the fact that the Wolverines were playing in one of the most hostile environments in college basketball makes the early-game nerves understandable. Michigan missed its first three shots, which in and of itself isn’t significant — it was how they missed them that made it obvious the Wolverines were dealing with some big-game jitters. On Michigan’s first offensive possession of the game, Mitch McGary dominated the ball, going one-on-one against Josh Hairston. After some dribbling and an attempt at a spin move, McGary missed the layup badly. It seemed as though, for much of this game, McGary was trying to do too much, forcing the issue and laying out of control instead of letting the game come to him. On the second play of the sequence, after an extended possession Glenn Robinson III makes a nice up fake to get open and takes one dribble in. Unfortunately, he air-mails the open two. McGary gets the offensive rebound, but Derrick Walton would miss a three later in the possession. Finally, McGary receives the ball just inside the 3-point line at the free-throw line extended. After a few pivots and with two Duke players surrounding him, McGary fires the long two and airballs it. Those three poor offensive possessions would set the tone for the rest of Michigan’s offense for the majority of the first half.

With about nine and a half minutes left in the first half, Spike Albrecht hit a 3-pointer to bring the deficit down to three. Unfortunately, that’s as close as Michigan would come to closing the gap. After Albrecht’s made three, Duke went on a devastating 9-0 run to establish a double-digit lead Michigan would be battling back from all night. On the first play, Caris LeVert is late getting around a screen off an inbounds play and Rodney Hood hits the open two (Duke killed Michigan on BLOBs all game). On the next possession, Michigan actually plays pretty great defense until the very end. Jon Horford and Derrick Walton display good communication on an on-ball screen and Horford gets back in time after hedging. Caris LeVert helps down when Duke dumps it in to Jabari Parker, but when Parker passes it out for an inside-out game, Michigan rotates effectively, with Walton effectively covering LeVert’s man, then sliding over to his own man with Zak Irvin providing help. Nice recovery there and good team defense. The breakdown occurs when LeVert gets caught ball-watching and allows Hood to drift to the corner, where Quinn Cook finds him for an open three. The frustrating part about that play is Walton had Cook pretty much dead to rights and Michigan’s bigs were both ready to help if needed — a good defensive possession with a lapse at the end. Later, Duke gets out on the fast break: Hairston misses a layup but Glenn Robinson III is called for goaltending. Then, it’s the Jabari Parker Show: He blocks a Horford dunk, then takes the ball all the way down the court and even though Michigan contests his layup, he still scores over Nik Stauskas. By the end of this run, Duke had gone from being up three points to being up 12, and Michigan would never fully recover.

These plays happened for one major reason: Mitch McGary’s ability to get a defensive rebound and start the fast break by himself. I’m not sure Michigan’s big man should be handling the ball too much in the half court, but I think any Michigan fan would endorse him starting the fast break and enabling the Wolverines’ transition game, especially when the half-court offense looks so lost. Each one of these plays was initiated by McGary getting the defensive rebound and starting the run-out. On the first play, McGary is already at half court by the time he gets the ball to Caris LeVert, who takes it to the rack and finishes strong. On the next possession, Michigan forces another miss and McGary pulls down the rebound. Again, McGary reaches half court before passing over the top to Derrick Walton. Walton has Glenn Robinson III open for an alley-oop but takes it himself instead, which proved to be the right decision — the freshman finishes at the rim with contact, earning the 3-point play. Loved the aggressive way Walton went toward the hoop, instead of falling away. Robinson gets his shot on the next play, with McGary again playing the role of instigator, getting the ball to Nik Stauskas across half court. Stauskas and Robinson have only one man to beat, and Stauskas tosses the soft lob to Robinson, who finishes. These plays were there to make throughout the first half, as Duke wasn’t hitting a particularly high percentage — about 40 percent from two, 30 percent from three. Michigan just didn’t rebound especially well. When McGary was hauling in defensive rebounds, Michigan’s transition game got going. This sequence closed the gap to seven points before Duke hit a three just before the half to push its lead to 10.

4) The Wolverines close the gap in the second half

Midway through the second half, Duke’s lead had held at about 10 points and Michigan was having trouble making headway. Both offenses struggled in the first half, but Michigan’s struggled more than Duke’s; both offenses were much better in the second half, but Duke’s was more improved than Michigan’s. The Blue Devils just always seemed to be a step ahead. But two shots from Michigan closed Duke’s lead to six and for a moment it looked, improbably, like the game was within reach. Down 11 points, Zak Irvin got things started for the Wolverines. The freshman took advantage of some rare lackadaisical Duke defense by Josh Hairston, who pretty much gave Irvin an open midrange shot after a handoff and psuedo-screen by Spike Albrecht. Irvin rose up confidently and knocked down the two. The following play is just a great individual effort by Caris LeVert. The sophomore took over the game offensively in the second half for Michigan with Nik Stauskas struggling, but it was just a little bit late and he needed some help. LeVert scored 20 points, grabbed four rebounds and handed out two assists — all in the second half. On this play, he uses a screen from Jon Horford and attacks when Horford’s defender is recovering. He had an open two, but LeVert wisely decides to attack the rim instead, knifing between two defenders and earning the 3-point play. His free throw cut the 11-point lead to six, but that was as close as Michigan would come.

Immediately following the 3-point play by Caris LeVert, Duke put the game away with a barrage of timely threes. The Blue Devils didn’t do anything special to get these shots, but two of the long-range bombs did come from a player who wasn’t used much in this game — Andre Dawkins, who played only 10 minutes but was 3-for-3 from the field and 2-for-2 from beyond the arc. Both of his makes came off handoffs. The first was contested reasonably well by LeVert, but on the second it appears LeVert was a little late recovering from an off-ball screen for Dawkins, and the Duke senior was able to fire largely unimpeded. On the third three, this one cashed by Quinn Cook, it looks like Michigan got burned on a double-team of Parker and Duke took advantage with excellent ball rotation. Nik Stauskas helps off his man, Matt Jones, after Parker receives the ball on the block. Parker smartly kciks the ball back out to Jones, and at this point Michigan is a step behind. Duke does a terrific job of finding the open man on the perimeter before Michigan has a chance to recover, and Cook hits the long 3-pointer. This stretch of plays extended Duke’s lead to 13, and the Blue Devils never looked back.