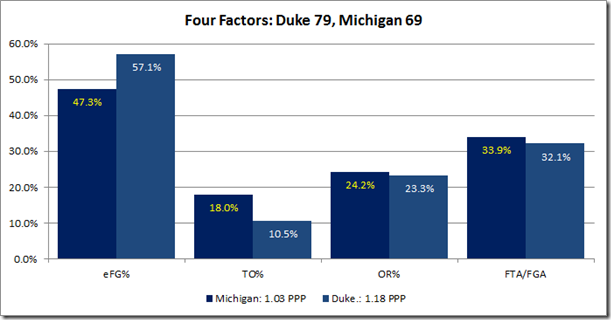 Michigan made just four field goals in the first 17:44 of the first half at Cameron Indoor Stadium but the Wolverines were able to remain within striking distance despite their anemic offense.

While the resiliency was impressive, it was clear that the Wolverines were no match for the Blue Devils. After Michigan had cut the lead to just six points with 9:01 to play, Duke pulled away thanks to two huge threes from Andre Dawkins off the bench. The Wolverine deficit would never reach single digits again despite a foul-filled final two minutes that saw Duke make 13-of-14 free throws.

Whenever John Beilein’s group was able to fix one problem, something else seemed to go wrong. The Wolverines were searching for answers while the Blue Devils had a winning formula. Duke stars Jabari Parker and Rodney Hood both had their moments but needed 27 shots to score 29 points. It was Duke’s complementary stars that doomed the Wolverines. Dawkins hit the big threes, Quinn Cook tallied 24 point sand nine assists, and Tyler Thornton and Matt Jones didn’t allow Nik Stauskas to make a single field goal.

Duke did a great job of taking away Michigan’s transition offense (especially transition threes) and Michigan’s half-court offense was reduced to isolation drives and high ball screens.  Michigan tallied just 12 assists to 12 turnovers and relied on Caris LeVert to bail it out offensively down the stretch. Duke defended the three-point shot well (something it has done all season) but the Wolverines’ failure to convert around the basket in the first half was disappointing. Michigan shot just 35% inside the arc in the first half compared to 65% in the second half.

Right now Michigan’s offense is a handful of talented pieces that don’t really know how to play together. There’s no guidance and the point guard play isn’t strong enough to pull it all together. That’s a new problem for a Michigan team that has been blessed with great point guard play for the last three seasons. Duke overplayed and denied on the perimeter defensively all game but the Wolverines never made them pay with a backcut. That’s a tell-tale sign that the offense isn’t all on the same page.

It was a scramble late game situation but it’s worth pointing out that with two minutes left John Beilein finally rolled out a lineup with Caris LeVert at point guard and it worked pretty well. I think sooner than later, that’s a look that Michigan will need to utilize this lineup more often, especially if the point guard struggles continue.

The Wolverines couldn’t have asked to play much better defensively in the first half. They held Duke to 1.04 points per possession despite a disappointing first half rebounding effort. Defense was really the only reason that Michigan was in the game at that point. In the second half, that defensive effectiveness deteriorated as Duke shot 73% on twos, 40% on threes and then hit all of the free throws down the stretch. When Michigan’s offense finally improved, it’s defense just couldn’t make quite enough stops to make a game out of things.

Duke hasn’t lost at home in non-conference play since 2000 so plenty of teams have ventured to Cameron Indoor and lost but Michigan has a lot to figure out. Listening to Coach K talk about how important it is for Duke to develop and get better, the same things apply to Michigan, it just isn’t quite as far along yet. This team is going to figure a lot of things out and is learning on the fly at some important spots.

But the Wolverines are also in a danger zone with three non-conference losses by December 4th. Next up for is another tune up against Houston Baptist before a big home game against Arizona. The Arizona game gives the Wolverines one last chance to leave to the non-conference with a signature win and they’ll have the opportunity to do it in the friendly confines of the Crisler Center. Beat Arizona and Stanford in December and the Wolverines suddenly have confidence heading into league play, drop another game and the questions will start to fly.