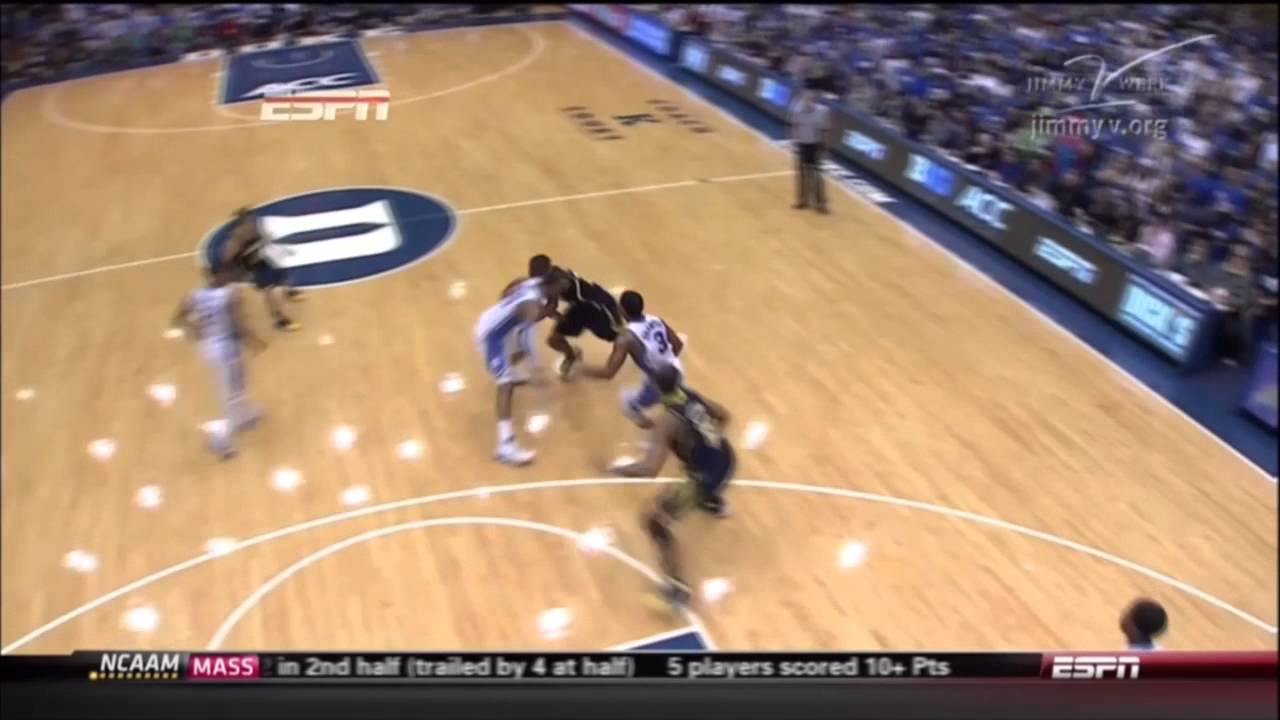 Whether it was because of the ankle injury Nik Stauskas sustained against Charlotte in Puerto Rico, just plain great defense, or a little of both, we don’t know. What we do know: Duke shut down Nik Stauskas Tuesday night in its 79-69 win over the Wolverines at Cameron Indoor Stadium. (Photo: Adam Glanzman)

The sophomore attempted only two field goals, both in the first half. He scored four points, all on free throws (and two on a technical foul against Duke). Compared to his normal output, Stauskas was invisible on the offensive end.

And as a result, for much of the game, so was Michigan.

“One of the keys for us was trying to limit Stauskas,” Duke coach Mike Krzyzewski said after the game. “Stauskas, we thought going into this game, was the best two guard we’ve faced so far this season. … In the halfcourt, there was a big emphasis on trying to keep the ball out of his hands and putting him away from his normal operating area. I thought Tyler (Thornton) and Matt (Jones) really did an outstanding job of that.”

That they did. Thornton and Jones split time guarding Stauskas and both were very effective. Duke’s strategy against Stauskas wasn’t rocket science: essentially, it came down to deny, deny, deny.

There were a few clear rules to Duke’s defense of Stauskas: never help off him; hedge really hard on all screens, essentially trapping him and making it difficult for him to see over the top; constantly deny him the ball by keeping your hands up and staying between him and the ball. These rules aren’t always easy to follow and execute, but Michigan made them easier with its anemic offense.

Another factor that makes it easier to play lockdown defense like the Blue Devils did on Tuesday is the fact that both Thornton and Jones both had a good idea of where Stauskas was going within the offensive sets. The obvious move when being face-guarded and overplayed on the perimeter is to cut back door — Stauskas tried that plenty of times, and was never got open. Good man-to-man defenders don’t get fooled on back-door cuts often.

“Wojo (Duke assistant coach Steve Wojciechowski) had the scout, and he was mainly responsible for the game plan. We practiced so hard these last couple days,” Krzyzewski said. “We tried to make sure we knew most of their offense. And then it’s just a matter of our kids working real hard to make sure you try to stop it. They still scored, but it was tough to score against us tonight.

The frustrating thing about the poor offensive output tonight wasn’t so much that Stauskas was held in check — it’s that the offense looked so helpless without his production. Stauskas is a great player, and could very well be Michigan’s best player on offense. But on a team with a first-team All-American big man and a wing that was projected as a lottery pick, it just doesn’t seem like the offense should shrivel up the way it did for the majority of the first half. Especially with the way Duke was keying on Stauskas defensively, the Wolverines needed to make the Blue Devils pay by finding production elsewhere.

John Beilein and his staff did a nice job of switching up the game plan in the second half, turning to Caris LeVert. Michigan ran most of its offense in the latter frame through LeVert, and it paid off: LeVert scored 20 second-half points and looked really good going to the basket and drawing fouls.

“We dialed (LeVert) up like crazy in the second half,” Beilein said after the game. “We played through him the whole second half. That was something we saw from the game and we just went with him, knowing that they were going to deny Nik as much as they could, and they switched a lot of screens on Nik as well. We went in a different direction and it worked. Unfortunately, we’d already buried ourselves in a hole.”

LeVert and Stauskas have similar games. Thus, Michigan uses the two of them in similar ways — mostly through ball screens. One of Michigan’s bigs sets a screen, and LeVert and Stauskas are given freedom to create from there, similar to how Trey Burke was used last season. The way Duke was guarding Stauskas was completely different from the way they guarded every other Wolverine in their man defense — just look at the softer hedge from the second play in this clip, or the two wide-open dunks in a row he got in the second half — and LeVert was able to find openings in pick-and-roll and one-on-one situations.

It would be great if Stauskas and LeVert could both play well consistently this season, and perhaps they will find a way to do that and Michigan’s offense will be fine. That’s certainly Beilein’s hope. The coach said Stauskas’s lack of production hurt, but was clearly pleased with the production he got from LeVert in the second half.

“Obviously we were missing Nik’s normal game. We just had trouble scoring points without him,” Beilein said. “In the second half we got it going a little bit. We changed the game plan and tried to play through Caris more, and that’s where we got the 47 points.”

LeVert’s production in the second half ended up being too little, too late against Duke, and Beilein would like to move away from relying on just one player for offensive production. On a team as talented as Michigan, this shouldn’t be difficult.