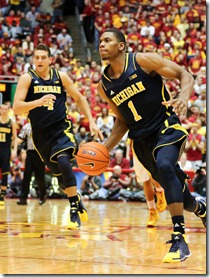 It’s no secret that the start of Michigan’s 2013-14 campaign has been disappointing. The Wolverines have already dropped three games and their two projected first-round draft picks have yet to find top-gear. (Photo: Dustin Johnston)

McGary missed time early on in the season with a back injury and is still rounding into form. McGary is averaging 9.3 points and 8.8 rebounds per game but hasn’t looked like the big man that dominated the NCAA tournament last season.

Robinson has struggled to display improvement to offensive game and is shooting just 25% from three-point range on the year. He hasn’t been aggressive offensively and his production has decreased without Trey Burke passing him the ball. His play appeared to hit rock bottom in a high profile game at Duke on Tuesday, totaling just 8 points in 34 minutes.

Sports Illustrated’s Chris Mannix updated his mock draft with Mitch McGary slotted at No. 18 and Glenn Robinson III at No. 20. He’s a bit more bullish on McGary’s chances of rising.

A lower-back injury kept McGary out for the first two games of Michigan’s season, and the rust of not playing clearly showed in the first month of play. But there are signs that McGary is shaking it off. He posted 14 points and 12 rebounds in an overtime win against Florida State last month and on Tuesday had a 15-point, 14-rebound effort in a loss to Duke. For now, McGary slips a little on the Big Board. But as he gets healthier, his production — and draft stock — should keep improving.

Mannix’s take on Robinson, is a bit more harsh.

Let’s not sugarcoat it: Robinson has been a big disappointment. Both his shooting and three-point percentages have plummeted and he has yet to surpass 15-points in a game this season. In a marquee game against Duke this week, Robinson totaled just eight points in 34 minutes. With Trey Burke and Tim Hardaway Jr. off to the NBA, Robinson was expected to produce more. He can’t afford another month like the last one.

Jeff Goodman spoke with NBA scouts in Durham on Tuesday and they weren’t impressed with Robinson’s play either.

Several NBA guys I talked to in attendance for Michigan-Duke were obviously disappointed in Glenn Robinson III's lack of assertiveness.

Adam Zagoria’s discussions with scouts yield similar results: Robinson is slipping but McGary should still be in the top-20 range.

Talked to a few NBA execs/scouts today who all concur Glenn Robinson III's stock is dropping. They say McGary lottery to early 20s

There are still plenty of games to be played. At this time last year, people were just starting to even mention Robinson as a potential pro and McGary wasn’t on the radar. Four months later and they were considered likely lottery picks.

Draft Express’s mock draft was last updated on November 26th and slots Robinson at No. 17, McGary at No. 20 with Nik Stauskas sneaking in at the fourth pick of the second round. Stauskas has started to receive increased NBA Draft buzz after racking up large scoring totals early in the season.

Stauskas was also mentioned in Chad Ford’s latest big board as a potential first round pick. The 6-foot-6 Canadian, like most of his teammates, had a disappointing performance in Durham, failing to make a shot from the field.