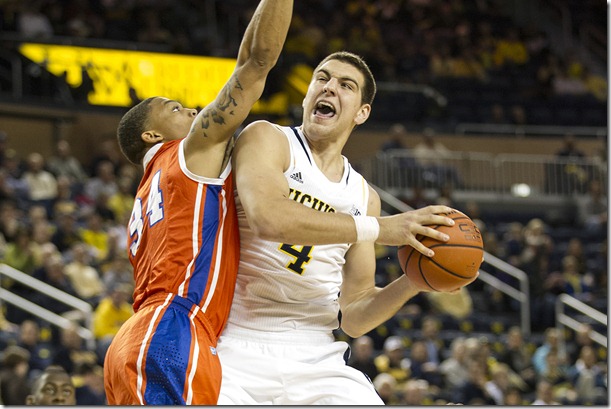 After a dismal offensive performance at Cameron Indoor Stadium on Tuesday, the last few days have been filled with questions about Michigan’s offense. Who can score the ball if Nik Stauskas struggles? What’s wrong with Mitch McGary and Glenn Robinson III? Can Derrick Walton lead the offense?

Those questions aren’t going to be answered in one game, especially against Houston Baptist, but the Wolverines showed they are more than capable of scoring on Saturday afternoon. John Beilein’s group tallied 107 points in 66 offensive possessions, setting a Michigan record offensive efficiency in the Ken Pomeroy era (2003-13) at 1.62 points per trip.

Michigan’s offense was prolific in the first half, scoring a ridiculous 1.93 points per trip, and slowed down a bit in the second half but still finished with its best offensive mark of the KenPom era. Michigan also shot the ball extremely well, tying a program record for made threes in a game at 16. The Wolverines shot 67% on twos and 62% on threes for a 79% effective field goal percentage – another KenPom era record. Michigan’s offense appeared a bit disjointed in the second half but that was probably due to the high number of free throws, the Wolverines attempted 20 free throws to 22 FGAs, and a few more turnovers (U-M had 18 turnovers to 1 assist in the first and 8 assists to 6 turnovers  in the second) but was still very efficient at 1.35 points per trip.

Houston Baptist mustered a heroic shooting performance during the first few moments of the first half, somehow keeping pace with the Wolverines early on despite Michigan’s offensive perfection. The Huskies made their first seven shots from the field, including three triples, but eventually the hot shooting dried up. From that point on, Houston Baptist shot just 16-of-52 (1-of-14 3-point) from the field for a 32% effective field goal percentage. The Huskies were never able to get to the line and turned the ball over often, especially in the second half, allowing Michigan to score 28 points off of 16 turnovers.

The major takeaway defensively was that Michigan’s ball screen defense still needs work. Houston Baptist’s smaller, quicker guards were able to split the hard hedge to get in the lane often. The hard hedge works defensively but the entire point of hedging is to eliminate that penetration. Splitting the hedge is a problem with execution rather than strategy and is a problem that would be fatal against better opponents.

It’s always better to play a great game against sub-standard competition than a mediocre one but attempting to extrapolate much from a 54 point drubbing, other than a nice confidence boost, is a bit foolish heading into next week’s tilt with Arizona. The Wildcats are likely to travel to Ann Arbor as the No. 1 team in the nation and have the most imposing frontcourt that Michigan will face this season.