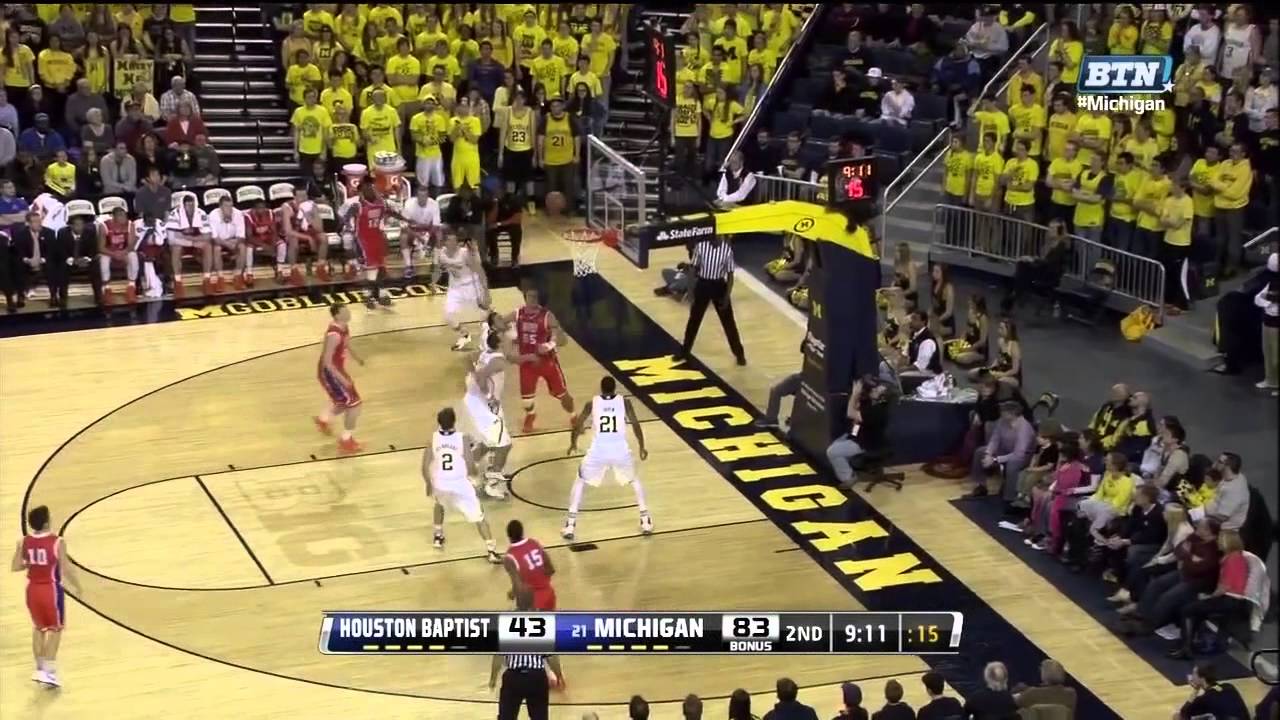 Michigan had a pretty easy time dispatching Houston Baptist at the Crisler Center on Saturday, beating the Huskies 107-53 in an offensive clinic. One of the main reasons Michigan was able to run away with the game was because its center, Mitch McGary, kept literally running away with the ball off of steals and defensive rebounds. McGary displayed plenty of point guard skills on Saturday, often starting and finishing the fast break all by himself. As McGary plays himself into game shape, it’s safe to say Michigan fans can expect more of this kind of performance. Why? Because these plays are the result of being active — both on defense and on the boards. On the first play, McGary simply plays great defense on a bad entry pass, anticipating the look and getting his hand on the ball without fouling. From there, he corrals the loose ball and takes it himself. While he did get fouled on the play, that was a four-on-two and there was likely a better play to be made in that situation. On the next play, McGary knocks the ball loose as Houston Baptist guard Caleb Crayton attempts some dribble penetration, takes it all the way downcourt before finding Nik Stauskas for the wide-open dunk when the two defenders collapse on McGary. The big man was overall very impressive on these plays, but the next play in this sequence was especially impressive because of the way McGary looked off the defender in a four-on-three situation, getting him to commit to Stauskas and leave Derrick Walton open in the corner for the 3-pointer. Following a made three by Zak Irvin, McGary again goes coast-to-coast and makes the tough lay-in for the 3-point play. McGary is an instigator for Michigan, and it appears he’s rounding into form just in time for the Wolverines, who have been struggling offensively thus far.

2) Houston Baptist shoots the lights out in the first half

Michigan’s offense scored a preposterous 1.93 points per possession in the opening frame and looked unstoppable. So the surprise when checking the scoreboard early in the first half wasn’t just the large amount of points but the fact that for a long stretch, Houston Baptist was keeping up. Nearly halfway through the first half, the Huskies were a mere three points down, thanks largely to a barrage of made 3-pointers. John Beilein said he saw a few possessions where Michigan’s defense wasn’t where he wanted it to be, and these early possessions were likely a few of those times. On the first play, Marcel Smith uses a ball screen to effectively confuse Derrick Walton, Glenn Robinson III and Caris LeVert. Walton gets utterly caught on the screen and Robinson switches, but leaves Smith when he thinks Walton has recovered. Unfortunately, Walton hadn’t quite recovered by that point and was not in front of Smith — this leads to Caris LeVert giving help, leaving his man, Tyler Russell open for the 3-pointer. Smith finds him, and Russell knocks it down. Mitch McGary does a good job with ball denial at the start of the next play, but the Huskies work the ball around to Smith. Smith drives around Nik Stauskas, and when Walton gives help, Houston Baptist center Ricmonds Vilde essentially takes him out with a hip check, leaving Russell open for another 3-pointer. Finally, Zak Irvin just gets caught in an off-ball screen and can’t recover in time to challenge, leaving the job for Stauskas.

Clearly, Jon Horford is the Michigan big man whom John Beilein feels the most comfortable with throwing the ball to in the post in isolation situations. Horford posted up a few times in the first half and Michigan either fed him or used his post-up in other ways. For the first play of this sequence, Michigan runs a set in which Zak Irvin must read Horford’s screen and decide which way to go off-ball. It looks as though he makes the wrong read by cutting back door — it seemed like his defender would have been caught out of position if he had popped out to the 3-point line. Anyway, his defender played it well and Irvin was covered. Horford gets the ball at the 3-point line off a pop of his own, but eventually works his way down to the block with the aid of an off-ball screen from Irvin. After receiving a great entry pass from Spike Albrecht, Horford makes a quick decision and a nice move, hitting the turnaround bank shot. Later, Horford takes a more conventional route to post-up position, setting a down screen for Irvin and establishing position. Irvin gets Horford the ball and the big man makes two strong dribbles then cashes a hook shot in the lane. Two very nice post moves by Horford. If he could become consistent with those, it would add a whole new dimension to the offense when he’s on the court. On the final play of this sequence, we see Horford posting up but no clear passing lane to get him the rock. So Irvin takes it into the lane himself through a dribble-drive, draws the attention of four Huskies, and kicks it out to an open Nik Stauskas in the corner. Beilein would like to bring Mitch McGary’s post-up game along to the point Horford is at, with a couple of good go-to moves, but it’s clear for now Horford has the green light on the block.

I just loved this play. It’s simple, but the ball movement is crisp and confident and Michigan’s guards open up opportunities for others through good ballhandling and penetration. This play is initiated by Nik Stauskas and the creative way he uses Jordan Morgan’s ball screen. Houston Baptist is still playing a 2-3 zone but their two guard positions attempt to trap Stauskas on Morgan’s ball screen. Stauskas throws over the top to Derrick Walton, and at that point the Huskies are on their heels and struggling to rotate properly. Walton sees an opening in the zone and knifes through two Houston Baptist defenders to get to the free throw line. This draws the defender responsible for Glenn Robinson III cutting baseline up just enough for Walton to rifle a no-look pass to the sophomore, who finishes at the rim for the 3-point play. This was a confident, heady play by Walton and it’s this sort of action that Robinson absolutely thrived in last season — hovering near the perimeter, cutting back door on the baseline, finding holes in the defense. This is what has been missing from Robinson’s game and something Beilein talked about during his press conference on Friday. The coaches need to continue to look for ways to get Robinson involved in the offense, and a good way to do that may just be finding similar sets as the ones he was successful in last year.

It was nice to see that toothy grin from Glenn Robinson III after slamming home the lob from Mitch McGary during the second play in this clip. Robinson has had a rough go thus far and regardless of the opponent it can sometimes be helpful for players to be reminded that basketball is really, really fun. One of the main reasons Michigan’s offense was so effective was because of its ability to get out on the fast break — and this was thanks to its defense. The Wolverine forced 16 turnovers, plays which resulted in 28 points. The first play features Caris LeVert knocking away a bad pass from Houston Baptist into the hands of Zak Irvin, who starts the break. Irvin gives it up to Spike Albrecht, who later tosses a lob right back, which Irvin finishes with ease. On the next play, Mitch McGary legitimately kicks the ball forward when Marcel Smith tried to dribble between two defenders on a ball screen. McGary and Robinson chase the ball all the way down to Michigan’s end, and McGary leaves the easy lob up for Robinson, who finishes. The lob itself was reminiscent of one of the coolest basketball photographs ever taken. On the final play before halftime, Michigan reaches 60 points in memorable fashion. Derrick Walton makes a terrific play, getting his hand on the ball and immediately turning upcourt. Stauskas ends up with the ball and tosses it ahead to Robinson, who finishes with a flourish. This game was over before Michigan stepped on the court, but it provided exactly what the Wolverines needed before their week of preparation for Arizona: a tune-up and a confidence boost.