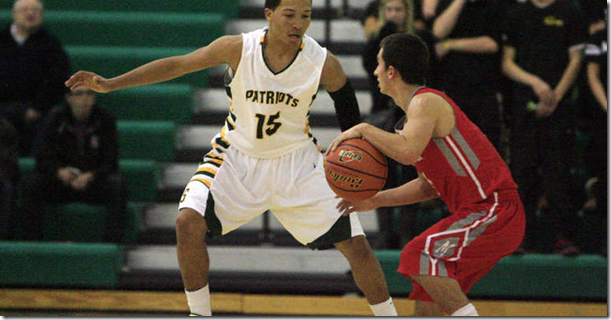 Kameron Chatman returned to the basketball court on Friday for his first organized high school basketball game in over two years.

Chatman, who sat out last season due to a transfer ruling at Long Beach Poly, scored 24 points and grabbed 14 rebounds in Columbia Christian’s season opening win over Madison.

Chatman had originally transferred to Long Beach Poly to play for his godfather, Sharrief Metoyer, but Metoyer was served a 1-year suspension for playing Chatman in Poly’s final game last season. Chatman transferred back to Oregon so that he can be with his family and play his final year of high school basketball at home.

The 6-foot-7 forward looks noticeably stronger in photos and video footage from the game. Oregon Live published this interview and highlight clip from Chatman’s debut.

DJ Wilson had six points in a 58-48 win over Modesto Christian.

Exum named Michigan in his top five earlier this summer but the superstar Australian guard is leaning toward entering the NBA Draft next season.

One of the nation’s best junior point guards, Brunson had 27 points on 11-of-21 shooting and knocking in five of his last six shots to lead Stevenson from a 70-56 win over Prospect.

Jalen Coleman had 16 points in a win over Midwest Elite Prep. Coleman’s La Lumiere squad has started the season 8-1 this year.

Luke Kennard had a triple double in his season opener, tallying 34 points, 12 rebounds and 10 assists on 12-of-20 shooting (5-10 3pt). Kennard has visited Kentucky five times since the Wildcats offered him a scholarship this summer.

Turner, now a member of the class of 2015, is settling in at New Hampton. The 6-foot-6 guard has been on the Michigan radar for quite some time and he’s still hearing from the Wolverines and a host of other schools. He updated his recruitment with CBS Sports’ Jeff Borzello:

“I’m working on just being an overall well-rounded player,” Turner said. “I’m most known for my shooting skills. But if I work on my ball-handling, defense, rebounding, running the floor, I’ll be a better player.”

Going from the class of 2014 to the class of 2015 only heightened the pursuit coming from different schools. Turner has offers from Boston College, Iowa State, Rhode Island, Penn, Princeton, and several Mid-American schools. Wisconsin, Gonzaga, Iowa, Michigan, Michigan State and Harvard are showing interest.

He said Wisconsin, Boston College, Iowa State and Penn are coming at him the hardest. Turner has taken trips to Iowa, Iowa State, Michigan and Michigan. He was supposed to visit Northwestern, but it didn’t happen. Upcoming visits could include Toledo and Penn.

Zimmerman faced off against Cliff Alexander and played fairly well, according to NY2LA Sports:

Zimmerman struggled with Cliff Alexander’s physicality at times but still showed flashes of his highly regarded potential in the loss.  Zimmerman had 10 points and 13 boards and was 4-13 from the field.  His lift looked like it was affected at times from an ankle injury but Zimmerman did look like he had put on muscle and he is still tremendously skilled.

Another class of 2015 target on the radar is Wisconsin big man Henry Ellenson. Ellenson racked up 22 points and 15 rebounds in a 58-29 win over Rice Lake High in his season opener.