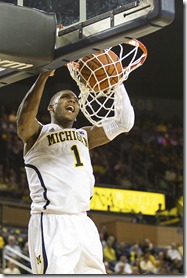 Michigan will be better in February and March than it is right now.

I’ve said that since the first couple games of the season and others agree. Dan Hanner writes,“If you are looking for a coach whose team typically does get better later in the year, look no further than Michigan head coach John Beilein.” Seth Davis thinks the Wolverines have the pieces to make another NCAA tournament run, even if it takes “some time to bake this cake.”

Michigan is the 17th youngest team in Division I basketball and while we can agree that its better days are ahead, it’s time to take a closer look at where the Wolverines need to improve. We start with the offense, where Michigan has been pretty good (ranked 33rd in adjusted offensive efficiency) but far from great – and a long way off from last year’s team which was the most efficient offense in the country.  (Photo: Scott Mapes)

1. Glenn Robinson III is not getting to the rim

Glenn Robinson III has been arguably Michigan’s most disappointing player through nine games. The 6-foot-6 sophomore hasn’t shown much in the way of new abilities or improvements and his offensive efficiency has (understandably) taken a step back without Trey Burke feeding him the ball. Robinson is averaging 12 points and five rebounds per game but he’s looked like a nice role player, not a lottery draft pick.

Looking at Robinson’s stats, one thing jumps off the page right away: he isn’t getting nearly as many looks around the rim as he did last season.

Last year Robinson attempted 43.5% of his field goals at the rim and converted at a 78% rate. You remember those plays: Trey Burke penetrates and finds Robinson creeping along the baseline for an alley-oop or Robinson leaks out for an easy dunk in transition. Robinson was among the best finishers in the country a year and was the 10th most efficient offensive player in the country because of it.

This year, just 21.4% of Robinson’s field goal attempts have come at the rim. He’s finishing at an improved 88.9% rate but the opportunities aren’t nearly as plentiful. That’s a major problem because that’s what Robinson does best.

Robinson’s jump shooting numbers have also taken a step back. A year ago he shot an impressive 48.9% on 2-point jumpers, that number has regressed to 35.3% in early season play. His 3-point stroke wasn’t necessarily consistent last season but has fallen to 28.1%, down from 32.4% a season ago.

2. Michigan doesn’t get to the rim

I picked out Robinson specifically because he’s shown substantial individual regression but this is a team wide problem. Michigan is attempting about 5% fewer shots at the rim this season at 22.9%. That’s the fifth lowest ratio of shots at the rim in Division I and means that the Wolverines are essentially a jump-shooting team.

That’s not the end of the world. Last year’s group attempted 27.7% of its shots at the rim, still a very low ratio, but if you are going to shoot a lot of jump shots then you need to be a good jump-shooting team. Results are mixed for the Wolverines in that department.

Last year’s team ranked 2nd in efficiency at the rim, 25th in two point jumpers, and 17th in 3-point jumpers. That group was the most efficient offense in the country, so Michigan isn’t going to match their production but there’s obviously room for improvement.

3. Derrick Walton’s assists aren’t coming in the half court

Derrick Walton has 27 assists this season and only 18 of them have come in half court situations. That’s just two half court assists per game for Michigan’s young floor general and a big reason that Michigan isn’t getting nearly as many looks at the bucket.

Of Walton’s 27 assists (including transition), six were for attempts at the rim, 10 were 2-point jumpers and 11 were 3-point makes.

Similar stats weren’t available at hoop-math for last season but it’s safe to assume that Trey Burke had assisted more than six dunks and layups through nine games a year ago. He probably had single games where he assisted six dunks. Walton’s inability to create easy looks for his teammates at the rim is a big reason that the Wolverines haven’t been as effective scoring at the bucket this season.

His teammates haven’t been much better. Caris LeVert (10 of 22 assists) and Nik Stauskas (11 of 26 assists) lead the Wolverines in assists at the rim this season while Stauskas (20 of 26 assists) and Spike Albrecht (20 of 25 assists in about a third-fewer minutes) lead Michigan in half court assists.

Again, we don’t have Trey Burke’s numbers to compare but the inability to create baskets for others in the halfcourt is a serious problem.

4. Michigan is a terrible isolation team

Isolation offense has never been the bread and butter of John Beilein’s offense but Michigan’s offensive efficiency in isolation situations is putrid. The Wolverines have scored just 9 points on 26 isolation possessions: .346 points per possession (2nd percentile nationally).

A year ago the Wolverines scored .825 points per isolation possession (80th percentile) but relied heavily on Trey Burke and Tim Hardaway Jr., who accounted for well over half of their isolation production.

Isolation offense isn’t at the top of the concern list but it gets back to the point that Michigan doesn’t have a lot of weapons that can create something from nothing. Against Duke, Caris Levert was the only Wolverine to demonstrate that ability.

5. Michigan’s offense is balanced, but is that a strength or a weakness?

Under John Beilein, Michigan has generally had two players that use at least 24% of its offensive possessions. Typically that would be one player in the 24-28% range (“significant contributor” per KenPom) and another in the 28% or more range (“go-to guy” per KenPom). Under that distribution, everyone knows their role.

Under Michigan’s current distribution, no one is quite sure. That provides a certain degree of versatility but it also provides a lot of questions that are difficult to answer. There are probably plenty of teams that have been successful without a prototypical go-to guy, but Michigan’s lack of a primary scorer illustrates its biggest weakness.

The Wolverines need an identity.