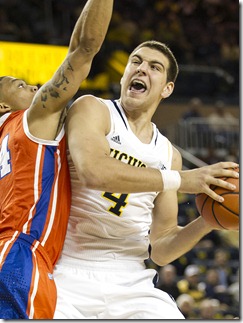 Michigan didn’t lose its third game until February last season but this year hasn’t gotten off to the same start. What are three or four of the biggest issues that you see with this team?

First off last year was an aberration. As much as you want to compare, it’s not fair to this team to compare them with a Final Four team and a team that was the last remaining unbeaten. Those years don’t happen that often and it takes a lot of luck to go with. Second, their schedule has been absolutely brutal. We didn’t play a real road game against a high major team until January; they just finished playing in two of the toughest venues in all of college basketball. They lost two first round picks, not easy to replace that production and still be efficient doing so.

With all that being said, a lot of the issues just come with guys getting comfortable in new roles. The talent on this time is still elite level, but there is a huge difference from being a third and fourth option to being a first and second option.

Nik has made that leap, Glenn is still figuring out where his shots will come from and Mitch is working his way back into shape. Remember Mitch was out for a long time, he is such a skilled player, but he has to develop that touch again from missing so many practices. There is a huge difference scoring 12 points off someone else’s penetration and then playing off that closeout and having to create from a standstill. All those guys benefited from playing off Trey’s and Tim’s penetration and then attacking, this year they are the ones having to make that penetration. A huge and very difficult difference. We always say the hardest thing to do in basketball defensively is closeout because guys are just so athletic. When you can guard someone from a standstill it makes your job much easier. Those three guys along with Caris are learning how to efficiently use the offense and find spaces to score and make plays for others.

Glenn Robinson III has struggled early on to find a role within Michigan’s offense this year. What do you see from Glenn and how can he fix things?

Glenn will be fine. He is a guy who is most effective in space and in movement to score. Giving him the ball at the top of the key and saying go is not what Glenn is best at. How many times last year did Glenn make a great cut for a basket or come off a screen and attack the basket? He is great in closeout basketball because he has such a great first step and can rise up over everyone for that pull-up. Right now teams are saying don’t help a ton off him because if we don’t give Glenn space to score he will have a tough time creating it. He will develop this over time, but Glenn has to just get back to being in constant motion. Be a guy who wreaks havoc on the backboards, is a blur in transition and is in constant attack mode on offense. He can change a game in so many ways besides just scoring. As a matter of fact, what makes Glenn so good is he can dominate without really scoring a lot. Glenn can be the best defender and rebounder in a game every time out. Right now Glenn is being too hard on himself to be just a scorer when his gift is everything else he can bring to a game.

Derrick Walton obviously had big shoes to fill, what has impressed you the most with his game and where does he need to improve?

Derrick has been really good for the most part. Everything he does gets compared to Trey Burke which obviously isn’t fair, but his vision and court sense is elite for a freshman. Coach B puts so much responsibility on a point guard, Michigan runs so many sets and with Derrick having the ball in his hands a lot, there is a big trust factor there. I think going forward Derrick has to continue to shoot a high percentage from three. They are going to run a ton of offense through Nik and Caris which means Derrick will be in a corner to catch and shoot. His ability to space the court and knock down corner three’s will be really important. I know Coach B is going to make him cut down the turnovers. His assist to turnover ratio has to be better and Michigan stresses maybe more than anything taking care of the ball. The number one thing that will get you out of the lineup is turnovers.

Also I think Derrick is going to have to be a bulldog on defense. I think he will benefit a little bit that unlike Trey, he doesn’t need to make a play every time down the court. Trey would be so gassed on defense because of how hard he had to work on offense. There are so many great point guards and the ability to contain them and not let them break you down and rotate all over the court is the key to a good defense. Michigan wants teams to take toughs two’s, the key to that is not allowing penetration and Derrick’s ability to guard will be vital.

First of all Mitch is almost averaging a double-double in 25 minutes. Those numbers will continue to go up. With Mitch, the first thing is he should and will average a double-double without a play being called for him. When you have a motor like his and are extremely skilled, as a big guy you can take over a game without a play being called for you. Look at the NBA these days, how many centers honestly get constant post ups to score? Brook Lopez, Dwight Howard somewhat, Hibbert a little, the game has become so centered around the pick and roll. Center’s need to be able to run and defend pick and rolls, protect the rim and score on drop offs for the most part.

With that being said, Mitch is not your typical center and Michigan’s competitive advantage probably starts with number 4. I do agree they need to get him the ball more and trust me the coaches are thinking of actions to get him the ball down there. Remember they couldn’t run any of this stuff all pre-season because Mitch wasn’t practicing. I would get the ball to Mitch on the right block and let him work his way to the middle. He has great ball fakes and footwork that will make teams double. The other thing is the wings need to get more comfortable getting the ball into the post. For whatever reason, the college game is way harder to get the ball inside than the NBA. All these pick and rolls, Mitch is open on a little jump pass that Trey used so well against Kansas. Mitch is open more than he gets the ball, but the wings have to hit him on those rolls.

Duke shut down Michigan’s offense by negating Nik Stauskas. How can Nik fight against that sort of effort? What can Michigan do to adjust and what will stop other opponents from employing a similar strategy.

Great question because I think teams will use this strategy a lot. There are three things you can do to get Nik the ball against heavy pressure. The easiest, if you know you want to run a pick and roll with Nik at the top of the key, let him bring the ball up the court. As simple as that sounds, they aren’t denying him in the full court, so just keep the ball in his hands. You obviously can’t do that all game long, so the next thing is use Nik as a screener. I would have Nik set a ton of back-screens for Mitch and Michigan has actions for this. If Nik’s man is so consumed with Nik and doesn’t help on the back-screen, Mitch will be wide open. You have to show for a second on a back-screen as a defender or you will get burned. Lastly, I would run Nik off a ton of screens himself. Nik is too good to just play 5 on 4 without him. If good solid screens are set for Nik and he uses them correctly he will get open and his defender will get worn down. Simple curl actions where Nik uses his size will work when getting denied. When a team does this again, Michigan will have a game plan designed just for it.

Michigan vs. Arizona. What are your keys to a Michigan victory?

I have not watched Arizona play this year besides for a couple of possessions here and there. From looking at their numbers, you better get back in transition. This means no live ball turnovers that allow them to attack in advantage situations, but also getting back after misses. The center matchup will be huge. Mitch vs. Aaron Gordon will be one all NBA scouts are watching. Mitch will be as excited as you can be and the winner of this matchup will go a long way in determining who wins. Lastly and as dumb at this sounds, Michigan is going to have to make shots and especially their three balls. Teams ranked number 1 have an incredible amount of talent, you have to match that level and make shots. Michigan takes a ton of threes and when they hit at a high percentage they can be hard to beat. Make no mistake Michigan can easily win this game, but it is going to take a big time team effort.