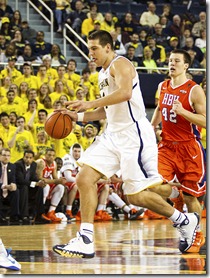 Michigan’s dropoff in offensive production since last year has been one of the main themes of the young season, especially coming off sub-par offensive performances against Charlotte and Duke. While the losses of Trey Burke and Tim Hardaway Jr. explain much of the issue, the remaining talent on the roster indicates that the Wolverines could be underperforming on the offensive end.

John Beilein was on the Michigan Insider on WTKA Wednesday morning and he addressed some of the perceptions regarding the team’s offensive capability. Of particular interest is Mitch McGary, a player whose seemingly endless potential could jump-start Michigan’s half-court offense if more action could be run through him in the high post.

Beilein acknowledged that getting McGary more involved has been a goal of his this season, referencing past seasons in which the big man has been the facilitator in his offense.

“We’ve used the big man as a facilitator almost forever, for the last 25 years,” Beilein said. “The reason being, many times the other five man is not a superior perimeter defender. As a result, it’s a pressure release to have the big guy step out and get the ball, and you can play through the big man. I once had a center, now he was only 6-foot-6 but he was a true center at Le Moyne have 170 assists. To put that in perspective, Trey Burke had 240 last year. So 170 assists at the center position, that’s where their weakest defender will be. So you can do that as a pressure release. (McGary) is certainly doing better. Last year at this time, he had three assists, this year he has 12. He is slowly getting to understand how to make those decisions when you play through your big man in the high post.”

While there has been a minor clamor to dump the ball into the low post to McGary, it seems the big man is more suited for the high post given the diversity of his skill set and his passing ability. Not only that, but McGary hasn’t proven himself consistently capable of scoring one-on-one on the block in isolation situations.

However, this doesn’t mean Beilein and the rest of the coaching staff have completely abandoned incorporating the low post into their offense.

“I think everyone should stay tuned to that (working the ball through the low post) because that’s been a process that has sometimes been frustrating, sometimes we stay away from it and sometimes it’s been good to us,” Beilein said. “There are very few teams that play through the low post, but some that do are very very effective. So everybody should stay tuned. We’re a work in progress and we’ll continue to just see what we do well.”

As we illuminated in Tuesday’s post about Michigan’s offensive troubles, Glenn Robinson III is not getting to the rim at the rate he did last year. Last season, 43.5 percent of his looks came at the time. This season, that percentage has fallen to 21.4. Many of Robinson’s looks at the rim last year came off back-door cuts and alley-oops, while this season Robinson must rely more on the dribble drive to get inside shots.

John Beilein said there is a simple explanation for Robinson’s lack of interior productivity: the sophomore just isn’t hitting shots.

“He’s taken more shots than he took last year at this time. The only stat that is down from last year are the percentages and his rebounding. He knows that and he’s going to work harder at just getting to the glass to get rebounds here and there,” Beilein said. “It’s really simple: he hasn’t made shots. He’s taken open shots and they haven’t gone down. So as a result, people play off him, take some of his basket drives away, and he’s working through all those things. He’s one of our hardest workers in practice. Stay tuned on that one, too. He’s just going to keep working.”

While Robinson has struggled a bit this season, a player who has come on in recent games is freshman Zak Irvin. Irvin is averaging 14.3 points per game coming off the bench over Michigan’s last three games; the number is a bit skewed because two of those three games were against Coppin State and Houston Baptist, but it still indicates a growing confidence.

“His percentages have just really climbed in the last three or four games and it’s for one basic reason: he’s had better shot selection,” Beilein said. “I think I might have said this on the program, but he has that Tim Hardaway aspect where he can get his own shot. It’s not the same. Tim used to jump over everybody. Zak doesn’t jump over everybody, he just has a unique delivery that’s so quick people can’t get to it. But at the same time, don’t let that be a weakness. Don’t take shots that really have little chance of going in. So he’s been really selective with his shots and now he’s shooting almost 30 percent or around 30 percent from three. He’s a really good defender. It’s really good to have someone who can come off the bench, take his warm-up off and hit a shot the first time he touches the ball. That’s not as easy as people think. He’s got that ability and obviously we love bringing him off the bench.”

Arizona’s backcourt is the key to Wildcats’ success

There will obviously be more in-depth previews regarding Michigan’s game on Saturday against Arizona at the Crisler Center, but John Beilein offered a few words on his initial impression of the Wildcats.

“First of all, they’ve got a veteran backcourt. Really, all of those are big names,” Beilein said. “(TJ) McConnell has been key for them right now. Here we’ve got a guy who was at Duquesne, great skill guy. He’s an Aaron Craft type of player who played at Duquesne, was their best player, transferred, sat out a year, worked at his game, so now he’s a fourth-year guy so he will be running their team. tremendous player. And then him and (Nick) Johnson in the backcourt. Johnson is a Tim Hardaway-type of player. He’s not as big as Tim but he can really shoot, he can take the ball to the basket, he defends, he does a lot of good things. That backcourt of a third and fourth-year guy is what’s making them really go right now. Because their frontline is really young. They do good things. They offensive rebound 41 percent of the missed shots, they have a long, good team with multiple push men. They stretch the floor really well. I think the backcourt is really what’s made them special so far this year. It’ll be a challenge for us, but it’s going to be a great, great event, it’s going to be a great opportunity for us to get a quality win and I know Crisler will be jacked up on Saturday.”

Arizona’s frontcourt is plenty talented as well with Aaron Gordon, Kaleb Tarczewski and Brandon Ashley but stopping the Wildcat backcourt could be the first step toward an upset on Saturday.