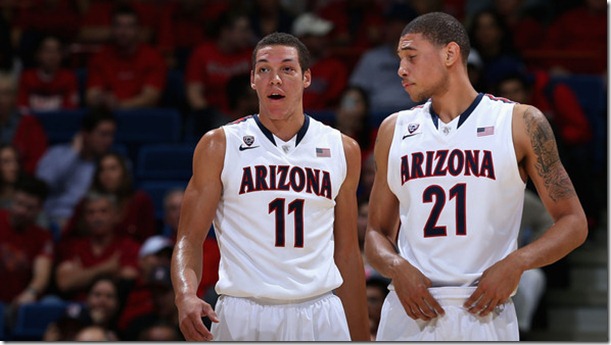 Adam Butler of Pac Hoops blogs about Pac-12 basketball with a focus on the Arizona Wildcats. Butler took the time to answer a few questions about the Wildcats before Saturday’s big game in Ann Arbor. We discuss what makes No. 1 Arizona so deadly and what some of the keys are for Michigan to knock off the Wildcats.

Defense and rebounding appear to be what makes Arizona elite. What has allowed a fairly average defense a year ago to defend the rim so well this year?

As my old baseball coach used to say, “Everything stems from the hill.” Which is to say that the man with the ball (point guard in basketball terms) sets the team’s tone. So when TJ McConnell became the primary ball handler of Sean Miller’s team, the defensive tone of this group changed. There’s been some roster turnover that has lent itself to defensive success but I’d really like to give McConnell a lot of credit here. With regards to the rim, this team has length for days and the defensive fingerprint is such that Arizona already limits shots at the rim (just 19.6% of shots against them are at the rim). And then they start seven-feet, six-nine, six-eight, with Nick Johnson who can jump out of the gym and Rondae Hollis-Jefferson’s 7’2” wingspan off the bench. No easy buckets.

Aaron Gordon is a likely top-10 pick next year. What makes him special and where does he excel?

While ESPN and other syndications want to make this the year of the freshman and perhaps rightfully so, Gordon is different than the Parkers, Wiggins, and Randles of the NCAA. He’s not nearly as polished but he doesn’t stop. He goes and goes and when your projected lottery pick calls himself a “glue guy” you know you have someone special. He’s arguably the most athletic of that bunch but we don’t need to compare him. He’s definitively unique in that he excels as the glue guy. He leads the team in put backs and the glass. People love to toss around the word “motor” and, well watch for yourself and let me know what you think.

John Beilein has raved about Arizona’s backcourt as much as its frontcourt, who do Michigan fans need to be familiar with in the backcourt?

That’s where Arizona’s maturity is. Between three year starter, Nick Johnson, and junior TJ McConnell – who is in his fourth year in college – this backcourt plays just a shade under all of the minutes. Miller’s had the opportunity to sit these guys but when push comes to shove (say…Duke in Madison Square Garden where TJ and Nick played 39 and 31 minutes respectively) they are going to be central to whatever Arizona does. I think Johnson is the best player on this team, but TJ is the most important.

Arizona’s offense appears to be its Achilles’ heel as the Wildcats have struggled a bit offensively against Drexel, Duke and UNLV. What causes the offensive hiccups for Arizona?

Early on, like before games were played, everyone wanted to talk about Arizona’s inability to shoot the ball. To date, that hasn’t necessarily been the problem for the Wildcats. They’ve hit 37.6% of their threes which they’ve limited to just 28% of their offense. Perimeter shooting hasn’t really been the issue. The problem – particularly in those games you listed – has been the turnover bug. In those games, Arizona had 14, 16, and 14 respectively and certainly in the bookends of those stats, there was a stiff amount of turnovers in a single half; a half that not coincidentally coincided with outrageous shooting. That said, I still think the Wildcats are susceptible to a zone or a defense that forces them to get away from all that size and ability to score around the rim.

Pretend you are coaching against Arizona, what are the top three items on your game plan?

How do you see Saturday’s game playing out and who is Arizona’s x-factor?

I see this being a very difficult game for the Wildcats. The Wolverines shoot the ball very well and garner the missed shots well, too. With regards to the rebounding, Arizona is the 11th best team at grabbing O-boards while UM is the 13th best at not letting O-boards get grabbed. I really think that could be the crux of the matter in this matchup. If Michigan can hang with the Wildcats on the glass, limiting their extra possessions while hitting from the perimeter, it could wind up being a long afternoon for the Wildcats. The X-factor in all of this is Rondae Hollis-Jefferson. He did this and has the ability to guard up and down a lineup and has a nose for the rim.

What’s Arizona’s ceiling? Who is most likely to determine how far the Wildcats go?

Arizona can reach their ceiling atop a Werner ladder in Dallas. That’s how good, dynamic, and skilled this team is. One of the things I like the most about this team is that they are wildly balanced. Any given guy can beat you but collectively they’re going to come together to defend their basket as well as any team in the country. But if we’re looking to point fingers, the single guy that will determine how far they go is going to be TJ McConnell. He left Duquesne to play for bigger moments and thus far he’s lived up to that desire. Against Duke, the junior point guard scored 10 points, grabbed 6 boards, and assisted 8 more baskets. He played 39 minutes and Arizona needed all of that tick. Then, in their next tightest contest, McConnell had two huge baskets and assists down the clutch stretch against UNLV. He’d finish that game with 13/7/6. There are a lot of very good players in the cardinal and navy, but McConnell makes them go.