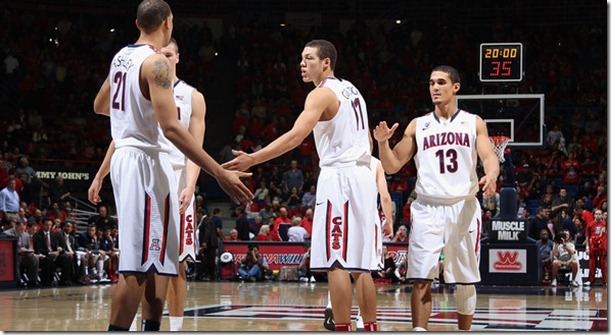 Michigan has played in some big games this year but they’ve all taken place far from the friendly confines of the Crisler Center. With just a couple weeks until the Big Ten season, the Wolverines finally get to host a marquee opponent in No. 1 Arizona.

The Wildcats weren’t as hyped as Kentucky, Michigan State or Duke in the preseason but they boast a one-and-done lottery pick, plenty of supporting talent, ridiculous length and the No. 1 ranking. Sean Miller’s group has already beaten Duke and Drexel on neutral floors and won at San Diego State this season.

Michigan has had a week to prep for the Wildcats and is badly in need of a win after dropping three of its first nine games. Arizona won at New Mexico State on Wednesday and will travel to Ann Arbor Friday afternoon with Saturday’s noon tip-off equivalent to a 10 a.m. start in Tucson. That should provide a slight advantage to the Wolverines, who haven’t gone more than five days without a game all season before this week.

Arizona’s statistical profile reminds me a bit of a vintage Tom Izzo Michigan State team. The Wildcats are dominant on both backboards, rebounding 41% of their own misses (12th) and 76% of their opponents’ (8th). Dominant rebounding sets the tone for Sean Miller’s team but is far from their only strength.

Offensively, Arizona is solid and relies on scoring around the basket but isn’t immune from the occasional turnover. The Wildcats shoot 55% inside the arc (29th) and 37.7% outside the arc (67th) but attempt just 27.3% of their field goals from long range. The Wildcats shoot 30% on two-point jumpers and 38% on three-point jumpers and are obviously much more effective when they gets to the rim where they shoot 76%. Arizona gives the ball away on 18.7% of it possessions (186th) and gave the ball away at least once every five trips in its three closest victories (Duke, Drexel and UNLV).

Defensively, the Wildcats have the nation’s fourth best eFG% defense, surrendering just a 40.4% effective field goal percentage. With great shooting defense and great defensive rebounding, it should come as no surprise that the Wildcats are the fifth best efficient defense in the country to this point. The one thing Arizona doesn’t do much of is force turnovers, but that appears to be by design as Sean Miller’s teams rarely force turnovers. Cal Poly was the only team to surpass a point per possession against the Wildcats this season and accomplished that in the first game of the year.

The size of Arizona’s big men is the first thing you notice when you look at the roster. Aaron Gordon is projected as a top-ten pick next year and has the athleticism to back up his lofty rankings but he also has help. Gordon wants to play on the wing, and has some skills in the open court, but his offensive game appears to be a work in progress.

The 6-foot-8 freshman averages 12 points and 8.5 rebounds per game while starting at the three position and is an impact defender and rebounder. His Achilles’ heel right now is at the free throw line where he’s just 21-of-47 on the season. Offensively, he’s active but not the most efficient player. His offensive numbers aren’t bad but they aren’t really spectacular either.

Gordon isn’t a great scorer with his back to the basket, he’s only posted up 10 times this season and scored six points. He’s had just a handful of perimeter isolation plays and he’s not a great shooter: 6-of-37 on two-point jumpers and 6-of-16 on three-point jumpers. The bulk of his offensive production comes in transition, on the offensive glass and cutting to the basket – but even then he’s not the most efficient finisher.

Gordon is still a match-up nightmare for Michigan as a three (he would even be a lot for Robinson to handle at the four). However, I suspect that Duke is the only other team that Arizona has played with a 6-foot-8 three-man to match Gordon’s size and he still hasn’t consistently taken advantage of those matchups.

Gordon is joined in the frontcourt by Kaleb Tarczewski, a 7-foot, 235 pound sophomore that attended prep school with Nik Stauskas at St. Mark’s, and 6-foot-8 sophomore Brandon Ashley. Tarczewski, Ashley and Gordon are all nationally ranked in both offensive and defensive rebounding percentages while Gordon and Tarczewski are the best shot blockers in the rotation. The threat that all three players provide on the glass will be a huge issue for Michigan’s defense.

Tarczewski is a more traditional back-to-basket big man and rim protector, 49% of his offensive possessions are post ups and he scores .82 points per post-up (43rd percentile). He gives the ball away almost once every three post-ups, so double teaming him appears to be the right move.

Ashley is the dynamic scorer that jumps off the page when you skim Arizona’s Synergy Sports scouting report. 19% of Ashley’s offensive possessions come in the low post and he’s Arizona’s most effective option on the low-block (22 points on 19 post-ups), he’s an effective isolation driver against opposing four men (20 points on 15 poss.), he’s Arizona’s best pick-and-roll man (23 points on 15 PNR catches) and he’s even shown the ability to hit the three when left open (7-of-12 on the season). Sean Miller estimated the Ashley has a 7-foot-4 wingspan and he’ll be a load for Michigan to deal with at the four position.

Most teams that have great bigs still need their guards to excel and Arizona is no exception. Nick Johnson leads the Wildcats in scoring and uses a quarter of their offensive possessions. Johnson is an athletic off-guard that excels attacking the basket (61% 2-point shooting, 46% free throw rate) but is also an above-average perimeter shooter (36%). He uses a fair amount of ball screens but he’s at his best off of screens and dribble hand offs and is devastating in transition.

Duquesne transfer T.J. McConnell is the glue that holds everything together for the Wildcats. He has a 37.5% assist rate and is an effective shooter inside (56%) and outside (33%) for a 54 eFG% even though he’s more likely to distribute than shoot. McConnell uses the ball screen often and is better passing than scoring when using the high screen.

The Wildcats play a short bench as 6-foot-7 forward Rondae Hollis-Jefferson and 6-foot-3 guard Gabe York are the only reserves to average double-digit minutes. York is a knock down perimeter shooter, over half of his field goal attempts come from long range and shoots 40% from distance (he’s just 3-of-15 in the last five games) . Hollis-Jefferson is a five-star freshman forward that’s aggressive on the offensive glass (12.2% offensive rebounding rate) and attacks the rim (91% free throw rate, 60% 2-point shooting). He does things like this, but isn’t much of a shooting threat.

Force small ball. The match-ups in this game will be interesting. Arizona wants to play big (6-foot-8, 6-foot-9, 7-foot) while Michigan wants to play small (6-foot-6, 6-foot-6, 6-foot-10). Usually Michigan’s stretched offense forces opponents to match its smaller lineup but Arizona has some uniquely talented players at the three and four in Gordon and Ashley. I suspect that the Wildcats will try to stick to their guns and force Michigan to guard them. Whichever team has to switch from its preferred lineup will probably be playing from behind. Forcing the Wildcats to defend the perimeter will be the top priority offensively as Michigan spread the floor.

Defensive weak links. Johnson and Ashley are two of the more versatile scoring options on Arizona’s roster but the Synergy numbers say they are the weakest links defensively. Johnson (.87 PPP allowed, 48th percentile) has been tested the most often and struggles defending screens both on the ball and off. Michigan doesn’t really have a weapon to exploit Ashley’s inconsistencies defensively (.926 PPP, 37th percentile) – other than some baseline cuts from Glenn Robinson III – but Johnson could be a different story. Whether Johnson is matched on Caris LeVert or Nik Stauskas, the Wolverines need to test him on the defensive end.

Get over the ‘wow’ factor. Michigan has faced a bigger team (Florida State), a more skilled team (Duke) and a better shooting team (Iowa State). The Wildcats are still the best defensive team, and probably the most athletic team, that the Wolverines have faced this season. Michigan’s ability to settle down and play its game defensively against Arizona’s length and athleticism will be critical. In short, don’t start the game like this.

The 1-3-1 zone lottery. On paper, Arizona looks like the type of team susceptible to struggling against a zone defense. The Wildcats have a lot of length, struggle with turnovers at times and are a good but not great shooting team. However, the Wildcats have played well against zone this year (1.109 PPP vs. zone; .91 PPP vs. man) and Michigan’s zone defense hasn’t been good. I’m sure John Beilein will have the 1-3-1 zone ready but it seems like a desperation play. Given Arizona’s offensive rebounding abilities, don’t expect to see the zone unless Michigan is struggling and needs to change the dynamic of the game.

Ken Pomeroy projects a 66-65 win for the Wolverines, giving Michigan a 54% shot at knocking off the Wildcats on Saturday afternoon. The importance of this game can’t be overstated. A win has the potential to rescue Michigan’s non-conference schedule while a loss leaves the Wolverines with their backs to the walls headed to Barclays and into the Big Ten season. Right now Michigan has a disappointing loss and two ‘good losses’ but it doesn’t have a big win. Arizona would be that victory.