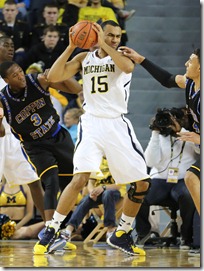 On Saturday, Michigan will welcome No. 1 Arizona to the Crisler Center. As is obvious with any top teams, the Wildcats have many strengths and few weaknesses. One strength of particular concern to Michigan is Arizona’s ability to clean the offensive glass.

The Wildcats rebound 42.7 percent of their misses, and with an effective field goal percentage of just over 54 percent, they don’t miss much.

The Wildcats are simply an outstanding rebounding team, on both ends of the floor, which is why rebounding is a particular focus for the Michigan coaching staff leading up to their noon matchup on Saturday.

“(Rebounding) is really going to be important,” John Beilein said during a press conference on Friday. “That is a huge part of this game. In their offense, they’re really taking good shots, as well. So they’re going to bleed you, take a really good shot and if they miss it they’re going to bleed you again until they get another really good shot. So it’s really important that you get their possessions one at a time and try to run when you can get a stop.” (Photo: Dustin Johnston)

The advantage good defensive rebounding presents for Michigan is obvious: it allows the Wolverines to get out on the fast break. Against a team with the fifth-best defense in the country, not allowing Arizona to get set will be crucial for Michigan’s offense.

Beilein emphasized that cleaning the defensive glass will be important to that effort.

“You’ve got to score, that’s the issue,” Beilein said. “(Arizona’s) numbers would show mixed results on that. People aren’t running on them because they only get the ball out of the net and not off the backboard. We have to find a way to get stops so we can get the ball off the backboard. That’s a big issue. Our defense is going to the key to our offense. It will be so much about field position because it’s a strength of ours. A strength of ours if defensive rebounding and a strength of theirs is offensive rebounding. 42 percent. They don’t miss many, but when they do they get 42 percent (of potential offensive rebounds). We’ve got to really do a great job of boxing out as well.”

John Beilein doesn’t break out the sticks often, but when he does, Michigan knows it will be going up against a team with length.

The Wolverine coaching staff occasionally uses long sticks that simulate the height and length of especially long defenders closing out to prepare its players in 3-point shooting drills during practice.

“From time to time we’ll do (use the sticks),” Beilein said. “I’d say five or six times a year. We will do it if we’re playing a team that has multiple guys who can go close out on you. We probably should do it more.”

Arizona is a team that commands special preparation. With their length on the perimeter, the Wildcats are forcing teams to shoot a dismal 27 percent from beyond the 3-point line. For Michigan, a team that takes over 40 percent of its shots from deep, being able to rise up and hit 3-pointers against Arizona’s length will be crucial on Saturday. Hence the sticks.

“I think they’ve all bought in to playing defense and they have tremendous length in their gaps,” Beilein said. “So you’re going to see them in a gap defense, very much like Ohio State plays. Craft is very much like McConnell. But their length at the other positions allows their gaps — they can help and recover out of those gaps. If you think you’re open for a three, all of a sudden (you aren’t). We’re practicing with these long sticks all day today because they can close out and get there. They’ve got great length and great quickness as well. And now you have a shot-blocker.”

After a season that saw few injuries last year, Michigan has already suffered its share of injuries in this young campaign. Nik Stauskas was out for a game with a bad ankle, Mitch McGary was out for the entire fall with a bad back, and there have certainly been a few more bumps and bruises along the way.

Of particular concern for the coaches is the possibility of injury to McGary because of the way he plays. John Beilein referenced McGary’s all-out style when talking about the progression of his health and what initially looked like a bad injury against Houston Baptist last Saturday.

“Every time he dives on the floor something else could come up here or there — not in his back, but in other areas,” Beilein said. “You saw him sprain his ankle in the game (against Houston Baptist). He’s playing with a great big quad contusion right now. So is Jordan Morgan.”

This is the conundrum for the coaching staff: when is rest the most important thing for a player, and when does his cardio need to be pushed?

“You’re always trying to get them healthy and get their cardio up but at the same time, you can make them really good for practice but then they’re beat by the game, so that’s the thing were juggling with.”

Beilein said that despite the various nicks and dings he expects everyone to be ready to go on Saturday against Arizona.