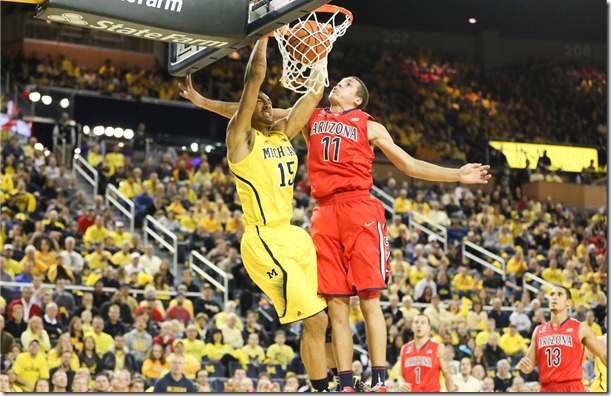 The signature win that John Beilein’s young Michigan team so badly needed was right there for the taking. The Wolverines led by eight points with seven minutes to play and just had to play strong defense to ice the game down the stretch.

A Caris LeVert three that would have stretched the lead to 11 points rimmed out and the wheels began to fall off. The Michigan defense, which had been pushed to the brink against Arizona’s interior length, finally collapsed. Arizona scored on its final 11 possessions of the game to turn a 58-50 Michigan lead into a 72-70 Wildcat victory. Arizona big men Brandon Ashley and Aaron Gordon dominated in the final quarter of the game and the Wolverines simply let the game slip away.

The game left Michigan, 6-4, with more questions than answers. Players were adamant to point out that a game like this wouldn’t have been close two weeks ago, insistent that they were improving, but the inability to make defensive stops down the stretch is just one of many problems facing the Wolverines through 10 games. Highly touted freshman point guard Derrick Walton was rendered ineffective and All-American big man Mitch McGary finished with just 8 points and four rebounds. The Wolverines got great performances from Glenn Robinson III (20 points on nine shots) and Caris LeVert (15 points) but it wasn’t enough.

Michigan’s offense was effective in both halves, although the recipe for success changed. In the first half, the Wolverines were able to push the pace and get some transition buckets – both threes and dunks. That opened things up and Glenn Robinson III got going in the halfcourt with some open shots and also some great individual efforts. Arizona adjusted its defense in the second, moving Aaron Gordon to defend Robinson, and took away a lot of the action that was successful for Michigan in the first. But the Wolverines adjusted to a high ball screen and dribble drive approach that resulted in Caris LeVert and Nik Stauskas combining for 19 points and 16 of Michigan’s 21 field goal attempts in the second 20 minutes. The Wolverines had 8 assists on 14 makes in the first compared to just 1 assist on 10 made field goals in the second but were fairly consistent with halftime splits of 1.19 PPP and 1.12 PPP.

The Wolverines scored 1.16 points per possession for the game against a defense that had surrendered over a point per possession just once this season, 1.02 to Cal Poly in the season opener. That’s a very good offensive game, well beyond what should be required to win. Michigan shot 52% on twos and 47% on threes for a 58% effective field goal percentage and even got to the free throw line more often than Arizona. The Wolverines struggled with turnovers early in the game due to some helter-skelter transition play but settled down in the second half. Michigan had only six offensive rebounds on 26 misses but actually outscored Arizona 9-8 in second chance points.

The Wolverines had no answer for Aaron Gordon or Brandon Ashley down the stretch. Both players were a combined 10-of-14 from the floor in the second half after going 5-of-13 from the floor in the first. The duo dominated around the basket as they were able to take Michigan’s big men off the dribble or overpower the Wolverines on the offensive glass.

There’s no sugar coating it: this loss hurts. Good teams win at home, especially when they are winning in the final 10 minutes of play. Michigan is now just 6-4 on the season and still has to play Stanford at the Barclays Center next Friday and Holy Cross at Crisler before Big Ten play. The Wolverines non-conference season has been a disappointing and they let a win that would have righted the ship slip away.