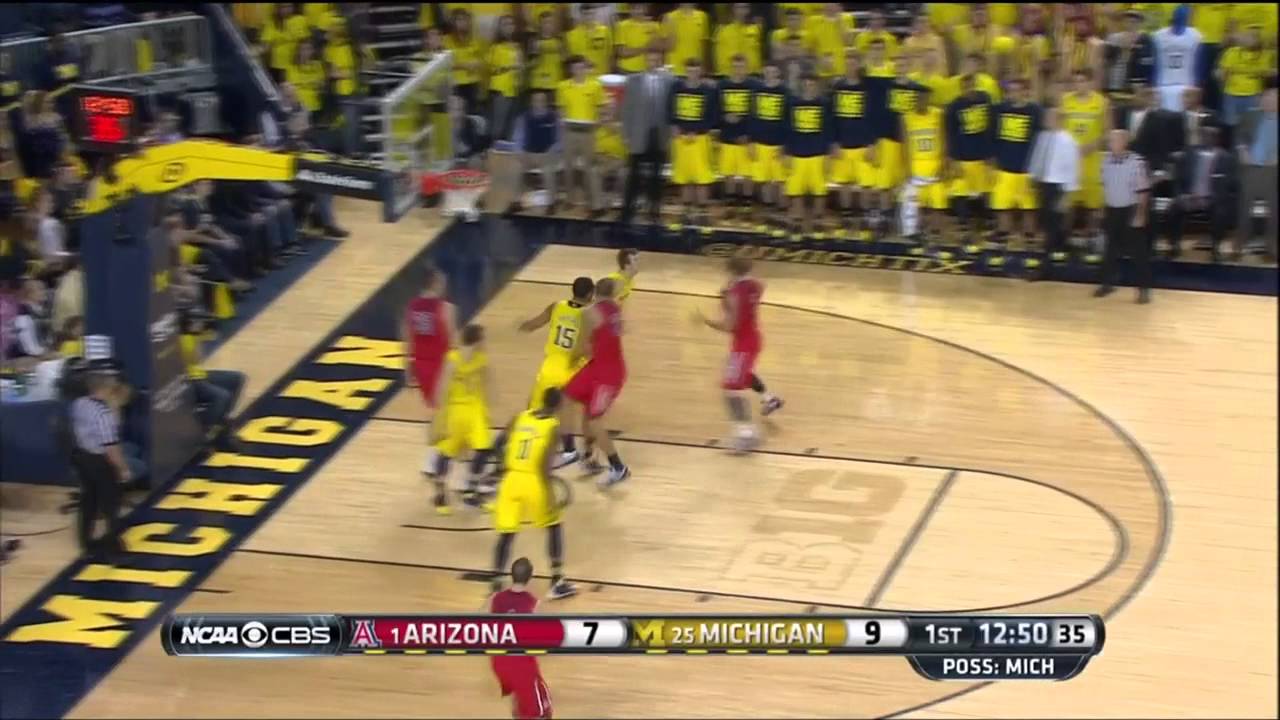 1) Jon Horford plays good defense in the first half

Jon Horford was very good defensively against Arizona for the most part, and he had an especially dominant first half guarding the paint. Michigan’s redshirt junior notched four blocks in the opening frame alone and contested Arizona at the rim with physicality. That being said, one thing stands out more than anything else in these clips: the sheer volume of offensive rebounds for Arizona and its amount of looks near the basket. Horford may have been contesting shots, but it seemed as though that was his focus instead of corralling defensive rebounds — just as important to a good defense as blocked shots (probably more so, actually). In this clip alone, I counted six offensive rebounds for Arizona. On the first play of this clip, we can see Horford rotating to the basket with no awareness of where his man, Kaleb Tarczewski, is on the court. However, Horford ends up blocking Rondae Hollis-Jefferson to get Michigan the ball. On the next play, it gets worse. Horford is watching the ball and doesn’t notice Tarczewski streaking down the court for Gabe York’s miss — the only reason the big man didn’t slam home the follow was because Nik Stauskas got a hand on the ball. Horford then blocks York after he gets the offensive rebound. This was supposed to be a positive look at Horford’s defense but the lack of boxing out is just too glaring to ignore: on the next play, Horford has Brandon Ashley, who killed Michigan all night. Horford completely ignores him when helping down low and makes no attempt to box him out, as we see Ashley easily streak through the lane and get his hand on the ball for the tip-in. In the first half, those second-chance shots weren’t falling. In the second half, they did. Horford had some nice defensive plays in this sequence, but he just has to have more awareness when boxing out.

One of the major bright spots in this game was Glenn Robinson III in the first half. In a season that has been a bit of a disappointment for Robinson so far, it was great to see him finally take the reins and make something happen — and against the No. 1 team in the country, no less. These two plays displayed a growing confidence in perhaps Michigan’s most talented player, which is an excellent sign going forward. The first play was particularly encouraging because of Robinson’s physicality. It often feels like the sophomore is bigger and stronger than he realizes, and when he gets stopped on drives its puzzling because of his frame. But on this play, Robinson makes a very strong 0ne-on-one move to the basket and embraces the contact from Ashley, forcing his way around him and getting to the rim. Simply a tremendous individual effort from Robinson, and one it seems he should be able to replicate. The next play, Robinson did his best Trey Burke impersonation. With the clock winding down to halftime, Robinson bobbled a pass from Nik Stauskas on the perimeter before gathering it back up, faking the dribble-drive, and shooting the fadeaway three. He nailed it and secured an unexpected nine-point lead for Michigan going into the break. It was the perfect end to a half that had seemingly been overwhelmingly in Michigan’s favor: the Wolverines hit 55 percent of their threes, Arizona couldn’t buy a bucket, and Robinson was having the game of his life. Robinson had a terrific first half but disappeared in the second: after scoring 16 points in the first stanza, he ended up with 20 for the game.

3) Caris LeVert takes over in the second half

Michigan defensive woes occurred early and often in the second half. Much of the attention surrounding Michigan’s lack of defense is centered around the final three or so minutes, and rightfully so. However, the beginning of the second half saw Arizona close a nine-point gap with astounding ease. In just five minutes, Michigan’s lead had shrunk to two. Enter: Caris LeVert. The sophomore went gangbusters in the second half, scoring 10 points in the latter frame alone. And from the 18:25 mark straight through 11:24, LeVert was directly responsible for every single Michigan bucket. If LeVert hadn’t stepped up, Michigan could have found itself out of the game with 10 minutes left. The vast majority of LeVert’s scoring was due to tremendous one-on-one effort. The first play is pretty simple — LeVert receives the ball late in the shot clock and hits a contested three with Ashley in his face. On the next play, we see why there isn’t a player on Michigan’s team who reminds us more of Trey Burke than LeVert. He expertly uses a high ball screen from Horford, taking Ashley out of the play completely, then utilizes a killer hesitation move to get the step on Tarczewski. LeVert then finishes an acrobatic layup with contact and completes the 3-point play. At that point, Michigan had gone four minutes without a field goal. From there, LeVert was oozing confidence. On no play was that more apparent than on the following play in this sequence. Palming the ball at the top of the key, LeVert crosses up Rondae Hollis-Jefferson and uses a Horford screen to get Tarczewski on him again, this time finishing with the left hand at the rim. Finally, LeVert throws a perfect alley-oop lob to Glenn Robinson III.

In this game, it’s fitting that Michigan was undone in the final minute by an offensive rebound. TJ McConnell got a decent look at the basket, but his shot caromed off the front of the rim at a bad angle and was batted around in the air for a while. McConnell corralled the 50-50 ball after his own miss.  While Michigan was bad on the defensive glass all night and on this play Caris LeVert simply fails to box out the shooter. LeVert stands there while McConnell crashes and is able to chase down the ball that Rondae Hollis-Jefferson tipped up in the air.

From there, Nick Johnson made a solid decision off a high screen and roll, drawing the foul on Mitch McGary. The merit of this particular call is open for debate. Greg Anthony clearly thought the foul shouldn’t have been called, and I tend to agree with him. Especially in the final minute with the offensive team down one, it seemed like an anticlimactic way to hand over a huge advantage in such a well-played and exciting game. Also, the contact was not only minimal but initiated by Johnson. I’m not sure what McGary should have done. His hands were up the whole time. But in big games, sometimes the calls don’t go your way. There was a lot Michigan could have done in the first 39 minutes of this game to avoid this situation altogether.

Here is what John Beilein had to say about this final play:

What we were going to do was try to run a quick-hitter and then call timeout and see if we had it open. Nik (Stauskas) elected to shoot the ball. He ended up getting a pretty good look. He opted out of what we had just a little bit to get a look but that was the idea. If we didn’t get a clean look on that first play, we were calling timeout. Rather than call timeout and waste 10 seconds, let’s see if we can get something clean. And then we had two possessions left with maybe 18 seconds to go in the game if we get seven or eight. So we decided to go. We missed the shot, but ended up getting a pretty good look.

So it’s not as though Stauskas deviated much from the general idea of the set. He tried to get an open look, and listening to Stauskas talk about it after the game, he thought he was open. While there was some space between Stauskas and Johnson, it was definitely a contested shot and it appeared as though Stauskas didn’t have complete control of the ball going up. It felt as if Michigan could have gotten a better shot, especially out of a timeout. Stauskas is going to be the one with the ball in his hands at the end of games, and just like that player for Michigan last year, Michigan fans hope misses like these are precursors to makes later on in the season.