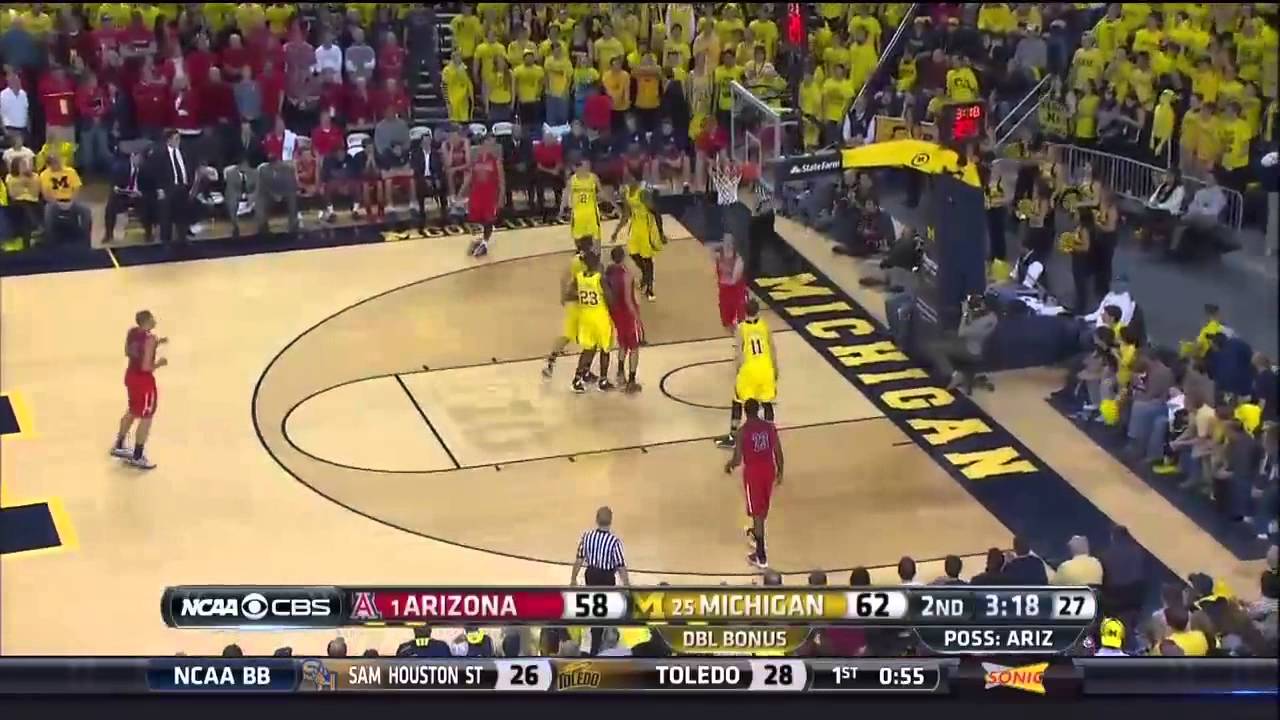 Early on in his post-game press conference, John Beilein was asked about Arizona’s defense — how the length of the Wildcats forced Michigan to work for every shot in the 72-70 loss at the Crisler Center on Saturday. (Photo: Dustin Johnston)

Beilein acknowledged it was at times difficult to find openings, but said one thing definitively.

“Offense was not the issue,” the coach said.

He’s right. The offense was quite good: Michigan scored 1.16 points per possession for the game, registered an effective field goal percentage of 58.6 and even got to the line with more consistency than Arizona. It was the defense that came up short at crucial points and allowed the Wolverines to give away a 58-50 lead with eight minutes to go.

This is a major divergence from the narrative of Michigan’s losses to this point. Against Charlotte, the Wolverines registered a paltry 0.86 points per possession and a dismal 35.2 effective field goal percentage on their way to a close loss; versus Iowa State, Michigan was held to below one point per possession; finally, in their loss to Duke the Wolverines registered the same per-possession output as they did against Charlotte when the scoring over the final nine possessions is excluded from the data. Suffice to say, so far this season, it’s been offensive, not defensive woes that have plagued Michigan. On Saturday, the loss was largely the result of poor defense.

Arizona scored on its final 11 possessions, an achievement that brought the Wildcats’ final points per possession number to 1.19 — the highest number Michigan has allowed this season. It was essentially the stretch that decided the game. After the jump we look at video of Arizona’s possessions from Michigan’s 58-50 lead until Mitch McGary’s foul with 25 seconds left on the clock and examine what went wrong.

Arizona had two back-breaking offensive rebounds to extend possessions but Michigan’s ball screen defense struggled down the stretch. The Wolverines stopped hard hedging ball screens and Arizona made them pay with their ball movement. In the first half, Michigan mostly hedged hard with its bigs and switched one through four. Down the stretch, Michigan’s ball screen defense was plagued by mental errors and confusion.

On the first possession in this clip (pictured above), after Michigan hits the ball out of bounds, we can see Horford not really hedge on the high screen as he allows Arizona to rotate the ball in rhythm. Michigan ends up getting burned when Caris LeVert provides help defense, Glenn Robinson III doesn’t provide his help and Aaron Gordon is open underneath.

On the play after that (above), Glenn Robinson III and Derrick Walton both stick with Walton’s man after the ball screen and leave Brandon Ashley wide open for a jumper. This seems like a communication where Walton expected a hedge and Robinson expected a switch.

After a strong move an assist in the post on the third possession, Arizona goes back to the ball screen on possession number four (above). Robinson and Albrecht switch the ball screen but McGary and Albrecht don’t communicate and both players chase Brandon Ashley to the high post, leaving Aaron Gordon open for an easy basket despite Caris LeVert’s late help defense.

On the next play (above), the lack of a hedge was especially pertinent. With Robinson on the ball, McGary elects to essentially give TJ McConnell the edge, allowing once again for easy ball rotation.

After the game, Jon Horford stressed the need for tougher defense, especially in a game that was so winnable in the final stretch with just a few stops.

Glenn Robinson III, a player whose offensive explosion was overshadowed by failures in team defense, agreed.

“At close-out time we just have to learn to close out, you know?” the sophomore lamented. “We needed just one stop. They have a good team, and give credit to them. It was hard to get that last stop in the last three minutes.”

The numbers say the Michigan’s defense wasn’t bad for the whole game, just the second half. But in this case, it appears the numbers could be just a tad dishonest. It’s true that Michigan held Arizona to just 0.90 points per possession in the first half, but this was due in a large part to the Wildcats’ inability to make putbacks off offensive rebounds. Really, in the second half, Arizona just started making them.

For the game, the Wildcats corralled 48 percent of their misses — about their season average. In the first half, when Michigan was supposedly playing significantly better defense, Arizona rebounded 49.2 percent of its misses but made only 33 percent of its twos, a large number of them missed layups coming from offensive rebounds.

Defensive rebounding is a big part of a successful defense, and no matter how you slice it, Michigan had an abysmal day on the defensive glass on Saturday. Nik Stauskas said at times Michigan turned the rebounding battle into a “jumping contest.”

“For the most part this season, our coaches said, we were leading the Big Ten in not letting opposing teams get offensive rebounds,” Stauskas said. “Today, they had so much size in the frontcourt. We were doing the best we could, but we can’t make it a jumping contest. When they have length like that, we have to make sure that we hit them and box them out.”

The continued lack of boxing out, combined with Arizona’s rediscovered ability to make shots in the paint, spelled doom for Michigan. The Wolverines couldn’t rebound for most of the game, and couldn’t stop the Wildcats in their half-court offense to close it out. Beilein went to the “sixty-six” lineup very late and even showed some 1-3-1 in an attempt to throw Arizona off, all to no avail.

Michigan has had its share of issues this season — every step forward appears to be accompanied by a step back. On Saturday, the Wolverines took a big step forward on offense against one of the best defensive teams in the country. But in the end, as Beilein said, it came down to defense.

“It was all about our defense late” Beilein said. “We’ve got to continue to get better angles, we’ve got to defend so that people don’t get the ball in their sweet spots, because they got the ball in their sweet spots way too much. So we went with that ‘sixty-six’ lineup there to try to switch a lot of things late. Turned out, it worked really well — we got a stop, and they went to the foul line. We didn’t get a chance to do it enough. But it’s what we do, it’s what all our coaches love doing. Going from this hurdle over the next hurdle. There’s plenty of things to grow from.”