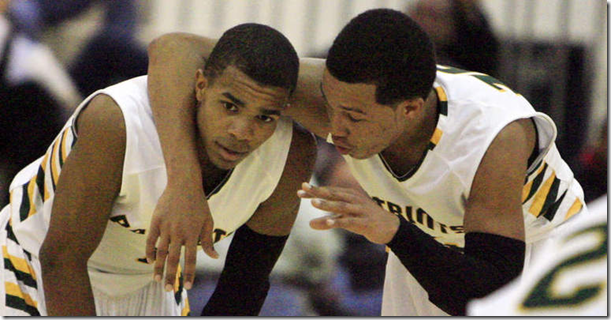 In today’s recruiting roundup we look at how current commitments are performing but also discuss some new class of 2015 targets including a five-star forward and an under the radar combo forward.

DJ Wilson had 11 points, 10 rebounds and three blocks in a win over Salesian, 11 points in a 66-60 win over Richmond and 11 points, 10 rebounds and six blocks in a win over Camplindo to advance to the championship of the Gridley Invitational. Capital Christian topped area No. 2 Sacramento 78-75 in the finals and Wilson added 16 points in the victory. Capital is 5-0 on the season ranked first in the area by the Sacramento Bee.

Chatman was efficient against Parkrose and his small high school will challenge itself with some difficult games early on.

The Michigan-bound Chatman hit 9 of 11 shots and scored 26 points to lead Columbia Christian (3-1). The 6-foot-8 Mkrtychyan, who signed with Idaho in November, scored 23 points, including 11 from the free throw line.

Because it has two college Division I signees, Columbia Christian beefed up its December non-league schedule. The Knights have a double-digit win over Class 5A Madison, and Friday night lost by two points to Benson. Later this month, Columbia Christian plays four games in the MaxPreps Holiday Classic in Palm Desert, Calif.

Columbia Christian has two more games before Christmas and then will travel to to the Max Preps Holiday Classic in California.

Doyle is averaging 30 points and 11 rebounds on the season but will face a big test at the City of Palms Classic this week. Bishop Verot hosts the prestigious national tournament every year and will open the event against Milton High School (GA).

Jalen Coleman had a team-high 23 points in a 68-48 win for La Lumiere over Gary Roosevelt.

Brunson, a 6-foot-1 point guard who averaged 22 points per game as a sophomore, has already learned from some of the best. His father, Rick Brunson, was a journeyman who played for eight different NBA teams. That included 54 games with the Chicago Bulls.

“My dad is definitely my role model,” Jalen Brunson said. “Just what he was able to achieve … it’s in the same kind of boat as what makes my ship float, so to speak.”

Jalen Brunson’s father was also a guard, which gave him someone to emulate.

“I look at his game and look at what he did and I want to try and do what he did, maybe even go past it,” Jalen Brunson said. “My dad won a state championship [in Massachusetts] in high school and I want one too. I mean yeah, I’ve met guys like Michael Jordan and grew up friends with [Charlotte Bobcats small forward] Michael Kidd-Gilchrist and people like that, but my dad [is] who really motivates me in a positive way.”

Could Brunson be the best point guard in the class of 2015? Scout.com’s Brian Snow thinks he just might be.

Michigan has started recruiting class of 2015 forward Chase Jeter. Jeter is Stephen Zimmerma’s teammate at Bishop Gorman. The 6-foot-10 power forward is the consensus No. 22 player in the class of 2015.

LaVall Jordan was on hand watching both players in Chicago and Jeter is hearing from the Wolverines.

Michigan assistant coach LaVall Jordan was at the Chicago Elite Classic to check out Jeter and Chase has been monitoring the Wolverines this season.

“I like the way they’re playing so far early in the year,” Jeter said of Michigan. “I continue to watch the programs recruiting me and enjoy the recruiting process.”

The duo of Bishop Gorman bigs battled against Cliff Alexander and had an up and down performance with Michigan looking on.

Headed into the game, the question was how the Gorman juniors would handle Alexander. Both Zimmerman and Jeter have length and skill, but they are both quite lean while Alexander is arguably the most physical player in the country. That physicality proved to be too much as he big-boyed his way to thunderous jams, beat shots off the backboard and used his strong hands to rip rebounds away from well above the rim.

Both Zimmerman and Jeter had their moments, but struggled at different points. Jeter grabbed nine rebounds and scored six points, but foul trouble limited him to just 20 minutes. Zimmerman had 10 points, 13 rebounds and three blocks, but struggled from the floor, missing 13 of 17 field goal attempts. There’s no reason for concern with either of the Las Vegas products and the game clearly illustrated how important it is for the duo to get stronger. Louisville‘s Rick Pitino showed up to check out the duo and Michigan had an assistant on hand while Coach K and assistant Jeff Capel from Duke were surely keeping tabs as well.

Zimmerman admits he may have to cut his list soon.

“I’m going to have to soon. I might not want to,” Zimmerman said of a list. “Knowing that it’s a really big decision, that’s probably the biggest thing.”

A new class of 2015 target on Michigan’s recruiting radar, Sam Miller is a 6-foot-7 forward known for his perimeter shot. Michigan reached out to Miller last week, according to his AAU coach. The Gonzaga College (D.C.) product had a big showing at the Gonzaga Classic over the weekend. Miller impressed Scout.com:

With Gonzaga trailing by double-digits for most of the second half, Miller, who stands 6-foot-7, started to impose his will. He has a lot of potential on the offensive end. While he didn’t get many post touches, he took advantages of the ones he did and usually wound up at the free throw line. He also knocked down a 15-footer, hit a catch and shoot three-pointer and rebounded his area. He’s shown great improvement since last year and is starting to draw high major looks.

Miller has high-major offers from Rutgers and Penn State but his recruitment is expected to expand this season.

Sam Miller finishes with 17. Needs some help without Bryant Crawford. Also needs to assert himself for length of game. Ton of talent

What I saw from Henry Ellenson and JP Macura yesterday was at a level that makes you think further than college. Outstanding.

Boudreaux had 28 points and 16 terbounds in a win over Lake Zurich, his fifth consecutive double-double performance.

Eron Gordon had an up-and-down performance at the Tipoff Classic, but bounced back with a big second half.

Gordon, the 6-2 sophomore standout, hurt Greensburg with a flurry of fourth quarter points to keep the Panthers in the game. Gordon scored 14 of his 33 points in the fourth. He finished 13-for-28 from the field, including 3-for-13 from the 3-point line and 10-for-15 from the free-throw line.

Josh Jackson stood out at the Horatio Williams Foundation Tip-off Classic, according to Branden Hunter for State Champs Network.

Detroit Consortium 2016 small foward Josh Jackson: Arguably the best player in the state, and the top sophomore in the country, Jackson had an okay season opener. The 6-8 Jackson only went for 27 points, 22 rebounds and 6 blocks against Detroit Frederick Douglass. He got off to a slow start, forcing the issue a bit, a turning the ball over, but picked it up in the second half. Jackson was just simply better than anyone on the floor, and even triple-teaming him couldn’t stop him from making plays. It’s no wonder just about every program in the country wants him.