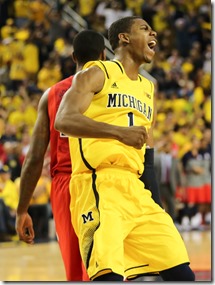 Our weekly feature tracking the performance of Michigan players performance over two game segments of the season. (Photo: Dustin Johnston)

It’s tough to play better, or more efficiently, than Glenn Robinson III played over the past two games. Against Houston Baptist and Arizona, Robinson missed a combined four field goal attempts — he was 6-of-9 against the Huskies and a crazy 8-of-9 against the Wildcats. We have already analyzed Robinson’s scoring against Arizona quite a bit, but it’s sake to say it was the sort of breakout game Michigan fans have been waiting all season for. There is some consternation about his “disappearance” in the second half, but it’s worth noting Caris LeVert, Nik Stauskas and Mitch McGary combined for 24 points in the second stanza and Michigan’s offense didn’t suffer horribly — the Wolverines scored 1.19 PPP in the first half compared to 1.12 in the second. Not every player can score all the time, and different players are featured at different times in an offense that strives to be as balanced as Michigan’s.

[myo_poll poll=54772 type =”bar” perc=”yes”]
Michigan backup point guard had a great week for someone used on just 15.5 percent of Michigan’s possessions. Spike Albrecht was effective in 18 minutes against Houston Baptist, scoring three points on his only field goal attempt and handing out six assists without turning the ball over. He was also very good on Saturday against Arizona when playing significantly more minutes. Albrecht played 25 minutes and scored 10 points on 3-of-4 shooting from the 3-point line. He also dished out four assists, finding Glenn Robinson III a few times for easy baskets. here is no denying the sophomore has a significantly better handle on the offense, and a more reliable jumpshot, than his freshman counterpart, Derrick Walton. It will be interesting to see how John Beilein handles their minutes going forward.

Michigan’s go-to wing scorer was good but not great this week after recovering from his ankle injury, which kept him out of one game and probably limited him somewhat against Duke. Nik Stauskas’ stat line was good against Houston Baptist but looked like one from last year: nine 3-point attempts compared to just two from inside the arc. Against Arizona, Stauskas was quiet in the first half but a bit louder in the second, scoring 14 points somewhat inefficiently: the sophomore was 3-for-7 on twos, 1-for-4 on threes.

Jon Horford scored six points against Houston Baptist in limited minutes and pulled down six rebounds. On Saturday, his effectiveness against Arizona was double-sided. He played more (17 minutes) and registered four blocks, which was great. That said, he also had only four rebounds, which is not as great. His blocks often came at the expense — or as a result — of failing to box out and not get defensive rebounds. In a game where Michigan desperately needed better rebounding from its bigs, it’s tough to see Horford’s blocks as a net positive.

Michigan’s All-American big man hasn’t really been playing like one. That may seem a bit harsh, but the Wolverines simply need more from McGary than what he’s providing, and they especially needed it on Saturday. McGary had one defensive rebound against Arizona in 23 minutes. To be fair, he scored eight points and made all of his free throws, and he also managed three offensive boards. But it’s that lone defensive rebound, when that was Michigan’s greatest weakness in that game, that stands out.

The main reason for LeVert’s low score this week is because he was nearly invisible against Houston Baptist — 1-for-4 for four points, two steals, an assist and a turnover. He was more active against Arizona, but mostly in the second half. LeVert scored 10 of his 15 points in the latter frame and he wasn’t terribly efficient doing it — the sophomore was 6-for-15 from the field for the game.

Michigan’s freshman point guard actually had a very good game against Houston Baptist: he made all three of his 3-pointers and all but one of his free throws to notch 14 points. But Walton just had a really tough night against Arizona. The Detroit native was clearly, and understandably, overwhelmed by the Wildcats’ experience and talent. Michigan coaches kept him on the bench for most of the game — he played only 14 minutes, his lowest total of the season.

Saturday’s matchup against Arizona was tough on both of Michigan’s freshmen, but you could argue Irvin got the worst of it. The freshman played only five minutes and was brought in mostly as a defensive replacement, especially late in the game. While he had 14 points in 20 minutes against Houston Baptist, his benching against the Wildcats overshadowed that performance.

After playing a mere nine minutes against Houston Baptist and scoring four points, Jordan Morgan was kept on the bench for most of Michigan’s game against Arizona. The redshirt senior played only three minutes and the only statistic he recorded was a foul.