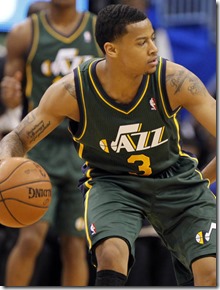 A periodic check up on former Wolverines in the NBA, abroad or elsewhere in college basketball.

Trey Burke is emerging as a legitimate Rookie of the Year candidate after sitting out for the first month of the season with a broken finger. Burke had a career high performance against the Orlando Magic – the team he had hoped would draft him No. 2 overall in June. Burke finished with 30 points, 8 assists and 7 rebounds in the Jazz victory.  Burke’s 30 points were a season-high for a rookie this season and he was the first rookie since Blake Griffin in 2011 with a 30/8/7 stat line.

Utah is a 6-7 since Burke returned to action after starting the season 1-11 without him. Burke is averaging 12 points and five assists per game. Despite missing 12 games, Burke is a legitimate Rookie of the Year candidate.

He also appears to have added a block M tattoo on his right arm.

While Burke was expected to make an early impact, Hardaway’s early success has been a present surprise. Hardaway is averaging eight points per game for the Knicks and is outplaying some more veteran players. Hardaway wrote a rookie blog for Mens Fitness. He’s worried about sleep:

The biggest transition off the court has been sleep. There just isn’t enough of it. In college, you can get away with certain things because you have class or you can go to bed a little earlier because you have to study. Now there’s a lot more traveling, more games, and appearances. You have to learn to balance your time wisely. But I’ve still found some time to take in the city.

Crawford, known as one of the top sixth men in the NBA, got his first start in 101 games with the Clippers. Crawford is averaging 16 points per game for the Clippers and is the longest tenured Wolverine in the league with 13 years of service.

Darius Morris was waived by the 76ers in late November and has worked out for the Memphis Grizzlies and is under consideration by his former team, the Los Angeles Lakers.

Douglass is playing for Galil Gilboa in Israel with former Wolverine DeShawn Sims. He also started a blog. Douglass is averaging 7.7 points and 1.7 assists in 22.7 minutes per game.

Sims is also playing for Galil Bilboa after going to training camp with the Boston Celtics this fall. Sims is averaging 14 points and five rebounds in 27 minutes per game, coming off a season best 26 points and five rebound effort on Saturday. Sims has played in the D-League, South Korea and Lebanon since graduating.

Harris made a big debut for the Los Angeles D-Fenders in the NBA Developmental League, scoring 41 points. Harris is averaging 29 points per game through three contests with the D-Fenders, he played in Ukraine last season.

Petway is averaging 7 points and three rebounds in 14 minutes per game for Olympiacos, the top team in the top league in Greece. He has also played in France and for the Harlem Globetrotters.

Shepherd is playing in Italy (third division) for Omegna, where he’s averaging 22 points and six rebounds per game. Shepherd is also still involved with the Canadian National Team,

Sims plays for the SK Knights in SOuth Korea, averaging 9 points and six rebounds in 16 minutes of playing time per game.

The oldest Wolverine still playing professionally, Asselin is playing for La Bruixa d’Or and averaging 8 points and four rebounds per game. He’s also played in Iran, Puerto Rico and a handful of other Spanish clubs.

Hunter has bounced around in the D-League with the Fort Wayne Mad Ants and has plyaed in three games this season, averaging 12 points and six rebounds per game.

There are plenty of former Wolverines elsewhere in college basketball this season as well.

Smotrycz has started 10 games for the Terps, averaging 12 points and seven rebounds in 29 minutes per game.

Tummala has played in 10 games, averaging 6 minutes and 2.4 points per game for the Sun Devils.

McLimans started the first four games of the season, averaging 7 points and five rebounds in 28 minutes per game for the Redhawks, but his career will be cut short. McLimans is leaving the Miami program voluntarily due to an illness in his family.

Brundidge has started every game for Detroit, averaging 9 points, three rebounds and two assists in 23 minutes per game. His shooting numbers haven’t improved much 37% on twos, 29% on threes but he’s getting to the free throw line.