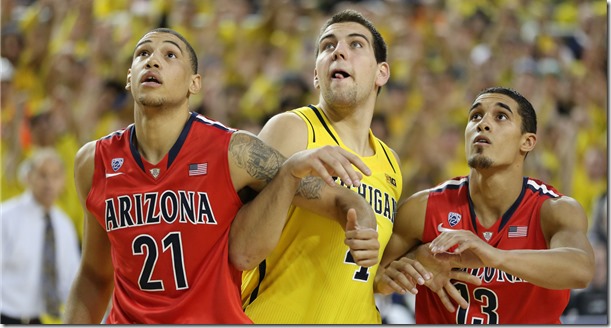 After Michigan’s 72-70 loss to Arizona on Saturday, a few Wolverines mentioned the need for their team to get tougher. These comments came after Mitch McGary called out his team for being “soft” after Michigan lost to Duke earlier this season.

Nothing could have brought that point home than the way Michigan lost to Arizona at home. With their offense as productive as it was, all the Wolverines needed were a few stops on the defensive end and a few more defensive rebounds and they’re coming off a weekend win over the No. 1 team in the country.

And it’s not only that — John Beilein said on the Michigan Insider on Thursday that with better defense, Michigan could be looking at an entirely different narrative to this season.

“If you really look at our 6-4 record, we’re two stops from being a really, really good 8-2. I mean a really good 8-2, with two stops,” Beilein said. “But we have to get those stops. The only way we get it is we have to be better defensively. Part of being better defensively, you’re going to box out every time. Whether you can get the rebound or not, you have to do that. You have to be able to stay in a stance, be ready to rotate, all these things that we haven’t done when we play the really good teams.”

Some have proffered the idea of relying more on a two-big lineup, something Beilein has experimented with off and on throughout the early season. The coach offered a three-part rebuttal to the suggestion he break it out more: there are limits to what Michigan can do offensively in that set, it didn’t guarantee better rebounding against Arizona and Michigan’s defensive rebounding percentage has been very good this season.

“It’s an option for us. The biggest thing with us is having to second big play perimeter defense. Ashley gave us huge problems, staying in front of him and matching up with him. We continue to work at it, but it’s going to affect our offense as well,” Beilein said. “We had, going into that game, the best defensive rebounding percentage in the Big Ten. So that’s why we don’t do that. One of the times they had four rebounds in a row, we had our two bigs on the floor. It’s not always that. We just have to continue to work on the technique and fundamentals of our defense.”

Mitch McGary not at full strength for “a variety of reasons”

One major running obstacle for Michigan this season has been the continued rehabilitation of its Preseason All-American center, Mitch McGary. The sophomore was largely ineffective against Arizona, scoring eight points and pulling down only one defensive rebound in just 23 minutes.

Beilein said on Thursday that McGary is just not playing at 100 percent.

“Right now, Mitch can’t go 100 percent. He can’t do what he can, and that’s for a lot of different reasons,” Beilein said. “He’s a high-motor guy, he’s an energy guy, and when your body cannot do that right now for a variety of reasons, it’s going to hold him back. We just have to keep working and working to get him healthy and get him in superior shape.”

Whether the “different reasons” are simply the continued training required to get McGary in proper shape after missing the whole fall or something having to do with his injured back, Beilein didn’t elaborate. For whatever reason, Michigan doesn’t have its star big at full strength, and it showed against Arizona.

Beilein knows his team needs McGary, and said the coaching staff is doing all it can to get him back to where he needs to be.

“We have a great plan for him this week. We did a little bit last week, but we changed the plan for this week,” Beilein said. “With the end in mind of getting him healthy and getting him in the best shape he can be in given the bumps and bruises that he has right now on his body. We just have to continue to — he’s a very willing participant in the things that we’re doing. Part of it is obviously the high cardiovascular training, part of it is weight training, part of it is rest, part of it is treatment, there’s all kinds of things. Believe me, every hour he has that he’s not involved in his final exams and final papers, is involved in trying to get him back to a level that he can perform at his best.”

Derrick Walton has been assigned one of the toughest tasks any freshman point guard could ask for: following in the footsteps of a Player of the Year and subsequent NBA lottery pick. While the Detroit native has shown flashes of talent, it’s been a tough road for Walton so far this season.

Against Arizona, Walton played the fewest total minutes of his Michigan career (14) and backup point guard Spike Albrecht took over the bulk of the point guard duties.

Beilein added that Walton having an experienced backup is a luxury that Trey Burke never had in his career at Michigan — but that a backup is what Albrecht remains.

“I think that’s the big difference with the freshman point guard we have this year. Trey burke had no backup. He had no experienced back up when he was a freshman,” Beilein said. “Derrick Walton’s got a heck of a backup, and he will remain as a backup. He’s just got to keep working and working and he learns every day. And he’s a terrific young man, terrific player.”