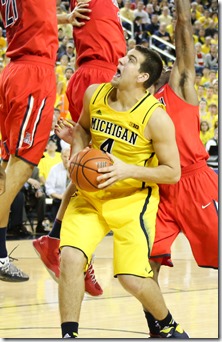 Michigan may have to play without Mitch McGary on Saturday, when the Wolverines take on Stanford at the Barclays Center in Brooklyn. Why? The All-American big man is veritably wracked with injuries.

After going on the radio yesterday and speaking of McGary’s “variety” of injuries, Beilein was asked for specifics on Friday. While he wouldn’t provide any specifics on exactly what the injuries are, he did elaborate on his original statement.

“I’m not going to tell you the variety. He’s injured,” Beilein said. “He’s injured in more places than I care to mention. So we tried to put a week in of no contact, no bounce, just cardio and then put him in action. We’ll practice him today. Near 100 percent? He’s not even close.”

Beilein said McGary did not participate meaningfully in the first two practices of this past week, and now his practices are being evaluated in order to determine his status for Michigan’s game against the Cardinal.

Asked whether he’s considered shelving McGary for the game, Beilein responded in the affirmative.

McGary’s “variety” of injuries can be reasonably inferred by piecing together various injury reports throughout the season. It obviously begins with his back, which may or may not still be bothering him. Then he sprained his ankle against Houston Baptist and was in noticeable pain on the court before springing up and getting to the bench. Throw in what Beilein called a “great big quad contusion”, and you’ve got a decent idea for what is likely ailing the center.

McGary’s absence would be a tough blow against a team with Stanford’s height — as Dylan noted in the preview, with a starting lineup of 6-foot-2, 6-foot-6, 6-foot-7, 6-foot-10 and 6-foot-11, the Cardinal are ranked 14th in effective height.

Michigan is coming off a game against Arizona that saw them crumble on the defensive glass, an area of strength for McGary. While the sophomore notched only one defensive rebound against the Wildcats, we now have a clue why.

“There were several rebounds in that game (against Arizona) — that wasn’t Mitch McGary going for that rebound, that’s somebody that is hurting,” Beilein said. “We’re going to try to get him healthy, and we’re trying to get him in better shape. When you’re hurt, you can’t burn calories. We got his cardio I think in better condition but getting him healthy is hard.”

The Wolverines know just how important a healthy Mitch McGary is to their team. Nik Stauskas spoke with the media on Friday as well, and mentioned McGary’s ability to rebound and push the ball as attributes they will miss if he’s out.

“Having Mitch out there makes a big difference for us,” Stauskas said. “We need him to be 100 percent healthy to be the Mitch we know he can be. When he’s out there hedging ball screens, rebounding, running the floor, pushing the ball, those are the things we need Mitch to do. When he’s healthy, he’s really good at that.”

For his part, Spike Albrecht also wants to see McGary on the court, though he expressed confidence in other bigs’ abilities to step in for the injured star.

“For us, any Mitch is a good Mitch. He brings a lot of energy to this team, a lot of passion. He always goes out there and plays really hard,” Albrecht said. “Whether or not he plays, that’ll be up to the coaches. but we have other guys who are capable of stepping up and making plays. Guys like Jon Horford, J-Mo (Jordan Morgan), Max (Bielfeldt), we need them to step in and be the next guy up. They’re going to be big in this game.”