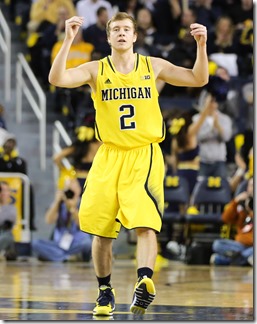 Michigan has been playing in the land of giants throughout this non-conference season. After beating Florida State (ranked 5th in effective height according to Ken Pomeroy) and then losing a heartbreaker to Arizona at home (13th), the Wolverines will travel to Brooklyn to take on Stanford (14th). (Photo: Dustin Johnston)

The Cardinal go 6-foot-7, 6-foot-10, 6-foot-11 in the frontcourt, and their guards are no shrimps either. But not only is Stanford tall — they’re surging. The Cardinal will be entering this game having just beaten Connecticut in Stoors, no mean feat for any team. According to John Beilein, one of the reasons Stanford appears to be on the rise this season after a tough loss to Pittsburgh earlier in the season is because of its experience.

Three juniors and two seniors start for the Cardinal. This puts them in stark contrast for Michigan, who starts a freshman point guard and four sophomores (if Mitch McGary is healthy, that is).

“They’re a very veteran team that has been close to the NCAA tournament, have an NIT championship,” Beilein said during a press conference on Friday. “This could be the year when they finally break through and get in the NCAA’s and maybe make a run because of how talented and how experienced they are. We got our work cut out for us.”

In this age of high-major college basketball, when one-and-dones rule, Stanford stands out because its players have stuck around. But it also stands out for another reason. Stanford coach Johnny Dawkins employs one of the most famous offenses in basketball, but one that hasn’t been especially popular on the college level: the triangle.

Beilein said it’s an offense that he’s studied, but he couldn’t recall going up against it in his long career.

“They have a unique Tex Winters triple-post offense — the Chicago Bulls, Michael Jordan, obviously Phil Jackson offense,” Beilein said. “Which frankly I’ve never played against. I’ve seen pieces of it, but never to this degree. So that’s been almost like preparing for a Princeton game because our kids aren’t used to it.”

Michigan reaching the tail end of a brutal non-conference schedule

USA Today college basketball writer Nicole Auerbach recently sat down for an extended interview with Beilein, and during the course of the interview he touched upon a wide variety of subjects. One was the exceedingly tough non-conference schedule Michigan played this season, especially when compared with last year.

During his press conference on Friday, he elaborated a bit on the challenges that come with playing such a difficult schedule so early. He also highlighted that often, scheduling non-conference opponents can be a bit of a crapshoot.

“When we scheduled this game (against Stanford), we had no idea who we’d be playing in the Big Ten-ACC challenge or where it would be,” Beilein said. “I don’t think we had anticipated that Iowa State would get a fifth-year point guard that is a tremendous player and a junior college player that’s a tremendous player. Those are sort of anomalies at our level, to have two people show up out of nowhere. So it turned out to be a difficult schedule for the top teams we’re playing, where we’re playing, etc. I think obviously when we scheduled Arizona four years ago, we thought they’d be pretty good, but not clearly the best team in the country.”

In classic Beilein style, the coach is embracing the process of growing from playing such stiff competition as a young team. Though he did admit having a few more wins coming out of it would help his mood a bit heading into the Big Ten season.

“You’re trying to establish, for your team and for your league, some consistency in non-conference play,” Beilein said. “We just haven’t been able to do that against top-100 teams. I think Florida State will be a quality win somewhere down the road, but the losses we have had have not done anything to boost us. This (game against Stanford) would be a good one to have because I think down the road they’re going to be a top-50 team as well, and playing on neutral floor against a top-50, that’s another one. Because we know in our league we’re going to have a lot of those opportunities. You’d like to get them outside of your conference.”

On the season, Spike Albrecht plays about 40 percent of available minutes. Derrick Walton plays about 60 percent. With a few exceptions, that breakdown has been pretty consistent throughout the year.

Against Arizona, that split in minutes was flipped: Albrecht played 25 minutes, while Walton played only 17. Part of it was due to Walton’s inexperience going up against a fourth-year point guard in TJ McConnell. But it’s impossible to deny the offense ran smoother with Albrecht on the floor.

Even so, Albrecht continues to mentor Walton. He said the learning curve is always steep with freshman and Walton is handling the situation with aplomb.

“I’m helping him as much as I can,” Albrecht said. “He’s doing a great job with it, but there’s just so much to take in as a freshman. There’s such a learning curve. He’s really doing a good job with it. He’s learning and continuing to grow as a freshman point guard.”