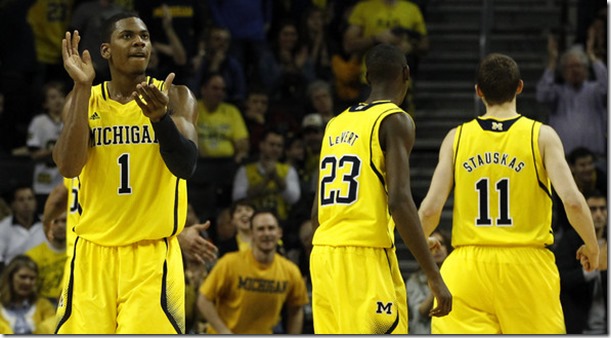 It wasn’t pretty but it was a win that Michigan needed badly.

Several of the same problems that have plagued the Wolverines this season were present once again but Michigan finally found a way to win a close game down the stretch. The Wolverines let another lead slip away late, struggled to defend in transition and were forced into a nail biter despite seemingly controlling the game from the opening minutes.

Michigan took the lead with 14:42 to play in the first half and would never give it back but never pulled away. The Cardinal managed to hang around just close enough and cut the lead to a single possession twice in the final minute of play despite trailing by double digits with 7:30 to play. With the game on the line, Michigan’s most experienced players answered the call down the stretch. Glenn Robinson III drove the ball from the high post for a layup and Nik Stauskas buried a pair of free throws to seal the win.

The win won’t eliminate Michigan’s faults but the Wolverines finally conquered some adversity to hold onto a victory down the stretch. The Wolverines were shorthanded without Mitch McGary and beat a good Stanford squad on a ‘neutral’ court in Brooklyn. Considering it was just Michigan’s second win over a team with a winning record this season, the result was a positive step in the right direction.

Michigan managed 1.05 points per possession, its least efficient offensive output in a win this season, thanks to timely shooting and a lot of free throws. Michigan gave the ball away on just 12% of its possessions but struggled with its perimeter shooting, going just 8-of-27 from long range. While 52% of Michigan’s field goal attempts were from 3-point range, it was still aggressive attacking the basket. Michigan attempted 26 free throws and was 13-of-25 (52%) from inside the arc. That’s not the mark of a team that just fired up threes but the offense was very reliant on the secondary break. The box score credits Michigan with just four fast break points but the Wolverines were undoubtedly at their best pushing the ball and exploiting Stanford in unsettled defensive situations.

Stanford scored 1.01 points per trip and while there were certainly flaws with Michigan’s defensive performance, there were also some positives. The Wolverines dominated on the defensive glass, rebounding over 80% of Stanford’s misses and allowing just seven second chance points. The Cardinal shot 40% from three-point range but only attempted 10 triples. The Wolverine defense struggled much more with Stanford’s interior attack. The Cardinal scored 34 points in the paint and forced Michigan’s big men to be whistled for 14 fouls. Stanford attempted 18 free throws in the second half, compared to just two in the first, and those freebies almost enabled a comeback. Chasson Randle scored 18 points in the second half after going scoreless in the first and the Wolverines didn’t have an answer for his penetration.

There’s no sugar coating it: Michigan needed this game. It wasn’t a great performance but it was good enough and provides a valuable opportunity to build some momentum. With Holy Cross next weekend and then a critical trip to Minnesota before a couple more winnable conference games, the Wolverines will need to build on this win and try to start Big Ten play with some victories before the conference schedule heats up.