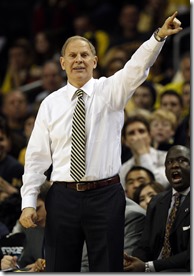 With Mitch McGary out for Michigan’s 68-65 victory against Stanford, it was up to the three Wolverines rotating at center — Jordan Morgan, Jon Horford and Max Bielfeldt — to step up. While they weren’t perfect, the committee of big men answered the call and made plays down the stretch integral to Michigan’s important win in Brooklyn.

Morgan notched the lion’s share of minutes at the five with 24. Bielfeldt followed with 12, and Horford was on the court for six. Together, the trio held down the center spot for the Wolverines. Michigan doesn’t know how long McGary is going to be sidelined. But as long as he’s absent from the lineup, Michigan’s bigs know there are opportunities to be had.

“We just had to stay ready,” Morgan said during the post-game press conference following the victory. “All three of us, we knew we’d have an opportunity today with Mitch down. Max came in today and he was ready, he’s been practicing really well. He stepped in and had great minutes for us. Jon, he had limited minutes but he made big plays too. He had a great pass down the stretch. I think it was about all of us just staying ready for when that moment came.”

The way the referees called the game inside complicated matters for John Beilein and resulted in a revolving door for Michigan in the post. This was especially true when it came to Jon Horford. The redshirt junior started the game but racked up five fouls in the mere six minutes he was on the court. He was far from the only player in foul trouble — Morgan eventually fouled out and Bielfeldt ended up with four.

Beilein said he never considered burning freshman forward Mark Donnal’s redshirt, though for a while it seemed as though he’d have to in order to avoid an all-guard lineup.

“It was going to be a very physical game from the beginning and they called it very tight, but it was consistent,” Beilein said after the game. “That’s what most of us coaches want, is this consistency. So as a result, we just had to scramble.”

As it turned out, each player contributed to Michigan’s victory in his own way.

Morgan had the most impact and played one of his best games of the season. Michigan’s elder statesman finished with eight points, five rebounds, an assist and a steal. But much of his contribution occurred outside the stat sheet. In the first half, Morgan made an absolutely terrific outlet pass to Caris LeVert after corralling the defensive rebound, initiating a fast break; LeVert then got the ball to Nik Stauskas downcourt for a dunk. Later, Morgan drew a charge in the second half. Throughout the game, he consistently poked the ball away on entry passes and fronted his man effectively.

Bielfeldt contributed solidly, though at times it was clear he was overmatched. He fought hard inside for his three rebounds, and drew a foul going after one on the defensive end. He also forced a travel in the second half in providing help defense.

Horford only played six minutes but still managed to contribute — his pass from the high post to Glenn Robinson III cutting baseline for a dunk was one of the more heads-up plays of the game.

“I was just doing what we work on every day,” Morgan said of his performance. “Staying connected with my teammates, making plays to help us win. Taking charges, things like that, just doing whatever I can. It’s just about us bigs being ready to step up if someone is down or we have foul trouble or anything like that.”

Michigan’s center-by-committee strategy worked with McGary out, but it was complicated significantly by how tightly the referees were calling the game inside. This seemed to be an especially difficult obstacle for Horford. But at the end of the day, the bigs made plays.

This is especially true if you count Robinson as an honorary member of the club of Michigan centers. The sophomore made arguably the biggest play of the game from the center position after Morgan fouled out late, facing up his defender at the top of the key and driving to the hoop for a left-handed finish with 14 seconds left.

“Coach asked me if I could play the five and I said, yeah if the team needs me to do that,” Robinson said. “We just ran our regular offense. Good thing I paid attention a little bit in practice.”