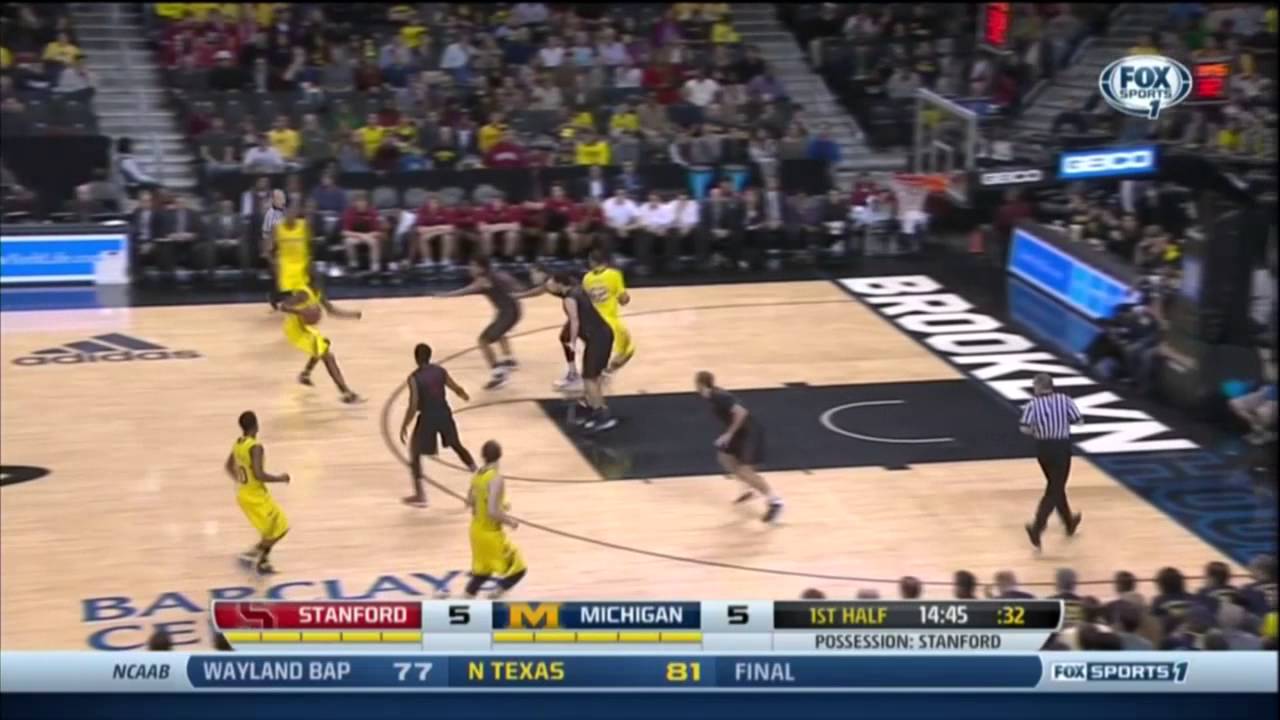 During Michigan’s 68-65 victory over Stanford in Brooklyn on Saturday night, Glenn Robinson III continued his steady progress toward being comfortable as a playmaker in Michigan’s offense. The sophomore didn’t waste any time commanding the offense early — after Stanford jumped out to a 5-0 lead, it was Robinson who finally scored for Michigan, through a set and with a move that looked suspiciously like the set used to get him going early against Arizona. Caris LeVert again sets an off-ball screen for Robinson as Robinson cuts across the lane, allowing Robinson to post his defender up near the block. Robinson then employs the same jump-stop maneuver, using two dribbles and a hop to get around his defender and attack the rim. This set is a great example of the Michigan coaches intentionally forcing the issue for Robinson, something the Michigan fan base has been clamoring for all year. On the next play, we see Robinson get a good look and a foul on the secondary break — a very useful tool for Michigan’s offense throughout the game. Robinson receives the handoff from LeVert, hesitates to get his defender on his heels, and takes the ball aggressively to the hoop. Finally, Robinson takes a page from his friend Mitch McGary’s book, grabbing a defensive rebound and taking the ball coast-to-coast for the foul. Michigan runs a ton of action through top-of-the-key screens on the fast break, and Robinson expertly uses a screen by Max Bielfeldt to turn around his defender and get the step.

2) Zak Irvin gets hot from the 3-point line

Michigan’s talented freshman is beginning to make a name for himself as a shooter. However, his first shot in this sequence cannot be said to attest to that. After receiving the pass from Robinson, Irvin clearly puts way to much on the shot and luckily banks it in. The rest of his production in the first half looked much better. On the next play, we again see Michigan utilizing the secondary break. The Wolverines love trailing threes, and this play is a perfect example why. If hit in rhythm, a 3-pointer from the trailing Wolverine on the fast break allows him to step into the shot and gives him extra rise. For Irvin, he confidently knocks this one down despite good defense from Stanford. It’s clear from this play that Irvin has the green light — a wise move by the coaching staff as Irvin is 14-of-27 in his last five games after starting the season 6-of-22. This 3-pointer gave Michigan some breathing room after Stanford tied the game at seven following a long offensive drought for the Cardinal — after Irvin’s two threes and a layup by Morgan, Michigan held a 15-9 lead. Finally, we see Irvin rise up and hit after another run by Stanford. The Cardinal clawed back from a seven-point deficit to cut Michigan’s lead to two when Irvin knocked down his third 3-pointer of the half. Nik Stauskas uses the dribble-drive against the zone, a strategy that Michigan under-utilized all night. Stauskas draws the eyes of every Cardinal  defender before firing a pass out to Irvin on the wing for the triple.

3) Michigan makes a second-half run to establish some distance

At about the 15-minute mark in the second half, Stanford was refusing to go down. Stanford had been hanging right with Michigan and after Anthony Brown made a jumpshot to bring the Cardinal to within two, Michigan needed some answers on offense. First, Derrick Walton had one of his bright spots in a game that didn’t see many of them for the freshman. Against the zone, Walton uses a Jordan Morgan screen to drive between the two guards at the top of the zone. Walton then pulls up and fires from the free throw line, hitting the two late in the shot clock. The next play in the sequence is a good example of Michigan creating offense while Stanford was still setting up its defense, even if it couldn’t be counted as a “fast break” bucket. Stanford is still clearly off-balance when Glenn drives to the basket and then takes the ball baseline, getting the ball to Nik Stauskas. Stauskas easily drives past a bad close-out, getting to the hoop and drawing the foul. This next play doesn’t happen if Robinson didn’t command respect as a scorer earlier in the game. Stauskas hands the ball off to Robinson cutting up on the perimeter, and both Robinson’s and Stauskas’s defender are focused on Robinson. This leaves Stauskas wide open, flaring out on the wing. Robinson gets him the ball and he knocks it down. Finally, Michigan gets out on the fast break. Robinson does a nice job as the ballhandler on the break, getting the ball to Stauskas streaking down the right side, drawing the foul. This run took Michigan from being up only two points to being up nine with 11 minutes left.

4) Glenn Robinson III makes the play of the game late

Nothing illustrates Robinson’s newfound comfort in Michigan’s offense better than this almost-final offensive play for the Wolverines. Up two points with about 25 seconds left, Michigan needed a bucket to place itself in good position heading into the final minutes. John Beilein turned to Robinson. It was a simple isolation play. Robinson was actually playing the center position because both Jordan Morgan and Jon Horford had fouled out of the game. Knowing he was matched up with a bigger, slower player, Robinson received the ball at the top of the key and simply took his man off the dribble. The sophomore finished through contact and with his left hand, putting Michigan up by four. Here’s what Beilein had to say about the play call: “There are always good things to put (Robinson) going in the right direction. He hasn’t had to do that very often. There was no question in my mind, based on the matchups, what we were going to do on that one. We had run the one before to Nik and just blew it up a little bit. So we were going to go right to (Robinson) with something that we really thought could open the floor.”

Unfortunately, Stanford wasn’t quite done. more specifically, Chasson Randle wasn’t quite done. The Cardinal guard utterly abused Michigan’s defense in the second half, scoring 18 points in the second half. Beilein said it would have been tough for his team to do much to stop Randle from streaking to the basket, but still — stop the ball. Somehow. And if you’re going to foul him, make sure he can’t possibly make the basket. Instead, Micigan allowed Randle to bring Stanford to within one.

Not much to say hear. Stauskas was intentionally fouled with seven seconds left, and the career 82 percent free-throw shooter stepped up to the line and knocked down two big ones. Michigan was only up one at the time, and this allowed the Wolverines to play the 3-pointer instead of worying about a possible tie with a two. After the game, Beilein said he didn’t even think of fouling and eliminating the possibility of Stanford making a 3-pointer at the buzzer to tie it.

“That was going to be very important that we weren’t going to foul on a 3-point shooter,” Beilein said. “I didn’t think of fouling with the two-pointer, never done that, and I didn’t want anyone to foul somebody while they were shooting. If we were ever going to put that in, we gotta work at it more. Don’t foul, make them shoot a three in your face, switch every screen.”