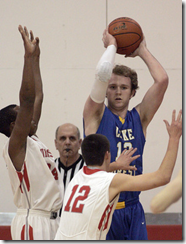 Bacari Alexander was at City of Palms to watch Doyle play.

Capital Christian is 10-1 and will play in the Max Preps Holiday Classic today. Wilson’s squad is the fourth highest rated team nationally in the event.

Columbia Christian rolled to three easy victories: 69-25 over City Christian, 65-29 over Damascus, and 71-26 over Open Door. Chatman had 24 points, eight rebounds and seven assists in the win over Damascus.

Chatman’s team will also play at the Max Preps Holiday Classic, Chatman is the highest rated prospect at the national event.

John Beilein was out to watch Luke Kennard last week and the Franklin, Ohio native continues to put up monster numbers this season. Kennard is still considering Kentucky, Duke North Carolina, Ohio State, Michigan, Louisville, Florida, Michigan State and Indiana while Kentucky is presumed to be the leader for his services.

Brunson had 17 points, five rebounds and four assists in a 78-36 win over Urban Prep-West. He continued to impress scouts in attendance.

Jalen Brunson w athletic no look dime in lane. Followed by his signature step back. Best 2015 PG I have seen nationally

Brunson also had 20 points, six rebounds, three assists and three steals in a 52-51 win over Warren. Brunson scored the final nine points of the game for Stevenson.

Here’s a Ball is Life summer mixtape of Brunson in action.

Bishop Gorman lost to Bishop O’Dowd at the Tarkanian Classic. Jeter had 13 points and eight boards in the loss while Zimmerman had 6 points on 3-of-6 shooting. Zimmerman had 19 points in a 63-53 win over Valor Christian and Jeter added 12 in the victory.

Michigan assistant coach LaVall Jordan was in Vegas to watch both players at the tournament.

Here’s a scouting report on Jeter’s performance at the event.

One of the west coast’s elite prospects in country showed some serious strides in his game since the last time we saw him. A much more explosive athlete, Jeter had no problem going up in the paint to finish two handed dunks in traffic. He also showed off a much improved frame and showed off a gorgeous jump hook, explaining why the likes of Indiana coach Tom Crean were in the house to watch him.

LaVall Jordan was in to watch junior big man Barret Benson. Benson had 15 points, 13 in the second half, in a comeback win over Leyden. He also alleid an 18 point, 10 rebound double double in a win over Geneseo.

Ahrens has picked up recent offers from Vanderbilt and Oakland while Butler was at one of his recent games. Ahrens has performances of 31 points, 10 rebounds and six assists and 23 points, 11 rebounds and 11 assists already this season.

Davis had 19 points in a 62-54 win over Bay City Western and and 32 points in a 71-56 win over Southfield Christian. Here’s footage of him scoring a career best 34 points earlier this season.

Thornton had a big showing at the Tarkanian Classic, evident in the video highlights above. Rodger Bohn was impressed with Thornton’s performance:

The top point guard in the class of 2016 lived up to his rep, controlling the game in a win over Montrose Christian. He shot the ball well from beyond the arc, got the ball to teammates in scoring positions, and played great defense. A collision that resulted in a ton of Derryck’s blood on the floor took him out of the game temporarily and allowed Montrose to come back, but it was still an outstanding performance from the nation’s best sophomore lead guard.

Bridges updated his recruitment with Scout.com ($) and reported that Bacari Alexander is trying to get him to Ann Arbor for a visit. The 6-foot-6 forward transferred to Huntington Prep and is hearing from Michigan State, Kansas, Michigan, Indiana, Providence and West Virginia

TJ leaf lived up every bit of his reputation and exceeded it at the Tarkanian Classic. The face-up power forward caught our eye over the summer with the Compton Magic and looked even better with his Foot Hills Christian squad. While the offense was ran through him primarily, the sophomore did an outstanding job of sharing the ball while still dominating in the scoring column. He used his skill to drill deep three pointers, utilize up and unders, and finish at the cup with either hand. TJ also provided a presence on the defensive end with his length, showing why just about every high major school in the country is after him and is quickly establishing himself as a top-15 player in the class.