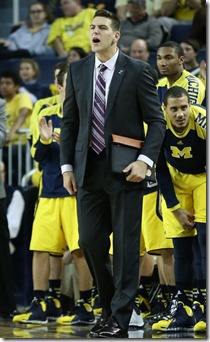 Mitch McGary has decided to undergo back surgery in an attempt to heal what has been called a “lower back condition.” The injury has been ailing the big man since August and caused him to miss the entire preseason and much of the regular season. After rehabbing furiously to get back on the court, another flare-up of the back issue precipitated the decision for surgery.

The Preseason All-American is out “indefinitely” and potentially for the rest of the season.

On Friday, McGary and Beilein addressed the decision before assembled media at the Crisler Center. The sophomore said it has been very painful playing through the injury, and that pain was compounded by more run-of-the-mill bumps and bruises such as a bad ankle and a thigh contusion.

“I think it all added up and it was a little overwhelming just because I wasn’t back in the shape I wanted to be and it just added up over time,” McGary said on Friday.

McGary said many different factors went into his decision to have surgery.

“I definitely didn’t want to injure my body more than it needs to be, so that was something going into it,” McGary said. “I rehabbed for such a long time and tried to play through it. Overall I just wanted to get it over with, get it in the past, work on my health and get 100 percent again.”

There is not a timetable for McGary’s recovery following surgery, but the University said in an official statement that its medical staff expects the big man to “make a full recovery.”

Beilein mapped out the timeline of the injury, from when it first became an issue up to the present time.

“It took a long time to make this decision because of the fact that he’s worked and rehabbed and done so much all the way back from August,” Beilein said. “But when the issue came up again with the condition in the last couple weeks, we met with a lot of people and Mitch decided it was in his best interest for his long-term health to go ahead and have surgery.”

From the outset of the injury, which occurred during the offseason, Beilein said the prospect of surgery was on the table. However, McGary wanted to try to rehab the injury first in an attempt to make a full recovery in time for this season.

“(Surgery) could have been an option. There were all kinds of options we were looking at,” Beilein said. “Anybody who has a bad back, I think — but we were trying to avoid that as much as possible. I’m telling you, that young man was at rehab every morning, it seems like five or six mornings a week … He did everything. Now when it came back the last two weeks, it was like, when is this going to get better? And the surgery seemed to be the best option for him.”

When McGary was asked if his decision to return to school weighed on him after an event like this, he said he chose not to think about it. He added that he has no regrets.

“When the time comes, we’ll get to there and figure that out,” McGary said. “But right now I just really want to get focused on having the surgery and getting on the bench and cheering my team on.”