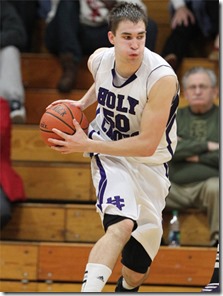 Michigan looks to close the non-conference season on a high note, returning to action against Holy Cross on Saturday after a short holiday break.

The Crusaders are projected to finish in the upper half of the Patriot League and travel to Ann Arbor with a 6-5 record and a Ken Pomeroy computer ranking in the top 150. While Holy Cross will provide an upgrade in talent over many of Michigan’s other non-league home games, the majority of which were against teams in bottom third of Division I, the Crusaders have mostly beaten the very bad teams and lost to the above average games on their schedule this season.

Holy Cross did give North Carolina a slight scare, falling 62-54 in Chapel Hill in November, but its best wins have been over Albany, Hartford and Fairfield with losses to Harvard, UNC, Belmont, Hartford and Canisius.

The Holy Cross offense is ranked 174th nationally in adjusted offensive efficiency. The Crusaders shoot the ball fairly well – 49% on twos, 36% on threes for a 51% effective field goal percentage – but thrive at the free throw line where they attempt 50 free throws per 100 field goal attempts (45th). In the half court, an impressive 47.2% of Crusader field goal attempts come at the rim. Holy Cross doesn’t do a great job of holding onto the ball, giving it away on just shy of 20% of its offensive possessions, or crashing the offensive glass. Holy Cross rebounds just 29% of its missed shots, 260th nationally, and is just 1-5 this season when it rebounds less than 30% of its misses.

Holy Cross touts the 149th best defense in the country and it’s a defense that thrives in the areas where its offense struggles. The Crusaders are best at forcing turnovers and cleaning up the defensive glass. Holy Cross opponents give the ball away on 20% of their offensive possessions and rebound just 28% of their misses. Holy Cross struggles to defend the three, opponents shoot 36% from long range, and its overall field goal defense suffers as a result. The Crusaders allow a 50% eFG% on the season, 178th best nationally, despite a fairly stout (48% 2-point shooting) interior defense. Holy Cross is 5-1 when it holds opponents under a point per possession and just 1-4 when the opposition cracks that mark. Michigan has been held below a point per trip just twice this year, at Iowa State and against Charlotte.

6-foot-9 big man Dave Dudzinski (right) leads the Crusaders in scoring and rebounding. The senior uses a quarter of Holy Cross’s offensive possessions and is shooting 51% on twos. He’s also capable of stepping out and hitting a three (11-of-24). Dudzinski is a viable rebounding threat on both ends and attempts 43 free throws per 100 field goal attempts.

Taylor Abt and Malcolm Miller are the only other Crusaders to have started every game this season. Miller is a low usage but efficient wing. The 6-foot-6 junior shoots 57% on twos and 44% on threes and is Holy Cross’s best shot blocker. Abt starts but plays just 39% of available minutes and can finish around the basket but is limited offensively.

True freshman wing Malachi Alexander comes off the bench but averages 10.1 points per game. Alexander isn’t the most efficient shooter – 49% on twos, 19% on threes – but he gets to the free throw line effectively and is an above average defensive rebounder.

Sophomore guard Eric Green has stepped into the starting lineup and is averaging eight points per game, Green appears to by the Crusaders’ best perimeter defender with a top-100 steal rate.

5-foot-9 junior Justin Burrell starts at point guard. He’s a solid setup man and can hit the three (41%) but struggles with turnovers and shoots just 29.7% on twos. He’s backed up by 5-foot-10 freshman Anthony Thompson. Thompson missed last game due to injury but is a more efficient scorer than Burrell, mostly because he’s attempted more free throws than field goals this season.

The Crusaders have also been without Cullen Hamilton. The 6-foot-3 guard was averaging 16 points per game but has missed the last six games due to injury.

Ken Pomeroy’s projections like Michigan, with a 92% chance of victory, to cruise in this one by a final score of 76-62. Michigan’s strengths – not fouling and not turning the ball over – seem to negate Holy Cross’s top traits and the winner of those statistical battles should have the upper-hand. The Wolverines can’t afford a slip up heading into the Big Ten season and the opportunity of a blank conference slate.

This & That: Michigan is 2-1 all-time against Holy Cross but the Crusaders beat the Wolverines on March 18th, 1948 at Madison Square Garden in the quarterfinals of the NCAA tournament.