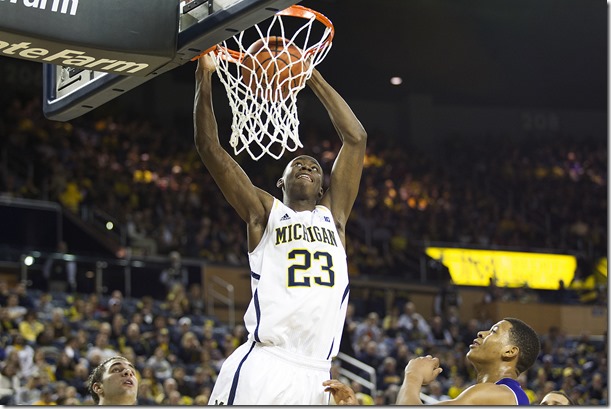 All eyes were on Jon Horford and Jordan Morgan to see how they reacted to the pressure of replacing Mitch McGary but Michigan’s wings stole the show in an easy 22 point win over Holy Cross.

The Wolverines pushed the ball consistently and the Crusaders had no match for Michigan’s ability to attack the basket in a game that deteriorated into glorified pick up ball in the second half. Glenn Robinson III tallied a career high 23 points while Caris LeVert and Nik Stauskas both added 16.

Horford and Morgan were solid in relief of McGary, combining for 16 points on 7-of-10 shooting and 10 rebounds, but the Wolverines ran away with the game thanks to their ability to attack the rim off the bounce.

Michigan’s offense never missed a beat from the opening tip-off, scoring 88 points in 66 offensive possession. The Wolverines were most effective in transition but hummed along throughout the game with 61% 2-point shooting and 44% 3-point shooting for a 63% effective field goal percentage. Michigan’s offensive aggressiveness was evident throughout the stat sheet: 19 free throw attempts, 16 second chance points and 70% of field goal attempts inside the arc. The Michigan offense crushed low-major competition this year, scoring 460 points on 329 possessions for 1.39 points per trip, and this game was no exception.

Defensively, Michigan’s performance left a bit more to be desired. Holy Cross scored a point per possession, making this Michigan’s worst defensive performance against a low-major team this season. The Wolverines’ saving grace was their ability to take away free points at the charity stripe. Holy Cross only attempted 10 free throws to 61 field goal attempts and they all came in the second half. The Crusaders entered the game scoring 27% of their points at the stripe and earned just 11% of their points at the stripe at the Crisler Center. Michigan also controlled the defensive glass, rebounding nearly 80% of the Crusaders’ misses.

However, the Holy Cross shooting numbers were more troubling. Michigan’s interior defense was fairly stout – the Crusaders shot just 40% on twos – but the Wolverines surrendered too many open looks from three-point range. Holy Cross was 10-of-23 (44%) from long range and while some of the looks were very deep, most were very open. Holy Cross’ two most effective offensive players were 5-foot-9 point guard Justin Burrell (14 points on 8 shots) and 6-foot-8 big man Dave Dudzinski (17 points on 16 shots), who just happen to play the positions where Michigan has the most questions to answer.

Non-conference play is in the books and Michigan’s 8-4 record is about as disappointing as the news that Mitch McGary will be sidelined for a long time (potentially the rest of the season). The Wolverines started the season with a bunch of questions to answer and have generated more questions rather than answering the ones already on the table. How good is Michigan? No one is really sure. The Wolverines have some great wing talent in Robinson, Stauskas and LeVert but have to figure things out the one and five positions in Big Ten play.