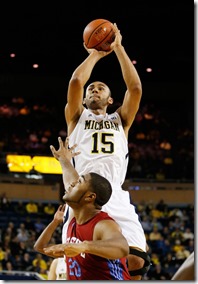 The news that Mitch McGary, Michigan’s preseason All-American and starting center, will be out indefinitely following back surgery next week was devastating for the Wolverines. But what does it mean for the rest of the team?

The two players most immediately affected by the news are Jon Horford and Jordan Morgan. The two elder post players will be the players asked to step up and produce in McGary’s stead. It’s unreasonable to ask Morgan and Horford to produce on the level of McGary, but Michigan will need them to play their games and contribute.

During a press conference officially announcing the surgery on Friday, John Beilein expressed confidence in all three of his big men, saying they have experience and have come through in big moments before.

“Jordan Morgan has won a Big Ten championship, he’s led a team picked 11th or 12th in the Big Ten to a NCAA tournament, he’s played a lot of games and a lot of minutes,” Beilein said. “I think for him, he needs minutes to get back to where he was and he could never get that last year. So, excited for him and Jon Horford, and Max [Bielfeldt] as well.”

Bielfeldt, forgotten at times this season and throughout his career, now becomes a critical cog in Michigan’s rotation. The 6-foot-7 sophomore played a season-high 12 minutes at Stanford and will be needed as a third option.

“Max doesn’t get the reps — we don’t have enough players for a scout team,” Beilein explained. “So that’ll be hard, but at the same time Max will have to perform. He’ll play probably in every game going forward.”

Michigan’s three-headed monster in the post got some early run with McGary being out against Stanford last Saturday. While the bigs racked up a combined 14 fouls, overall they performed admirably in the sophomore’s absence.

While the trio no doubt is feeling sorry for McGary and would rather see him playing, they must look at this situation on some level as an opportunity. This is especially true for Morgan: the big man played a combined 23 minutes in Michigan’s three games prior to its matchup with Stanford — against Stanford, he played 24.

Beilein said he saw things he liked from all three of his bigs against the Cardinal.

“Jordan, defensively he did some really good things on a few occasions,” Beilein said. “He got some good finishes around the hoop, Jon as well. Jon made a no-look high-low pass that is one of the best passes I’ve seen since I’ve been here. Those were things we can build on. Those two and Max as well need confidence in games. You don’t build that playing 5 or 10 minutes a game, and now I think they’ll have that.”

The focus will be on Michigan’s remaining three big men and how they produce with McGary out, but the talented sophomore’s injury means there must be a team-wide shift in offensive aggressiveness. Some players appear to already be turning that corner — Glenn Robinson III, for one, has played two straight games where he showed a newfound take-charge mentality on the offensive end.

“Maybe you saw that (shift in aggressiveness) a little bit from Glenn Robinson III in our game against Stanford,” Beilein said. “More aggressive, really did some good things in that game. So everybody’s got to have that mindset now. While Jon and Jordan feel bad for Mitch, they’ve got to be excited about this, their opportunity. Are we rebuilding and restructuring everything? No. But we’re taking our offensive and defensive plans and changing them to better suit a team without Mitch McGary.”

This will be the tricky part. McGary’s talent and versatility makes him such a game-changer that much of the offensive and defensive strategy changes when he’s not on the court. Morgan can anchor a disciplined defense and Horford can block a few shots and get on the defensive glass, but neither player can impact a game like McGary.

Michigan will likely attack zone defenses a bit differently without McGary — the big man was an expert passer out of the high post, but without him the Wolverines must rely on running their perimeter players in and out of the free throw line area against the 2-3. Michigan fans will also likely see much less of the two-big lineup. Already somewhat endangered, that lineup with Jon Horford and Jordan Morgan as the two bigs simply lack offensive potency.

The good news is that Michigan has been playing without McGary for significant stretches this season, and many of these shifts in strategy are already well along. But their permanence ultimately makes the Wolverines a more predictable team. Not knowing whether or not he would have McGary has left Beilein scrambling at times.

“One of the options we wanted this year was to play through him more,” Beilein said. “So we were preparing for that in the summer and the spring. And then all of a sudden the injury comes and we can’t do that. Then he starts coming back and we move back to that, and now we’ve got to go back again. So it’s better than nothing that we’ve been there, but at the same time we have to change a little bit some things that we’re doing.”

How Michigan responds to losing McGary will decide its season. There’s no denying the team is better with him in the lineup. The question now is how good they can be without him.